ABC's Emma Alberici and Sky News' Caroline Marcus have a twitter tiff over marriage equality, John Lyons to head investigative journalism at the ABC, and other media news.

Today in Media Files, the ABC’s Emma Alberici and Sky News’ Caroline Marcus go head-to-head over marriage equality, and The Australian‘s John Lyons will be the ABC’s new head of investigative journalism.

Good feud guide. It was the battle of the newsreaders on Twitter yesterday, as Lateline host Emma Alberici reacted to Sky News presenter Caroline Marcus over her Daily Telegraph column about same-sex marriage. Marcus had argued that dislike for marriage equality activists was encouraging people like her to vote no in the upcoming postal survey. Alberici tweeted a “WTF?” about the column, which prompted a series of tweets between the pair, with Alberici calling Marcus a bully.

The Australian, Tony Abbott, Miranda Devine and Peter van Onselen all joined in. Fairfax Media also joined in by wrapping up the spat, but it wins the day for its photo of Marcus at Sydney’s Mardi Gras parade in 2010.

Last week, ABC editorial policy manager Mark Maley emailed all news staff reminding them to be impartial in the same-sex marriage debate, and to be “circumspect on social media”.

Lyons to head investigative journalism at ABC. The Australian‘s former Middle East correspondent John Lyons is moving to the ABC as head of investigative and in-depth journalism. Lyons has just released a memoir of his time based in Jerusalem, in which he tells of the trouble he had with former Weekend Australian associate Nick Cater and the Jewish lobby in Australia, who didn’t want his work to run in the Inquirer section of the paper. The editor-in-chief at the time, Chris Mitchell, had to intervene to make sure Lyons’ work would be included.

Lyons is a former editor of The Sydney Morning Herald, and executive producer of Nine’s Sunday program. He is currently associate editor (digital content) at The Australian.

Opera critic rinses Age arts coverage. The Age‘s now former opera critic has ruffled some feathers in an article about his reasons for quitting. Michael Shmith has written for the Australian Book Review, saying he quit after he pitched a review of a Melbourne Lyric Opera production, which arts editor Hannah Francis said she did not have room for. Shmith submitted the 300-word piece anyway, to which Francis reportedly said, “no means no”, before saying she was more likely to consider reviews from bigger companies.

Harrison’s crowdfunding attempt for Seven. Former Channel Seven employee Amber Harrison has launched a crowdfunding campaign to pay the $200,000 in legal costs she owes after a battle with the network. Harrison had an affair with Seven boss Tim Worner and a lengthy legal stoush after the affair ended, which resulted in her being ordered to pay Seven’s costs when she agreed to keep details of the affair and other information confidential. In the crowdfunding page, Harrison says the legal action could bankrupt her.

Exclusive watch. An exclusive on the front page of The Age this morning caught our eye because it didn’t seem, well, exclusive. The story, by Adam Gartrell and Amy Remeikis, was about Julie Bishop’s press conference yesterday concerning the ALP’s “conspiracy” with the Labour Party across the ditch over Barnaby Joyce. And there didn’t seem to be much in there that other journalists at the same press conference might have picked up. 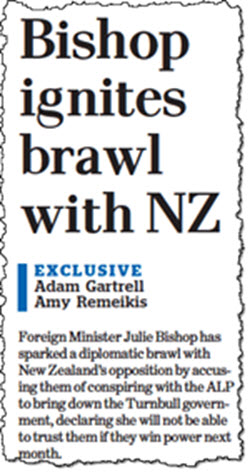 The same story ran in The Sydney Morning Herald, too, but without the “exclusive” tag. 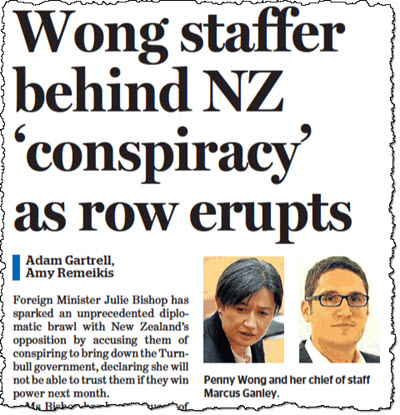 The Age‘s editor Alex Lavelle told Crikey the original story had been filed for online, with the exclusive reveal that it was Senator Penny Wong’s staffer who’d contacted the Labour Party in NZ. That story had been updated for print, and the exclusive tag should have been removed but wasn’t.

Glenn Dyer’s TV ratings. Nine’s night — easily, again thanks to The Block with 1.524 million national viewers and True Story With Hamish and Andy, which collared 1.299 million. Ten moved into third pushing a weak ABC to fourth, but the margin was unconvincing. Seven continues to drift, and no amount of spin can change the fact that the network’s ratings have slumped badly, even though Seven says it has some more “tentpoles” (aka big rating shows) to come later in the year. It is getting late, and there are just three  months in the ratings battle to go, give or take a week.

Hell’s Kitchen on Seven averaged a weak 835,000, while Ten’s Shark Tank had a weak national audience of just 657,000, which is a weak figure for the metro markets. The House on the ABC managed a solid 934,000 second time out and there is something to be said for a top class doco series against commercial TV dross. 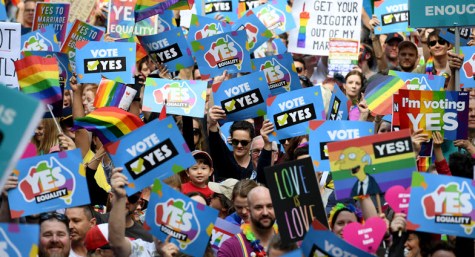 Watching Lyons on his visits to The Dum – I’ve found him little more than just another conservative/Limited News Party apologist (if toned down a little compared to other Limited News Muppets) – just one more “Tar and feather Labor/Greens/the Left : indulge my side” hack.
Digging for examples of “Yes my side has screwed up again – but Labor’s worse” – a subjective, objectivity-free zone.