Foxtel’s poor performance. Red seems to be the colour of choice for Foxtel. It’s the colour of its new logo, but also for the company’s overall performance in the year to June, hit by weak advertising, weak subscriber numbers (again) and the impact of Ten’s collapse into administration. News Corp cut the value of Foxtel by US$227 million at the halfway mark because of the weak outlook, and that was an act of foresight as subscriber numbers remained stuck on 2.8 million (at the end of December they were just above 2.8 million), bolstered by a small rise in the fourth quarter with the launch of the Foxtel Now streaming service (as planned).

Foxtel hopes this service will push subscriber numbers higher, but it never made headway against other streaming services with Presto (which it owned with Seven West Media). Foxtel is planning to launch an IP Box (like its IQbox for the cable service) and it will stream free to air TV channels as well as other services. It sounds a lot like the very successful Telstra TV services which has cannibalised some of Foxtel’s subscriber base (Telstra owns 50% of Foxtel).

Foxtel’s net income fell to US$59 million, compared to US$180 million in the prior year period, primarily due to the $US58 million loss resulting from the change in the fair value of Foxtel’s investment in Ten Network Holdings and US$53 million in losses related to Foxtel management’s decision to drop Presto in January 2017. News said Foxtel’s earnings before interest, tax, depreciation and amortisation fell US$36 million, or 6%, to US$568 million. In local currency, Foxtel EBITDA decreased 9%, primarily due to decreased revenues from lower subscribers and planned increases in programming costs, specifically investments in sports. — Glenn Dyer

Fairfax apologises for wrong photo. Fairfax Media has apologised for publishing a photo of the wrong person in an article yesterday about corruption arrests within Australian Border Force. The online article and a link from the homepage to the article both had a photo of an Ali Jomaa who has the same name as one of the people arrested, but is not him. The Fairfax websites this morning published an apology on their front pages, including a photo of the man incorrectly identified: “Fairfax Media sincerely apologises to the Mr Ali Jomaa who had not been arrested (and who appeared in the photograph) for any hurt and embarrassment caused by the article and the link on the home page.”

The shock and horror of short shorts. Hold onto your cardigans, the Wall Street Journal has an expose on a northern summer fashion trend that, it says, has parents at their wits’ end: short shorts. According to the conservative business newspaper, it’s the “summer of the micro-short”, and “parents’ tolerance for the trend is shrinking along with the length”. No one tell Anne Marie Chaker that short shorts are not actually new. As Vice magazine wrote more than a year ago: “Today, denim cutoffs have all but lost their shock factor — both on the runways and in real life — but that’s a small price to pay for gaining a universally beloved (and socially acceptable) summer wardrobe staple.”

The devolution of the Downer family. One thing that most Australians agree on, left and right, is that the attempt by the Howard government to steal newly-formed nation East Timor’s oil and gas, was one of the most shameful episodes in our history. Foreign minister Alexander Downer played the lead in that, and it’s about all he’ll ever be remembered for. Now here’s someone in The Australian, arguing that the East Timorese don’t really need all that grubby oil; tourism is their future. The author of this manifesto? Georgina Downer, the Downer daughter, fourth generation politico, think tank blowfly, and failed preselection candidate for Goldstein, doing her bit to restore Daddy’s reputation against the oily oiks. In the UK they have Scottish and Welsh parliaments. We have political devolution here too: it’s the Downer family, getting less welcome with each passing era. — Guy Rundle

Fox host sues over sexual harassment report. A Fox News host who has been suspended over allegedly sending lewd pictures via text message to colleagues is suing the HuffPost journalist who broke the story. Eric Bolling is after $50 million for what he says are false allegations, but which reporter Yashar Ali said he had 14 sources for. Ali said in a series of tweets that the lawsuit did not name HuffPost, but that he was “not going to stop reporting on Eric Bolling or anyone else. I’ve had family members killed/jailed in Iran, a lawsuit isn’t going to scare me”. 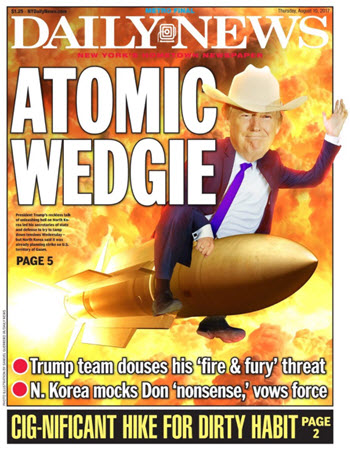 Glenn Dyer’s TV ratings. Nine’s night, thanks to the revamped AFL Footy Show and the absence of any credible competition on the other channels — although The Bachelor grabbed 1.02 million national viewers for Ten and helped fight off an average offering from the ABC.

But I reckon Seven would have been quietly happy with The Front Bar figures — 304,000 nationally and 180,000 in Melbourne. Yes, it was easily beaten by Nine’s offering, especially in Melbourne but on a cost to income basis, Seven would be smiling. TV is no longer bigger, better and brighter (and a case of damn the budget) but all about cost to revenue, reach, social engagement. The Front Bar will hang in there, but will the Melbourne viewers return for more of the same helping of the Eddie McGuire they now know so very well?

The big test is who many of last night’s viewers turn up next week and the week after — and past the end of this year, whether Eddie McGuire returns in 2018. He is no longer the fresh-faced former Ten and print journo with a love of Collingwood who fronted the first program back on March 24, 1994. — Read the rest on the Crikey website

Foxtel out-rated Ten during Games? Yes, but no …

Someone said that only a genius like Alan Bond could go broke selling beer to Australians so let’s hope the mudorc manages to lose many millions selling them sport.

Gorgewhiner Downer’s dubious ditties have been featured in Fairfax publications as well and as an IPA ideologue I’ve no doubt she’ll have a reserved seat at The Drum’s desk as Their ABC strives to become more “Fair and Balanced”. A gig at the Oz seems obvious enough and with Hinch now so comfortably ensconced right here at Crikey perhaps we’ll be the next to receive the benefits of her wonky wisdom. Having to scroll past Hinch is bad enough,but Gorgewhiner would really be a Downer.