Political correctness gone mad, of course, as men have been forbidden from joining the army, reports the Tele. But is it a ban?

The Daily Telegraph spat out a shocking revelation this morning  — that the Australian Army has banned male recruits! To wit:

“The Australian Army has put a ban on male recruits in its politically correct push to increase female ranks, including those on the frontline in combat roles.”

“‘PC brigade’ exclusive”, all caps, sits atop the story like a jaunty but furious little hat. 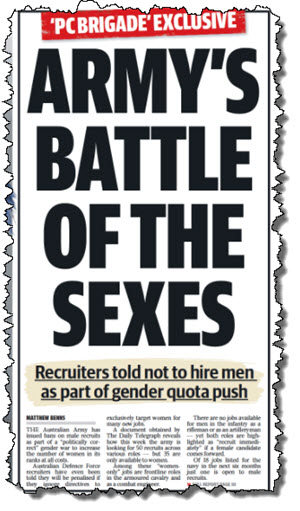 The story, by Matthew Benns, quotes a “distressed army recruitment officer” saying, of course, that it is “political correctness gone mad”. Benns gets similar quotes from Cory Bernardi and Bernard Gaynor, both of the Australian Conservatives. After all, why quote one member of a party whose view on these things could be seen from around a corner when you can quote two?

News Corp stable mates The Australian and Sky News jumped aboard this sturdy ship of outrage and threw the word “ban” about gleefully. The Oz even added more shocking revelations to the Tele scoop — “in its desperate attempt to double the number of women in the Australian Army to 25 per cent, the fitness test for new recruits has been dropped to just four push-ups and 20 sit ups”.

Is Australia really building a women-only army? The story makes the claim that “This week’s target list of Army jobs is looking for recruits in 50 roles — but 35 of those are only available to women”. One can only assume the Tele is hoping readers will be so consumed by political correctness-induced apoplexy that they throw their paper across the room before finishing the story.

At the very bottom of the story, below the distressed recruitment officer, below Bernardi and Gaynor and below some months-old quotes from from Chief of Army Lieutenant General Angus Campbell about the aspiration to have 25% representation of women in the army by 2025, is the response from the army:

“A Defence spokesman said: ‘While Defence maintains targets to encourage greater participation of women, every candidate must meet the required standards. Successful candidates are selected based on merit and their capacity to do the work, not on their gender.’

“He did not answer questions about recruiters being told specifically to target women, but said men or women could apply for any role.”

A Defence spokesperson confirmed to Crikey this morning that men were not excluded from any ADF roles, pointing out “men continue to represent the majority of all ADF applicants at a ratio of 2:1”.

“There are no ADF employment categories which are open exclusively to women,” the spokesperson said said.

And as for the claim the Australian Defence Force dropped entry requirements to make it easier for for women? “The entry standards for ADF recruitment have not been reduced.”

So not so much a ban as a beat-up.

Navy wishes it could turn back time over Myer stunt?

Fixing Defence once and for all