Living within a 20-minute walk of your work, your supermarket, your gym, your doctor, your friends and family, etc, sounds like a very nice idea, but is it feasible?

The recent refresh of Plan Melbourne by the Victoria’s Andrews government confirmed the goal of creating a 20-minute city is a centre piece of the city’s strategic plan. Here’s the idea:

“The 20-minute neighbourhood is all about ‘living locally’ — giving people the ability to meet most of their everyday needs within a 20-minute walk, cycle or local public transport trip of their home.”

The hoped-for benefits are enormous; it seems there’s nothing that can’t be achieved via land-use planning:

“A 20-minute neighbourhood can create a more cohesive and inclusive community with a vibrant local economy — reducing social exclusion, improving health and wellbeing, promoting a sense of place, reducing travel costs and traffic congestion, and reducing carbon emissions across the city as a whole.”

To give credit where it’s due, the refreshed version of Plan Melbourne gets rid of the jejune idea in the original Plan that jobs must be within 20 minutes travel time by active modes:

“Due to the specialised and diverse nature of many people’s work, access to employment will often be outside the 20-minute neighbourhood.”

So, is the 20-minute city a compelling idea that warrants being at the top of the policy priority list? Or will it soon be forgotten like the target set in the previous metropolitan strategic plan published in 2002, Melbourne 2030, to achieve 20% travel by public transport by 2020? According to VISTA, public transport’s share of all weekday trips is currently around 9% and its share of motorised trips is about 11%.

It would be nice to live in a place where you have the option of not having to drive in order to meet your everyday needs (except work!) — and, indeed, there are places where you can (e.g. small country towns). It’s a nice idea, but it’s mostly fluff; it’s more about marketing than serious policy.

Politicians like Prime Minister Malcolm Turnbull love the idea (his version is 30 minutes) because it’s inherently long-term, so it won’t take much from the current budget, won’t inconvenience anyone in the short term, and the current government knows it will be long gone before its ever called to account. Key constituencies like the rhetoric around traditional village values and sustainability objectives.

But nice isn’t the same as plausible. You can have anything you want — even congestion-free, untolled motorways — if you’re prepared to cop the financial, social, environmental and economic cost. Few are though. The problems with this idea for real-world policy are numerous.

The first issue is that the defining access limit for active travel with an ageing population must be weighted toward walking. Even in the Netherlands and Denmark, considerably less than half of trips are made by bicycle. Access and wait times make it hard for public transport to be competitive for short time/distance trips.

At present, 60% of walking trips in Melbourne are less than one kilometre and 88% are less than two kilometres, suggesting a limit of around one kilometre, perhaps even less. The average trip distance in the middle-ring suburbs by all modes, however, is 5.3 km for shopping, 6.5 km for education, and 8.1 km for social and recreational trips. It’s not much shorter in the inner suburbs. 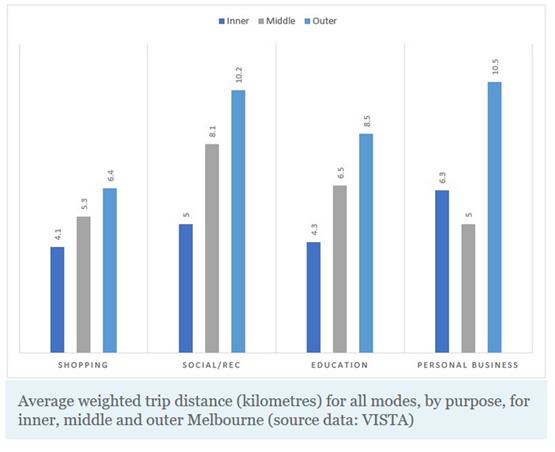 So the scale of change to existing land use patterns, especially the density of activities and population, would have to be enormous to achieve even a semblance of a 20-minute city in the suburbs where over 90% of the metropolitan population lives. The scale and intensity of opposition to higher density developments in Australian cities suggests that’s optimistic. Something close to it will likely be achievable in the inner city and in pockets of high-density redevelopment around centres, but that’s only a small minority of residents.

Another huge problem is many people would still choose to drive to the local supermarket and the local doctor, or take their kids to the local school in the passenger seat. Three quarters of kids already get driven to primary school. Simply having the option of walking won’t, by itself, automatically change residents’ preferences away from driving.

Of course, there’s no reason to think that people would necessarily shop, dine or get haircuts locally just because there are service providers within a 20-minute walk. We’ve got a large local centre, but my household largely chooses to travel elsewhere e.g. we regularly travel 9 km to Preston Market, we like to dine at particular restaurants, patronise specialty bookshops, buy hardware at Bunnings, and our children don’t attend local schools/universities. Most of our friends and family don’t live within 20 minutes by foot, bicycle or transit.

What a dense network of walkable local centres can’t offer is the range of services and, in particular, the high level of specialisation, available at a larger centre. Those who’re constrained, or choose, to meet their everyday needs locally, will on average have less choice and/or face higher prices. Those who have a choice will more often than not drive somewhere else.

And without the journey to work, the “20-minute city” is a much less substantial idea. The commute is what mostly drives peak hour congestion and determines the capacity and cost of infrastructure. It’s the most important trip most people make. Many work trips are incompatible with the 20-minute city as Plan Melbourne now recognises, but that only goes to show the whole idea is a sideshow.

Plan Melbourne doesn’t recognise it, but there are other trips that also don’t fit with the 20-minute limit. For example, trips where specialisation or economies of scale and/or agglomeration are important (e.g. to universities, sporting events, medical specialists, hospitals, museums, festivals, private schools, family and friends). Their absence further reduces the importance of the 20-minute idea. It’s nice to have the option of walking to Woolies or Coles, but it’s hard to justify it as a headline objective in a 30-year metropolitan strategy.

And think about this; even in the centre of Paris — a radius of roughly five kilometres — there are many places that can’t be connected within 20 minutes by transit, bicycle, or walking. For example, use Google Maps to get to Sciences Po university near the geographical centre from elsewhere in Paris intra-muros. That’s in a city with one of the world’s best metros and one of the highest population densities in a developed country. Then try getting to Sciences Po from the Banlieues in 20 minutes.

Reducing travel times and improving mode share are important objectives of policy that warrant real action, not spin. It’s time to stop enabling politicians to get away with merely waving the flag; it’s time to stop signalling and start moving.

2 thoughts on “Will Australians be living in ’20-minute cities’ by the middle of this century?”