Plebiscite problems ... CBA board member's thoughts on governance ... the real problem with lobster with a 'mobster' ...

Going postal. The list of practical concerns about the security of a postal ballot grows so long you would have to buy extra stamps to actually post it (is that still a thing?), but a caller to 3AW this morning has raised the prospect of yet another one: people in private social media groups are already talking about the possibility of stealing ballot papers out of letter boxes. If we need a reminder of all of the issues with a postal plebiscite, this is what Malcolm Turnbull said about it 20 years ago.

Good governance, according to CBA board member. The Commonwealth Bank board directors have already taken a 20% pay cut following the revelations about money laundering through their branches at a huge scale. Following on from years of scandals at the bank, the latest outrage has led to questions about just how well the board is keeping an eye on what is happening on their watch. If board members want advice on good governance, they just need to look around the table — to non-executive director Harrison Young. As well as his role at CBA and as chair at The Conversation, Young is an author of racy novels, with four to his name. He often tweets about his books, the nexus between literature and banking (there is one) and his treatises on good governance. Late last month he tweeted “Your job, my job, our job – the balance between Boards and management in governance”. 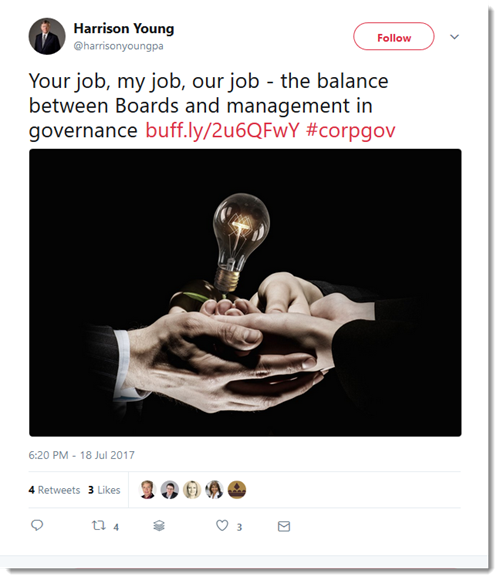 And he also linked to an article titled “Boards need to step up on Cybersecurity”.

Young has been quiet on the Twitter front in recent weeks — we wonder if he will share any more thoughts on governance in the wake of this latest issue.

Betting the house. The ABC’s news series The House, a documentary about Parliament House, launched last night. The House is based on the BBC’s Inside the Commons. Both programs were shot over close to a year with unprecedented access to parts of the buildings of government where the public is rarely, if ever, allowed to go. It’s not the first program that has been adopted by our public broadcaster from the mother country. The Q&A format is based on the BBC’s Question Time, and the now-gone but once popular Spicks and Specks comedy music quiz show was based on the BBC’s Never Mind the Buzzcocks. But it can go both ways. The ABC has sold the format for You Can’t Ask That to broadcasters in Italy, Sweden, the Netherlands, Spain and France. In 2008, Working Dog’s Thank God You’re Here was repackaged for ITV in the UK. And back in the 1970s, the ABC’s Torque was a car review TV program produced just a few years before the first iteration of the BBC’s Top Gear.

What is not quite appreciated is that while the CBA has yet to file its defence, it has, in effect, said it is guilty by penalising CEO Ian Narev and his main executive reports their 2016-17 incentive payments and levied the 20% cut against the bank’s non-executive directors. That is an admission that wrongdoing happened.

Looking at the 2015-16 annual report for guidance, it’s likely the top dozen executives including Narev will have their short-term incentives (STI) cut by more than $10 million. But what remains to be clarified which type of STI is to be cut — is it that for the 2016-17 financial year only, as Catherine Livingstone suggests in her statement? The question comes to mind because there are two types of STI listed — that earned for the current financial year and that deferred. Half the 2015-16 STI was deferred to 2016-17. That is around $10 million or so, so will that be cut as well?

Total pay for the CEO and top executives was $44.8 million, according to the annual report, with $22.4 million aid to them in relation to “the 2016 performance year”. The remaining $22 million was payments deferred from earlier years. That means the “pay cut” could be between 20% and 25%. From 2012 on, the CEO and top executives have received more than $200 million in pay and bonuses. The loss of their short-term incentives for 2016-17 is peanuts.

There is also no mention of clawbacks from former executives and directors, such as the former chair, David Turner, whom Livingston replaced.

The pinch of disappointment. The Melbourne papers are full of more bad news for Victorian Opposition Leader Matthew Guy today, with a recording revealing his lobster feast with alleged Mafia boss Tony Madafferi was followed up with unseemly discussions about political donations. But we think the most shocking revelation from the dinner was that the pair consumed “several bottles of Penfolds Grange”. Red wine with crustacean? What sort of bogan is leading the Liberal Party of Victoria, or allegedly leading the mob for that matter? According to Australian Wine Companion, lobster is best paired with a cool-climate chardonnay, and Penfolds itself pairs Grange with a wagyu steak. Labor’s slogan for 2018? “Lobster: ideally an unwooded chardonnay, a rose at most. Vote Daniel Andrews and Labor.” We predict instant landslide.

Crikey,
isn’t it time you started a ‘titbits’ column or something and returned to publishing actuals tips and rumours?
Or aren’t you getting them anymore?

Hey Bob, I think you need a cold shower

Well I do live in the tropics. But how is that relevant?

“I can see it now :- a postal plebiscite with “angels” stalking posties – liberating votes to “Fill in properly. The way God wants.””?