Phillip Coorey and Samantha Maiden had an epic Twitter squabble about who got the timing of the postal vote plebiscite first.

Good feud guide. Press gallery colleagues Phillip Coorey and Samantha Maiden descended into a public spat on Twitter yesterday. The Australian Financial Review‘s Coorey went so far as to call Sky News’ Maiden a “dimwit” in the brief squabble yesterday, sparked by Maiden suggesting Coorey would know the answer to his question about plebiscite dates if he just watched Sky News. 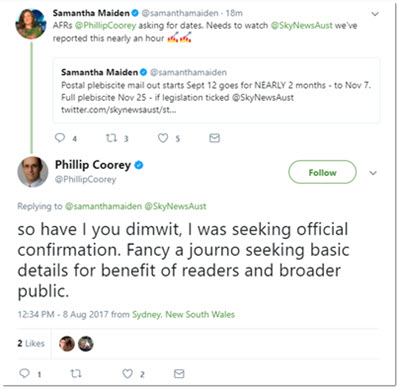 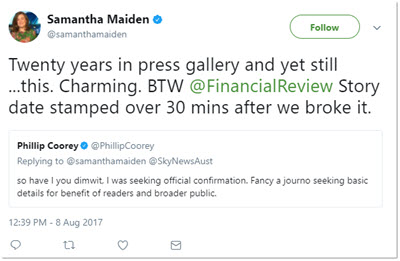 Fox’s ‘fake news’ case could be considered in Sky bid. A lawsuit against Fox News in the US, accusing the media company of colluding with President Donald Trump to disseminate fake news could further delay Rupert Murdoch’s 21st Century Fox bid for Sky in the UK. The court action lodged last week claims Fox fabricated quotes in a story about the murder of Democratic aide Seth Rich. Four senior UK MPs have lobbied the government to ask Ofcom, which is considering the Sky deal, to consider the court case in its decision. In response, Ofcom has said it is “seeking further clarification” on representations that have been taken to the minister. This will cause yet another delay on the A$18 billion mop-up bid for Sky. In its report published on June 20, Ofcom said that while it did have concerns about corporate governance, there were no grounds to block the deal on the basis that the US company would not meet broadcasting standards. But Ofcom did raise concerns that the deal would hand too much power over the UK media to Murdoch. Ofcom now has until August 25 to provide advice on the new submissions, meaning any final decision is unlikely to be taken until after the UK Parliament returns in the first week of September. — Glenn Dyer

AFR hits the wrong button, again. Reading the Rear Window column in today’s Australian Financial Review is enough to make you hungry. In what looks to be a cut-and-paste mistake that wasn’t picked up, the last sentence of an item about some innovative kebab-shop marketing in Kalgoorlie was instead tacked onto the end of an item about a business journalism awards scandal in New Zealand. 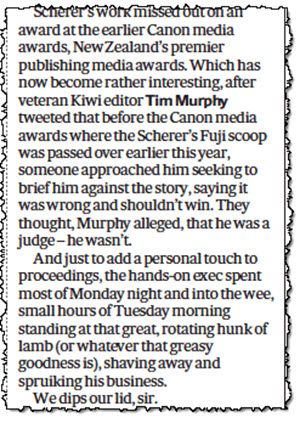 Foxtel TV pirate sentenced. A Sydney man has been given an 18-month suspended sentence for selling unauthorised access to Foxtel. Haidar Majid Salam Al Baghdadi was convicted of charges related to his role in operating a network that allowed more than 8000 people free access to Foxtel broadcasts. Foxtel CEO Peter Tonagh said in a statement the ruling sent a “strong signal”. “Foxtel takes intellectual property theft very seriously as it severely undermines the creative industry including every business and individual that works so hard to deliver us the movies, sport, drama and entertainment we love,” he said. 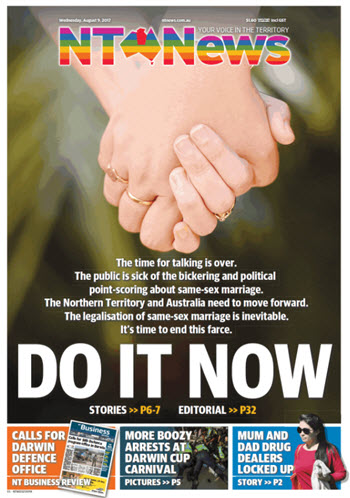 Glenn Dyer’s TV ratings. Nine’s night again, Ten’s problems continue, Seven is trapped with no way out of its hole. The House, Annabel Crabb’s new series on ABC TV, was a solid effort — and while the inspiration is a BBC program, the flavour was distinctly Australian. Last night’s first episode confirmed what I had thought was an urban myth — that Parliament House is unfinished and that there is a huge, concrete-lined cavern — is, in fact, true. The myth was that part of the building was not completed for cost savings reasons in the late ’80s and to ensure it was ready on time to be opened for the bi-centennial in May 1988 by the Queen. The House managed a solid 974,000 national viewers last night. That made it the second most watched program on the ABC last night after the 7pm news (1.111 million nationally) and in front of 7.30 with 925,000 nationally — and should have more with federal Parliament back and the government selling its dodgy same-sex marriage policy. Perhaps viewers are over that and 7.30?

The top non-news program was of course The Block with 1.459 million for Nine with True Stories with Hamish and Andy grabbing 1.335 million as well, and winning the night for the network. Seven’s Hell’s Kitchen at least steadied — its 944,000 showed a little hope for Seven. That was up from 817,000 on Monday night but still under the 1.189 million for Sunday night’s debut. Ten’s second most watched program was the fading Shark Tank at 7.30pm with just 654,000, after the 7pm part of The Block with 738,000. Not impressive at all.