Call in the Feds ... The Age playing with fire ... is Tim Wilson new to marriage equality? ...

CBA’s bad week could be getting worse. This morning, while the Commonwealth Bank was “punishing” its CEO and executives, Sydney fund manager Steve Johnson (he runs Forager Funds) raised another and more serious problem for CBA and all other Australian banks raising money offshore, especially in the US — the damage these money-laundering claims can do to the reputation of the banks and their cost of funds. He warns that banks and investors of all types and sizes that have lent money to CBA and other Australian banks are now potentially at risk for their dealings with a bank that clearly has not had a compliant money-laundering policy or controls:

“Every bank that provides funding to CBA has spent the weekend trying to work out what their own compliance obligations are. Are they at risk of providing funding to an organisation without appropriate terrorism financing controls? The US banks in particular are absolutely ruthless on this issue and, given the fines handed out to HSBC and Barclays in recent years, it is hard to imagine how CBA’s cost of funding stays at its current low levels. Throw in the consequences of a Royal Commission, and the obvious risk of more misconduct issues raising their ugly heads, and a $1bn fine really is the least of CBA’s worries. Reading the weekend’s press, some CBA shareholders are surprisingly sanguine about last week’s shocking revelations. The market capitalisation fell more than $5bn, the theory goes, well in excess of the fine CBA is likely to incur.”

And CommBank could face fines from the US authorities if they find out if any of the laundered money went through an American bank anywhere in the world, and especially through the US financial system. That is how BNP Paribas, HSBC and Barclays were fined more than US$11 billion in connection with laundering claims made by the US government. If the Americans get tough, the CBA case could draw the federal government, RBA and APRA into a nasty situation with the potential to damage the standing of the country’s financial system.

And speaking of getting worse. The Commonwealth Bank of course doesn’t have enough legal issues on its plate at the moment, so step forward shareholders Guy and Kim Abrahams, who today announced they were commencing action in the Federal Court against the bank for “failing to adequately disclose climate change risk in the bank’s 2016 annual report”. The world-first action claims CBA failed “to give a true and fair view of the financial position and performance of CBA in CBA’s Financial Report for the 2016 financial year” and is aimed at forcing CBA to disclose risks in the future. Disclosure, of course, is something of an abiding theme in legal action against CBA at the moment. The bank might retort that its most recent annual report notes that has been benchmarked by “CDP (formerly the Carbon Disclosure Project). In 2016 and for the seventh consecutive year, the Group was included in the CDP ASX 200 Climate Disclosure Leadership Index” although CDP’s disclosure requirements mainly relate to actions by companies themselves in relation to climate change. Let’s see what the bank discloses in the forthcoming 2017 annual report …

Gone but definitely not forgotten. Benalla Ensign editor Libby Price, who is currently fighting a defamation action brought against her and the paper by former Liberal MP Sophie Mirabella, is leaving her post to become a presenter for Ace Radio Broadcasters’ Country Today. Price wrote a piece for the Ensign claiming that Mirabella had shoved independent MP Cathy McGowan — who won the seat of Indy from Mirabella — out of the way of a photo opportunity in April last year. The paper apologised in October, but Mirabella is suing the paper and Price in a defamation case due to be heard in the Victorian Supreme Court in April next year. The matter was in court last week, and lawyers were arguing whether a defence filed by the paper and Price, that the story was actually referring to Ken Wyatt pushing someone out of the way, was admissible, The Australian reported. Price will be starting her new radio role in September.

The Age plays with fire. “Lobster with a ‘mobster'” has to be one of the best headlines in the Australian media this year, but we hope for the sake of the dwindling coffers at Fairfax that it’s been cleared by the lawyers.

Today’s story concerns a dinner attended by Victorian Liberal leader Matthew Guy and Melbourne owner of the La Porchetta chain of restaurants Tony Madafferi. According to Fairfax, Madafferi “has repeatedly been accused by police in court of being a high-ranking member of Melbourne’s Mafia”.

Last year, after a defamation case brought by Madafferi, The Age was forced to apologise and throw themselves at the mercy of the “alleged mobster”: “The Age acknowledges that Mr Madafferi is a hard working family man who has never been charged by the police with any criminal offence, and has no criminal convictions.” It’s also interesting to note that the story is a joint ABC-Fairfax effort — it means that former Age journo Richard Willingham, who landed on his feet as the ABC’s Spring Street correspondent after the most recent round of redundancies, gets a front-page byline even though he is no longer on the payroll.

Is Tim Wilson a recent convert to marriage equality? Readers of The Daily Telegraph yesterday would have been incensed to read that Liberal backbenchers Dean Smith, Tim Wilson, Warren Entsch and Trevor Evans, who are causing all the fuss (and yesterday’s Liberal party room ballot) by advocating for marriage equality, do not even care about the issue enough to have mentioned it in their maiden speeches. Sharri Markson made it very clear not once but twice in her lede that none of these troublemakers thought to include any mention of the issue in their first speeches to Parliament: 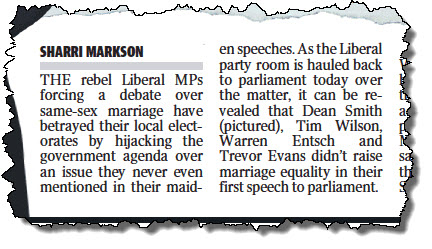 Warren Entsch’s first speech to Parliament was in 1996, and yes, he did not talk about marriage equality back then (he first spoke up against the Howard government’s plans to change the Marriage Act to restrict the institution to a man and a woman in 2004). But Ms Tips could have sworn Goldstein MP Tim “Freedom Boy” Wilson did in fact bring up the topic in his first speech to Parliament last year. Ah yes …

“Most importantly, to my fiance, Ryan: I know you have sacrificed so much for me to be here today, and we are only at the end of the beginning. For seven years a ring has sat on both of our left hands, and they are the answer to a question we still cannot ask. No matter what happens from here, we have already achieved more than many who come and go from this place because we have lived the change we seek in the world.

“And that is why I am here — to lead change, to turn liberal values into liberal action.”

So, Sharri, don’t say he didn’t warn you. 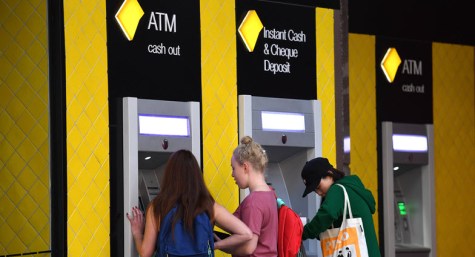 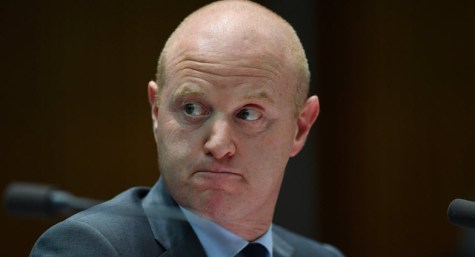 Re the CBA – how much is it going to cost them (and by that I mean customers) for the avalanche of commercials aimed at wiping this latest “bagatelle aberration” from the forefront of our minds?
Oh to be have shares in the company handling their advertising account…

Maybe one of those “CBA financial advisors” could steer me in that direction – even if is a real earner.