The Sun in Britain has ripped off a story from ripper-offer-in-chief, the Daily Mail.

Today in Media Files, the UK’s Sun is to be taken to the press regulator for ripping off a story about Charlie Gard by the Daily Mail, itself best-known for ripping off other publications. Plus (sigh) it is August, so it is time for (sigh) surfing dogs.

The Sun plays the Daily Mail‘s game, will face regulator. The parents of Charlie Gard, who died after a very public court battle to take him from the UK to the US for experimental treatment, will complain to the British press regulator after tabloid The Sun ripped off an interview published in competitor the Daily Mail. Parents Connie Yates and Chris Gard sold their story to the Mail through a “sell my story” website called Featureworld, run by journalist Alison Smith-Squire, who also wrote the Mail‘s story. In a statement on behalf of Yates and Gard, Smith-Squires said they were “shocked and horrified” by the series of stories published as “exclusive” by The Sun, The Sun on Sunday and Sun Online, using quotes from the Mail‘s copy.

“We wish to make it clear these supposed ‘exclusives’ were entirely lifted from one original sweet, tender and sensitive interview the couple did via Featureworld with another newspaper. In addition treasured personal family photos that appeared over two double page spreads in The Sun and Sun On Sunday, on the front page of The Sun and by Sun Online (where they were rabidly shared on Facebook, Twitter and other social media) were used without any consent from either Featureworld nor the family … As a result the public — and especially Sun readers — were misled into believing the Gards were doing multiple stories with multiple press when the truth is they did just one touching and beautiful story for another newspaper.

The Daily Mail‘s website is often criticised for its practice of ripping off and rewriting other publications’ work. Earlier this year, freelancer Ginger Gorman sent the Australian outfit Daily Mail Australia an invoice for work she’d done that had been rewritten and republished. The Mail responded by saying there was “no copyright in an idea”.

Front page(s) of the day. The Advertiser and The Courier-Mail both went for the same-sex marriage plebiscite on their front pages this morning: 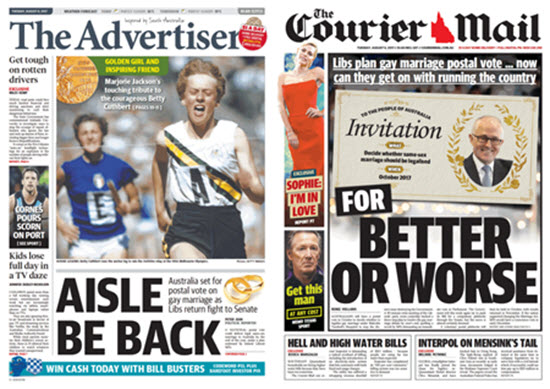 Summer news. BBC presenter Simon McCoy didn’t even try to hide his contempt for this story on Californian surfing dogs. Audibly sighing and explaining that “it is August”, McCoy could not have been less enthusiastic about reading the pun-tastic script: 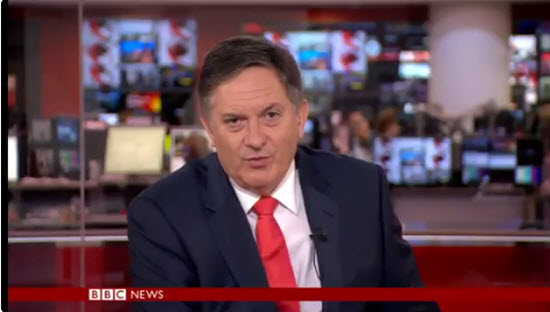 The video has been picked up by news websites around the world, with McCoy retweeting those, as well as memes that have been made about the clip.

Bauer expands online reviews for advertisers. Bauer Media is expanding into online reviews, today launching an expanded review website that goes beyond its current beauty review website, beautyhaven. The German media company said in a statement that TrialTeam.com.au would use an independent panel of testers to review products from the home and garden, food and drink, and pets categories. Advertisers will choose to have their brands tested and reviewed, and then they can use those results in advertising across Bauer’s websites. General manager of beautyhaven and TrialTeam.com.au Michelle Blancato said the beauty reviews had been successful, so it made sense to expand to other categories. “Advertisers are increasingly looking to publishers to tap into our powerful communities to create customers for their brands.”

Israel bans Al Jazeera. Israel has joined a boycott of the Al Jazeera network, ordering broadcasters to block its transmission and revoking press cards for its journalists. Communications Minister Ayoob Kara made the announcement to a press conference on Sunday, which Al Jazeera reporters did not attend. The Qatar-owned network has been caught in the middle of a diplomatic spat between its host country and eight Arab states, which have accused it of supporting terrorism. In a statement, Al Jazeera said the decision was “odd and biased”.

“Al Jazeera stresses that it will watch closely the developments that may result from the Israeli decision, and will take the necessary legal measures towards it. The network also reiterates that it will continue covering news and events in the occupied Palestinian territories in a professional and objective manner in accordance with the common journalistic standards set by the relevant international organisations, such as the British Broadcasting Code of Ofcom.”

Glenn Dyer’s TV ratings. Nine’s night, despite the collapse of the audience for Karl Stefanovic’s This Time Next Year on its second outing with audiences down by a third. So Karl, don’t toss out the alarm clock just yet, because going on last night’s figures, your new gig will stagger towards the end of its season looking rather battered. While it is normal for a new program to experience lower ratings after its debut, the loss of a third of their views is rather dramatic — from 1.87 million nationally to 1.26 million last night. And it had The Block as a lead in which did very well, helping Nine win the night with 1.58 million national viewers and more than a million in the metros. More than 330,000 viewers didn’t stay with Karl after The Block finished, while nearly 300,000 more didn’t even bother tuning in. On debut it was the most watched program in the country, last night it was eighth, which is not terrible, but if there’s another loss of viewers next week, cue the sheep crook and a lead-lined vault.

Seven though took double blows with Hell’s Kitchen losing 20% of its audience to average 950,000 from 1.18 million on Monday night, while Blue Murder shed more than 20% as well from Sunday night’s first episode of 1.09 million to 823,000 (all national) for the second and final episode. Over on Ten, Australian Survivor’s national audience of 839,000 was up on Sunday’s 785,000, but that couldn’t stop Ten was being shunted back to fourth (in total people, and the main channels, behind the ABC) as Four Corners saved the ABC from another weak Monday night (usually its strongest) with a very solid report on waste which grabbed 1.16 million national viewers and a top 10 national slot. This is the real story behind the recent ABC TV series War on Waste. Both complemented each other, and last night’s report by Caro Meldrum-Hanna again exposed the weakness of government and their regulators, with NSW again being a major culprit.