The mining lobby wants a new round of punitive industrial relations reforms, at a time when real wages are falling in the sector and productivity booming. But that's the way neoliberalism operates.

Here is why neoliberalism, whatever economic benefits it may have delivered to households since the 1980s, is inherently unstable and can only ever end in tears: the corporate sector never knows when to stop demanding that the rest of the community be forced to hand over resources to it. The demands for corporate tax cuts will never stop; the demands for punitive industrial relations reform aimed at cutting wages and curbing unions’ already limited power will never stop.

Step forward the most rapacious, parasitic business lobby in the country, the Minerals Council of Australia, which has taken a break from spruiking the virtues of eating coal to issue a new call for industrial relations reform. Its campaign will be fronted by former Labor MP Martin Ferguson, who’ll mumble his way through a list of demands today. The only surprise about Ferguson’s involvement, Labor MPs would note, is that the whole thing wasn’t leaked to The Australian the moment it was agreed.

The MCA wants a return to individual contracts, more curbs on the power of unions to meet with workers, and a dramatic narrowing of the matters that unions can bargain over, further curbing their ability to access authorised industrial action. It would amount to the greatest attack on workers since WorkChoices, particularly in its aim to prevent unions from getting access to workers, which makes it extraordinarily difficult to represent their interests effectively. 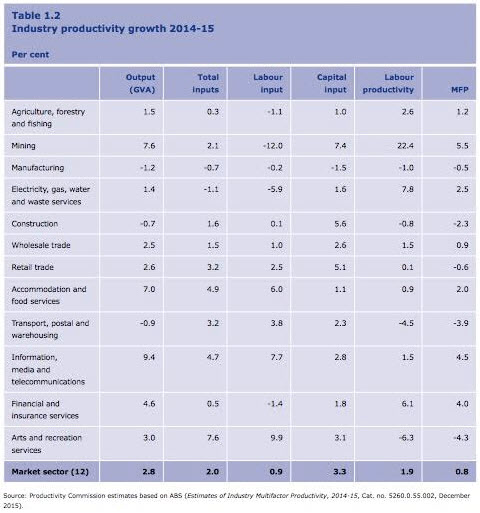 Needless to say, the productivity surge is partly the result of the massive investment in mining undertaken by companies — but it’s a bit odd that Ferguson claims there’s a need to “boost productivity” in the sector.

As for wages growth, yep, it’s definitely out of control in mining — in the four quarters to March, wage price index growth in mining was a total of 0.7%, compared to 1.7% across the whole private sector. The next lowest growth rate was 1.3% in real estate and property services.

In case you think the MCA is unrepresentative of the wider corporate sector, today Woolworths is angry that the Fair Work Commission has blocked retail sector enterprise agreements that make individual workers worse off and complaining about “uncertainty”. It also wants penalty rate cuts imposed immediately, rather than phased in, also because of “uncertainty”.

Wage price index growth in the retail sector over the year to March? Well, that’s also out of control — a whopping 1.8%, compared to CPI of 2.1% for that period. Real wages cuts are apparently insufficient for Woolworths — it wants to cut wages harder.

And it will always want to cut wages, no matter how much damage it does to demand throughout the economy, no matter how much alienation and disaffection toward market economics that it engenders in ordinary households. No amount of wealth transfer from households to the corporate sector will ever be enough.

That was then, this is now: Martin Ferguson’s head-spinning 180 on union power

BK you didn’t mention that the mining sector, with its high productivity growth and low wage growth is making its gargantuan profits by selling our minerals. Even our airports are better regulated in terms of the return they can make off owning someone else’s stuff (in their case, the airports we built and the travel we make). It’s interesting to compare Australia with other provinces and see how they have globally blackmailed governments into giving away countries commonwealth (see https://www.pwc.com/gx/en/energy-utilities-mining/publications/pdf/pwc-gx-miining-taxes-and-royalties.pdf ) – such valiant protectors of competition and free markets!

One of the nice things about a contract workforce is that the workers can be moved on regularly so that it is never clear which employer was responsible for black lung cases.

If God had wanted miners to be benificent and community conscious He wouldn’t have created profits.

Written with real conviction BK. You may assume from other comments that I am a rabid commie bastard, but that would overcook it a bit. There are clearly areas where a little market economics is the best of all worlds, it’s just that it doesn’t apply that broadly, and always has to be reined in.

It is worth noting that the LNG exports will earn us nothing in taxes or royalties for decades, how could that possibly be? Not one jot of coal, iron ore, mineral, petroleum product should be able to be dug up without and up-front payment per tonne/barrel whatever. A royalty, I think it’s called, which should be a minimum of 25% of the market price. If the company can’t dig it out and make a profit, bugger off and leave it to another efficient company to do it somewhere down the track.

Martin Ferguson, what do you say about him a former head of the ACTU. He should be exiled.

Ditto BK and absolutely D’sB. This infuriating rapacity has been going on for so long and like idiots we just swallow it. And bang on about the profit and buggering off.

And then lets talk about real amounts being left in escrow for mine rehabilitation. That’s the start of the discussion.

What! You want to stop them having a legacy company go bankrupt leaving the taxpayer to clean up the mess – if it gets dealt with at all. It must be a violation of a company’s human rights or something. If not then the Human Rights Commission should be rejigged as the Human (corporate entity only) Rights Commission.

But corporations ARE ‘persons’, according to some legal bull$hittery worked behind all our backs some time ago.

Yes, and what are we going to do about it? Let’s get going on a version of a Bill of Rights for the Australian people.

Yeah, let’s have a campaign for mandatory union membership. Fight fire with fire!