Today in Media Files, new research shows kids are watching reality TV and consuming content on more devices, and Adam Harvey has set himself a new challenge as he recovers from being shot in the Philippines.

How kids watch TV. Kids are using more devices to watch children’s programming, but the old-fashioned telly is still where they’re doing most of it. According to new research from the Australian Communications and Media Authority, children up to 14 years old watched 92 minutes of live broadcast TV per day in 2016, compared to 122 minutes in 2005. But on average, a child uses about three different devices to watch kids’ programming. Acting ACMA chair Richard Bean said: “The ACMA research findings confirm what many of us may have suspected, that is, children are watching screen content on television as well as on-demand on a range of devices and platforms.”

The research found that ABC2 was the most-watched channel for children, particularly pre-school children, while older children watched more family-oriented shows on commercial TV. Commercial reality programs were the five most-watched programs by children aged up to 16 in 2016. MasterChef Australia was the most popular, followed by The Voice, I’m a Celebrity … Get Me Out of Here!, The Block, and My Kitchen Rules.

Adam Harvey’s next challenge. It takes more than being shot to keep the ABC’s south-east Asia correspondent Adam Harvey down. Hit in the neck while covering the Islamic State battle in the Philippines last month, Harvey is now planning to trek the Larapinta Trail in central Australia to raise money for pancreatic cancer research — the disease that killed his father, veteran Nine correspondent Peter Harvey, and Adam’s stepfather-in-law Ian Carroll, a former ABC executive. Harvey will do 83km of the track and is raising money for the GI Institute. 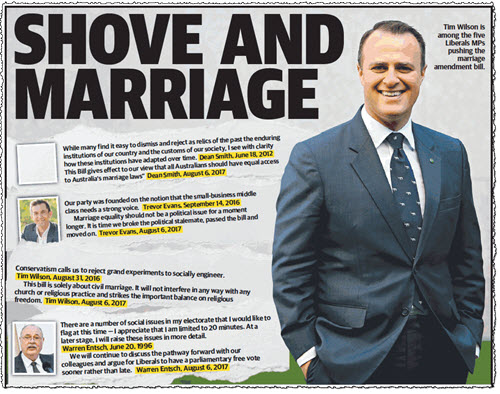 Vanity Fair shuts down Jolie’s correction request. Don’t expect to see Angelina Jolie on the cover of Vanity Fair again for a while. The magazine has refused to correct part of an article about Jolie that was widely picked up in other media, which detailed the story of how an actor for a film was picked from a Cambodian slum school. The VF feature describes a game in which children were asked to snatch money from a table and then come up with a lie about why they stole it. As these things do, it picked up some steam, and Jolie’s lawyers asked VF to remove the paragraph, providing a statement they wanted the magazine to run in its next edition. In response, VF has published the part of the interview transcript and says it stands by the story and will not change the original copy.

Another Fox host stood down on harassment allegations. There are more sexual harassment claims for Fox News to confront, this time involving yet another high-profile host of Fox News, a Trump supporter who allegedly “sexted” several female colleagues. The allegations against Eric Bolling first surfaced in HuffPo on Friday, taking Fox News by surprise. The company took a day to suspend Bolling and bring in lawyers Paul, Weiss, Rifkind, Wharton & Garrison to investigate. The law firm also investigated other sexual harassment claims at the network in the wake of allegations against former Fox News CEO and chairman Roger Ailes, now dead, and high-profile prime-time host Bill O’Reilly.

HuffPost cited 14 anonymous sources who are current and former colleagues of Bolling saying that he sent an unsolicited photo of male genitalia by SMS to at least two colleagues at Fox Business and one at Fox News. Bolling’s lawyer Michael Bower told HuffPo that Bolling couldn’t remember any inappropriate communications and would “vigorously pursue his legal remedies for any false and defamatory accusations that are made”.

Turmoil from sexual harassment scandals have already led to the exits of the network’s two top executives, Ailes (in July last year) and Bill Shine (his former deputy earlier this year), as well as O’Reilly. Last month, Fox Business Network suspended longtime host Charles Payne after an allegation of “professional misconduct” by a female political analyst. At last count there were a reported 20 or more women who had levied sexual harassment charges against senior Fox managers and hosts over the past decade. There are also a growing list of cases where racial discrimination and harassment charges have been made against FNC managers and hosts.

Rupert Murdoch is now the chairman of Fox News and while the senior management has been changed, responsibility for the scandal is now his. For much of this year Murdoch has been in the UK because of the delays to the US$18 billion bid for the rest of Sky that Fox is trying to wrap up. — Glenn Dyer

Glenn Dyer’s TV ratings. If the biopic’s death throes were signalled by the disasters that were The House of Bond on Nine and the Paul Hogan story on Seven, then last night’s reception for Seven’s Blue Murder: Killer Cop should provide convincing evidence of the genre’s demise. Now to shut the corpse in a lead-lined vault somewhere with silver nails, attach a sprig of rosemary and some water from Lourdes and hide it deep, deep in the earth. Viewers may have loved the INXS story, Molly Meldrum and Peter Allen, but that seems to have been the limit of the forbearance. It is a message to Nine as embarks in disinterring Underbelly from a lead-lined vault and trying to attach some ratings Packer Whackers to get a program up.

Australian Survivor (785,000 nationally) remains on life support as it clings to a small audience on Ten. Ten’s main channel was in fact pushed to fourth by an average night on the ABC (and Ten’s main channel averaged 5.7% on Saturday night, close to an all-time low). Are the network’s woes returning now that its in the hands of the corporate undertakers?

Not being particularly up-to-date with who is associated with whom in the in-bred world of media personalities, I was interested to learn that Adam Harvey is married to Geraldine Doogue’s daughter. So, OK, she was married to Ian Carroll who pushed for 24 hour media coverage and was an atheist, whilst she is a committed Catholic. It’s like a version of Peyton Place in the media.

As for Rupie and his corrupt empire, I hope he’s shot down in flames in his bid to take over UK Sky. He’s not interested in sexual harassment scandals, just in controlling and pushing the agendas of the politicians of his choice in the UK, US and Australia.

I’ve never understood why anyone watches either MasterChef or My Kitchen Rules but I am puzzled by under 16s being fans.