So who came out on top in the eyes of the American media? Crikey intern Angus McCubbing reports.

The Australian media is (rightly) in a tizz about the leaked transcript of the phone call between US President Donald Trump and Australian Prime Minister Malcolm Turnbull, where the tensions between the two are laid bare.

The first conversation between the two heads of state since Trump’s election turned sour, with the President actually telling Malcolm he had a more “pleasant” talk with Putin. In the end, Turnbull got his deal, and Trump — ostensibly — got to bully the Aussie PM.

The Washington Post scoop is top of the news in Australia, but how do our friends in the US feel about it? In a news environment where Trump stories change in a matter of minutes, how does it rate? This is what the US press thought of the transcript:

“Produced by White House staff, the documents provide an unfiltered glimpse of Trump’s approach to the diplomatic aspect of his job, subjecting even a close neighbor and long-standing ally to streams of threats and invective as if aimed at U.S. adversaries.”

“But the full accounts of the conversations illustrated Mr Trump’s approach with foreign leaders — flattering his counterpart one moment, badgering him the next, always conscious of how the policies being discussed connected to his campaign promises and how they would affect his domestic political standing.”

“The Turnbull call ends in some bitterness, but it’s notable that Trump basically concedes to Turnbull, admitting the U.S. would follow through on an agreed-upon intake of refugees. (Despite declaring it a ‘dumb deal’ on Twitter following the call, Trump never backed out of it.)”

“Turnbull’s theory seems to be that Trump understands force and will respond to it, and he too seems to have been proven right.”

“Two countries, two leaders, two approaches — yet both succeeded, for different reasons. The calls with Malcolm Turnbull and Enrique Pena Nieto are not only a valuable document of how diplomacy works; they would also set a pattern. Time and again, foreign leaders have found that Trump is hardly the hardened negotiator he claims, but is instead a pushover. If they can get into a one-on-one conversation with Trump, they can usually convince him to come around to their position. If that was true on paying for the wall and taking refugees, it stands to reason it would be true for lesser Trump priorities, too.”

“The transcript of Donald Trump’s discussion with Australian prime minister Malcolm Turnbull obtained by the Washington Post reveals many things, but the most significant may be that Trump in his private negotiations is every bit as mentally limited as he appears to be in public … By the time I was halfway through it, my brain could not stop screaming at Trump for his failure to understand what Turnbull was telling him.”

“It shows Trump misunderstands the refugee issue in Australia and views people who fled their countries as exclusively ‘bad’ — potential terrorists who were detained because they aren’t good people, not because of the country’s laws.”

“… Trump carried out a phone conversation with Australian Prime Minister Malcolm Turnbull, which grew sour when Trump rejected an agreement to take in refugees. The transcript shows Trump growing progressively more agitated, eventually telling his Australian counterpart the call was the most irksome of the day.”

“A day before Attorney General Jeff Sessions is set to discuss a new leak crackdown, the transcripts of two heated January phone calls President Trump held with foreign leaders spilled into the headlines.

“The transcripts feature Trump’s phone calls to the pair of world leaders, created by White House staff. Details of the documents were revealed in the first months of the Trump administration, but this is the first time the full texts of the conversations have been published entirely.

“The president was more frank with Turnbull, raging against a refugee deal made by the Obama administration. ‘This is a stupid deal. This deal will make me look terrible,’ he said, denying Turnbull’s insistence that it would look good for the United States. ‘This shows me to be a dope.’”

“Such documents should have been very closely held, accessible to only a few senior officials. Their publication reflects the intensity of the war inside the White House between rival factions — and a reminder that, for all his well-advertised toughness, the new chief of staff, John Kelly, is going to find it very hard to impose discipline on an institution that is dysfunctional from the top down … The transcripts of his conversations with Enrique Pena Nieto and Malcolm Turnbull show the president to be no more coherent in private than he is public: ill-informed — even about a major attack on US soil — and narcissistic to the point of absurdity.” 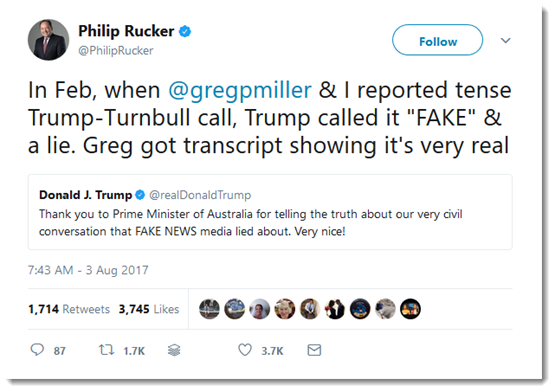 A historical road not taken: the end of an American dream reveals a party lost in a nightmare

“The first conversation between the two heads of state”

— The PM is not head of state. That unfortunately (for now) is the Queen of England.

In the aftermath of the phone call it was clear that the vetting of the refugees was an ‘out’ for the USA. They could vet as thoroughly or as laxly as they liked & still declare the refugees had not passed their criteria.

It was merely an exercise in words, the wretched asylum seekers being viewed as less valuable than pawns.

But we’ve all known that for yonks, haven’t we Zut Alors? Both the ALP and the LNP have behaved atrociously. How they manage to sleep at night is beyond me. There again, if you have no moral compass, it’s probably AOK to delude yourself.

Should read “then again.” The good thing to emerge from all this is it shows up Frump for the ill-informed, narcissist that he is. Always good to know that he’s fully supported by our Rupie and his sons.

And it’s not about them, it’s about the human beings they are trying to trade around in a vicious death spiral game.

The Drumpfster is a lying narcissist and Talcum is pusillanimous poltroon – who knew?

How did the Australian media react to the Trump-Peña Nieto phone-call transcript – further proof of Trump’s state on unmind?

And this is why I really, really hate political media, the yarn is not about two racist rich white men, it’s about the vicious human trade of innocent human beings.