Digital rights organisations and activists were quick to point out their invites to the Melbourne brunch event appeared to have been “misrouted”, writes freelance journalist Asher Wolf.

A curious coalition of NGOs, academics and corporations launched the “Australian Digital Inclusion Alliance” (ADIA) last Thursday morning — but not without some consternation from digital rights groups and activists.

Social service providers, including the Australian Council of Social Services and the Smith Family, as well as academics representing RMIT, Swinburne and QUT were also in attendance at the launch, which was presided over by Angus Taylor, assistant minister to the Prime Minister (cities and digital transformation). Also in attendance was Greens Senator Sarah Hanson-Young.

But digital rights organisations and activists, information security (infosec) researchers and tech journalists were quick to point out their invites to the Melbourne brunch event appeared to have been “misrouted”, with the launch sorely lacking in representation from digital rights and grassroots civil society groups.

The Australian Privacy Foundation was quick to point out it is “hard to treat this #DigitalInclusionAu collaboration seriously when it left digital rights orgs sidelined”.

Also missing from the launch were many of Australia’s infosec and tech reporters: 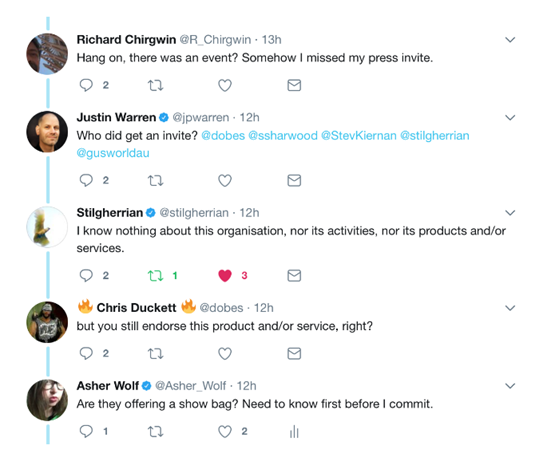 “Digital rights organisations excluded,” tweeted IT consultant Dave Hall in response to ADIA’s launch, pointing out that “#digitalinclusionau is a fine example of how debates can be controlled by vested interests. Define the mainstream & everyone else is extreme”.

IT consultant and tech analyst Justin Warren also questioned if there was “more to #DigitalInclusionAU than shiny branding on year 2 of some Telstra market research by done by Roy Morgan?”

The alliance is founded off Telstra’s “Digital Inclusion Index”, which is based on a report authored by RMIT academics for Telstra. The RMIT report is based on survey data conducted by JP Morgan Research.

What is quietly telling about the new cross-organisational alliance is the language missing from the RMIT report; there’s no references to digital rights, privacy, security, freedom of expression or censorship, platform and infrastructure usability and corporate or government surveillance.

Future Wise told Crikey: “It’s not clear to us who is involved in the alliance but it certainly seems to have excluded civil society organisations working in the area of digital rights. We find this disappointing, you cannot meaningfully discuss digital inclusion without addressing it in the context of both digital rights and privacy.”

Regarding the purpose of the supposedly civil society-focused initiative, it was rather odd to see that the language used by ADIA members on social media during the launch — and in the RMIT report for Telstra — tended to frame internet users as “consumers”. As pointed out by IT consultant Justin Warren, “accessibility” appears to mean “internet access”; “affordability” is focused on how much users spend on internet access; and “digital ability” focuses on users’ ability to use computers for service provision by business and government.

Attendees at ADIA’s launch also referred to internet users as “consumers”, and focused on questions for not-for-profits, government and business.

So what kind of digital inclusion can be expected from a “digital inclusion alliance” launched by a government minister? In recent years, we’ve seen multiple Australian government digital project failures sour trust in data governance, data-matching and data-sharing.

Considering Telstra’s role in Centrelink call-centre mayhem, Google’s recent Deep Mind debacle involving data-mining of e-health data from UK NHS trusts, and Australia Post’s current investment of the development of a biometric digital ID for government service users, the reader might be inclined to think NGOs and social service providers would have jumped to protect their clients’ digital civil rights before flopping into bed with corporations that far too often view “digital inclusion” from the lens of corporate profits. Somehow, more than 100 civil society organisations found no problem that would keep them from forming a bridge with industry.

What benefits ADIA-member NGOs will be getting from their alliance with Telstra, Auspost and Google are yet to be seen.

Will the alliance lead to better digital rights outcomes beyond an ISP and tech industry push for greater internet connectivity for users? Proving ADIA’s commitment to digital rights for Australian internet users will be crucial to ensuring the venture is viewed by the broader community as more than business industry astroturfing of digital civil society.

Let’s cool it with the ‘cyber Pearl Harbor’ stuff

There did seem to be a few good orgs there that would benefit from meeting the security/rights crowd, such as ACOSS and the services to Indigenous Australia. Having these orgs there at the start is great, but missing the other half of the equation is a rather poor organisational fail, if unintended.
On the other hand EFA Oz, MEAA and their ilk have been next to practically useless (the exception being the exceptional and gravely missed Scott Ludlum) really in protecting rights and stuff (heck, MEAA could barely sufficiently protect their own members’ rights) so I’m not entirely sure the involvement of more orgs would help anyway. This is despite that the journos who were cited in this article, and the writer herself, are rather well known for being active in this sphere.
Yup, good ol’ astroturf. Doing something to make mum and dad feel good about their kids ‘safety’ online before flogging the NBN and finalising the Australia Card By Stealth.
rant rant rant