Libs want to talk about their mates ... why Nigel Scullion was in the UK ... Turnbull strangely absent ...

OK, let’s talk about the AHA. PM Malcolm Turnbull had a go at journalists this week for asking him too many pesky questions about marriage equality, while he wanted to have a chinwag about the government’s plan to get up to 10,000 young people into “internships” at pubs and clubs around the country. It’s part of the government’s PaTH (Prepare Trial Hire) program, which pays businesses to take on a young person receiving welfare payments — and the government foots the bill for paying the “intern” $4 an hour during that time. The government had previously announced a partnership with the Australian Retailers’ Association to get young people in retail stores, and this week’s announcement was a partnership with the Australian Hotels Association.

What was Nigel Scullion doing in the UK? In the kerfuffle over the citizenship status of our elected representatives, there are many stories of the lengths MPs have gone to in order to renounce their citizenship of other countries before going to the ballot box. It’s been reported that Indigenous Affairs Minister Nigel Scullion made a whistlestop round trip to the UK in order to renounce his dual British citizenship before he was elected as a senator in 2001, but Ms Tips hears there could be more to the trip than meets the eye. Scullion headed the Australian Fishing Industry Association before he was elected, and the word around the industry is that the last-minute flight was chartered just for Scullion. We’ve asked Scullion’s office exactly when and how he got to the UK and back before the election but didn’t hear back before deadline.

Where’s Malcolm? How many pollies does it take to launch a freeway extension? That’s what the sandgropers were asking yesterday when no fewer than 13 state and federal MPs walked the new bitumen of the Mitchell Freeway extension between Joondalup and Clarkson in Perth’s northern suburbs. It was one of many occasions Prime Minister Malcolm Turnbull attended in his week in the Wild Wild West, which WA Labor Premier Mark McGowan labelled as a “pic op” trip. McGowan loves a photo opportunity as well though, being one of the 13 MPs at yesterday’s freeway opening. Strangely, the photo he chose to upload to social media doesn’t include Turnbull at all. 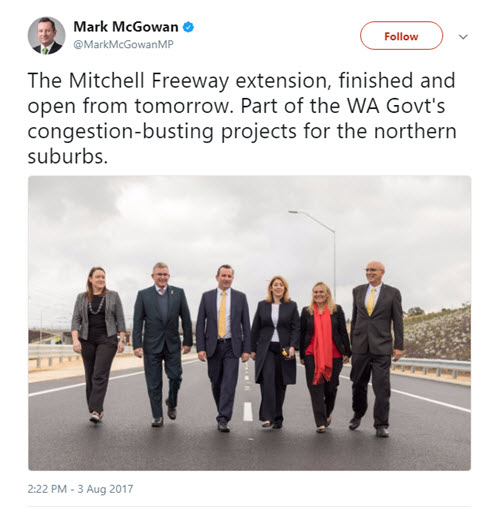 Turnbull retweeted a few of his ministers that were at the event — McGowan was included in those photos. Harsh.

Bah, that freeway extension in Perth is about ten years behind. The suburbs extend about another 10 kms past the end of this extension.

old greybearded one
Reply to  Phen

Perhaps the AHA will train the PaTHetically used to polishing the pokies – surely as the fonts of most pubs’ wealth they deserve embrocations for their one arm?
Just what the unemployed need, a familiarity with those monstrosities.

One way they could get more people a start in retail is to piss off with the mongrel self service checkouts, which I refuse to use. I am a small town teacher and a lot of my ex students get their first job with the local Coles. Coles make enough money out of me that they can pay someone, they don’t give a discount for self packing!!
Internships for bar staff? There are a few skills in pouring a beer, but bloody hell.