Poll Bludger: is Dan Andrews hurting Shorten’s chances of winning the next election?

A great convergence has been under way in the four largest states, eliminating a pattern through the last three elections in which Victoria reigned as Labor's strongest state.

There’s been no shortage of punditry lately concerning the bleak prospects for Malcolm Turnbull’s prime ministership, which have been given another spur this week by suggestions that the Liberal Party’s same-sex marriage crisis could usher it into its terminal phase.

This is increasingly being complemented by favourable commentary about Bill Shorten, such as Laurie Oakes’ assessment on Friday that his rhetoric about inequality demonstrated that “his political smarts should not be underestimated”.

Even The Australian found cause to talk up Shorten’s “strong, polished speech” at Labor’s New South Wales state conference on the weekend, which showed he had “discovered a political narrative that works”.

Needing only to improve on his 2016 performance by a handful of seats to secure the keys to The Lodge, it can hardly be doubted that Shorten has ended the first year of the parliamentary term in an enviable position.

However, there’s no such thing in politics as entirely smooth sailing, and Labor operatives who have been around the block will know to keep their optimism on a short leash.

As impressively consistent as Labor’s 53-47 opinion poll has been over the past six months, it’s not a lot different from what Kim Beazley grew accustomed to in early 2001, and it’s well short of what Tony Abbott enjoyed through the greater part of Julia Gillard’s prime ministership.

Nor is there any sign yet that the press gallery’s growing respect for Shorten has carried through to the public at large, with polls continuing to place his approval rating at the same low ebb as Malcolm Turnbull, who has maintained a consistent lead as preferred prime minister.

Furthermore, a deeper look into the polling numbers suggests Shorten himself is not the only weight in Labor’s saddlebags.

The chart below tracks Labor’s two-party vote in the five mainland states since the last election, using a trend measure of data from Newspoll, Essential Research, Galaxy and Ipsos. 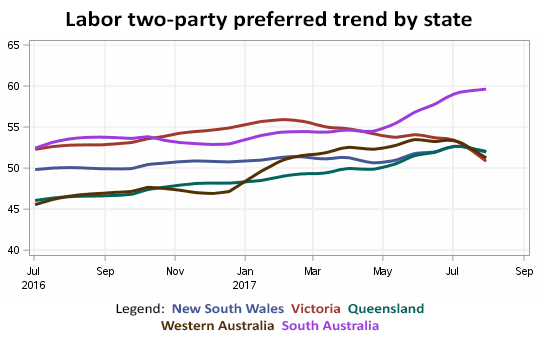 The first thing that stands out is that the Liberals appear to be tanking in South Australia.

This is not a state where elections are generally won and lost, and small sample sizes mean an element of caution is required in interpreting the results — but it’s at least clear that there’s enough going on to give Christopher Pyne something to think about in his seat of Sturt.

The second point is that a great convergence has been under way in the four largest states, eliminating a pattern through the last three elections in which Victoria reigned as Labor’s strongest state, Queensland and Western Australia went heavily the other way, and New South Wales split the middle.

The troubling feature of this from Labor’s perspective is a clear downward trend in Victoria from early this year, bringing it to a point where it has, if anything, gone backwards since last year’s election.

It’s probably no coincidence that Daniel Andrews’ state government has been giving a less than spectacular account of itself through this period.

Even at last year’s election, state Labor was causing headaches for its federal counterpart through its handling of an industrial agreement with the Country Fire Authority, which angered volunteer firefighters who complained that too much power had been granted to the United Firefighters Union.

While this appeared not to harm Labor as badly as anticipated in the areas most directly affected, the party’s performance across the state was, if only in relative terms, well enough below par to cost Bill Shorten the election.

As seats fell like ninepins in other states, Labor in Victoria failed to recover Corangamite, Deakin and La Trobe, which had collectively saved Julia Gillard’s bacon in 2010, and the eastern suburbs seat of Chisholm was lost for the first time since the Keating government’s landslide defeat in 1996.

Since then, the Andrews government has accumulated further baggage in relation to an allowances scandal involving two of its MPs, including former speaker Don Nardella; the Bourke Street car attack and Brighton terror siege, whose perpetrators were respectively out on bail and on parole; and the peak hour shutdown of the Melbourne train network three weeks ago.

So far as polls are concerned, Andrews can count himself lucky on two fronts: that none have been published on his own turf since March, when a privately conducted ReachTEL poll found Labor trailing 54-46, and the fact that federal Labor’s dominant position has discouraged scrutiny of the extent to which his government might be hampering its chances.

But there’s a silver lining in all this for Shorten as well, in that Victoria punches well below its weight at federal elections due to its lack of marginal seats.

As has been the case for at least the past decade, the real target is Queensland, where the poll trend records the swing to Labor steadily mounting to 6% — sufficient to flip nine of the state’s 31 seats, and match the party’s election-winning achievement under local hero Kevin Rudd in 2007.

Is Rupert grooming Casper? While Turnbull swings in the breeze?

You reckon Turnbull’s got a chance of landing Howard’s 2001 ‘Tampa:9/11:Children Overboard’ treble?

“The first thing that stands out is that the Liberals appear to be tanking in South Australia.” About water maybe? If I were a South Aussie I would be very pissed off with the LNP federally and in NSW over the Murray-Darling basin water thefts.

I don’t think the premise of this article is correct. In the midst of a tyrade against the government, a couple of weeks ago, in the Herald Sun, the news was tucked away that the latest poll ( I think from Galaxy) showed ALP leading 51/49 in Vic. It will be fascinating to see what effect the ” dying with dignity ” debate does to the government’s standing

Until we get a legitimate state polling this is, I think, mostly speculation. Victoria is also doing very well economically, which means it is less likely than places like WA, SA, NT or QLD to turn against the government.

I don’t think state issues matter too much when it comes to federal elections. I remember people were talking about Campbell Newman effect in QLD where it was hoped Labor would bounce back federally due to state issues.