CSIRO scientists get their hands dirty. What does the CSIRO have to do with the government’s plan to drug test welfare recipients? A lot, it turns out. InnovationAus reports that although Social Services Minister Christian Porter announced just after the budget that CSIRO’s Data61 unit would be developing the profiling tool to be used to pinpoint locations for testing, no contract has actually been signed with the agency.

According to documents received under a freedom of information request, the CSIRO knew about the government’s drug test plans a month before the budget announcement, but exactly how Data61 would be involved was redacted from the documents. The Department of Social Services asked the CSIRO to develop a “prediction system” that would use data to identify which locations should be targeted for the program, using waste-water data, internal Human Services and Social Services data, and Australian Institute of Health and Welfare data. CSIRO boss Dr Larry Marshall said the agency was keen to be involved in the program at Senate estimates earlier this year. “This is an important issue, organisations all around the world are starting to use data in this way. As the national science agency we feel it’s very important to ensure the science is done to the highest standards.”

The problem is, as reported by Crikey already, the experts who actually collect waste-water information say the data they collect wasn’t designed to find drug users and shouldn’t be used for this purpose.

Rotten to the Cory. While Cory Bernardi has been beavering away trying to grow his Australian Conservatives empire across the right of politics, he hasn’t found a sense of irony. In his newsletter to supporters yesterday he blasted Coalition MPs working towards a parliamentary vote on marriage equality:

“It’s been led by a group of self-interested MPs and Senators who have been supported in their backroom plans by some senior government ministers.

In effect, these ministers have been plotting to undermine their own government and deny the Australian people a say on the matter.”

“Plotting to undermine their own government” sounds a bit rich from a guy who absconded from said government just months into a six-year Senate term that he was supposed to be serving within that government.

Coopers trooper. As has been previously noted, former PM Tony Abbott never lets the facts get in the way of having a go at the government (of which he is part, but anyway). Yesterday, Abbott was touring the Coopers brewery in South Australia and decided it was a good chance for a dig at the government (he doesn’t say if it’s the South Australian or the federal government, which is the great thing about being passive-aggressive), writing “Coopers is an iconic Australian business that needs affordable reliable power”. 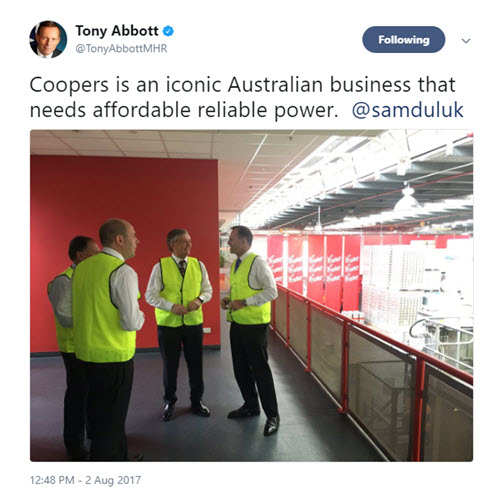 The thing is, Coopers does have affordable reliable power; it has its own power-generation plant.

Raising the (ire of) Shoebridge. 2GB shock-jock Chris Smith prefaced — with a hint of self-congratulation? — his casual advocacy of suspending all Muslim employees of Australian airports that he would “cop a barrage” for it. As it turns out, it didn’t seem to end up attracting as much attention as he had expected/hoped for, especially compared to his guest Prue MacSween’s jokey threat to mow down a young woman in a car several weeks back because she did not like a Facebook post. However, that doesn’t mean everyone is happy to let the matter go. A tipster sent us through a screen capture of NSW Greens MP David Shoebridge’s comments on a Facebook post summarising Smith’s suggestions, in which he says Smith ought to be referred to the Australian Human Rights Commission: 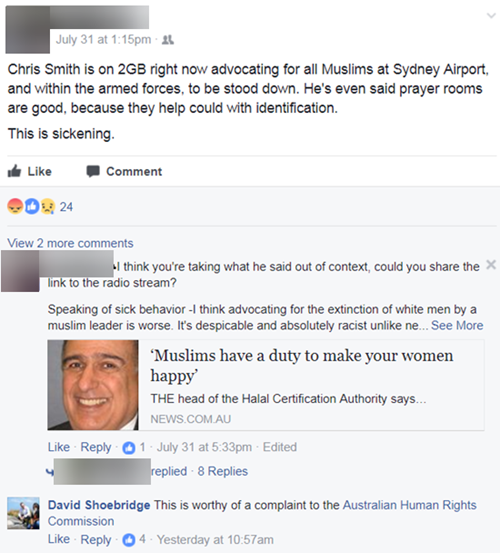 Shoebridge admitted to Crikey that he had not heard the original broadcast or seen a full transcript, and so hadn’t initiated a complaint himself, but he said that the summary he had heard was “hateful and appallingly divisive”.

“It may shock you, but I don’t listen to Chris Smith’s radio show.”

WHY? is Abbott touring a brewery in Sth Australia? WHY? Is it near Warringah? He is a humble backbencher, so why is he galivanting all over the country?

Re the repellent shoutjock Smith’s comments – United Airlines has for 15 years refused to allow its planes to be serviced by the airports usual teams “because it doesn’t want muslims having access”.
So it contracted a separate firm to do the cleaning, provisioning and so on – which is almost entirely Philipine employees but who knows how many from Mindanao?