The Mooch was a very brief, great gift to the media.

Today in Media Files, how the papers responded to Anthony Scaramucci’s dumping, and newspaper subscriptions save lives.

Too Mooch, too soon. Anthony Scaramucci’s whiplash-inducing sacking from his White House post has provided headline writers with some juicy material this week. 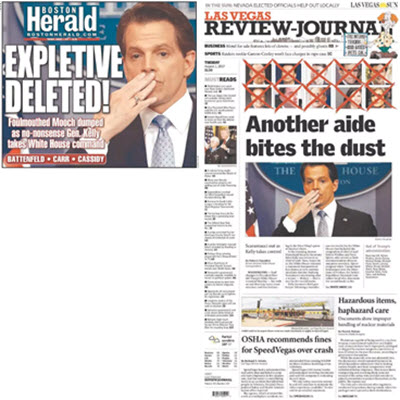 And back home, The Daily Telegraph has had its own go at a splashy headline for the story: 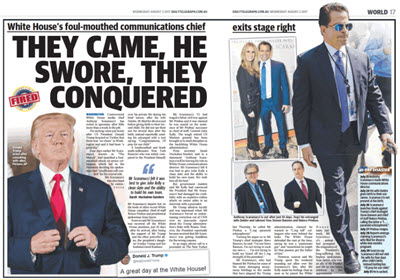 BuzzFeed‘s mates. BuzzFeed and Tourism Australia have teamed up to create a fellowship (they’re calling it a Mateship) that will bring eight “aspiring content creators” (mates) to Australia on a road trip to promote it as a destination, while they also “learn how to create engaging, sharable, travel-focused content in a variety of formats”. The Mateship is open to applicants in the UK, France, Germany and Italy.

Print subscriptions save lives. A Utah newspaper delivery man saved a woman from a house fire when he spotted it while on his route and woke her by pounding on her front door. Matthew Hoagland spotted the fire in the early hours of Tuesday and also called the fire brigade while trying to alert anyone inside the house, the Salt Lake Tribune reports. But once he’d spoken to authorities, Hoagland got straight on his way, finishing up his deliveries for the morning, telling the Deseret News: “I’m on a timeline on that one, to finish the routes. I just had to go. I gave the officer all the information and just gave her the newspaper and I left.”

Fox News sued over Seth Rich story. A lawsuit filed in a New York court against Fox News claims that US President Donald Trump reviewed before publication a (since retracted) Fox News story blaming murdered Democratic Party staffer Seth Rich for the leak of Democratic Party documents to WikiLeaks. In the suit, former detective and occasional Fox News contributor Rod Wheeler also claims his quotes in the story, which said he had discovered “some degree of email exchange between Seth Rich and WikiLeaks”, were fabricated. Wheeler also claims Republican fundraiser Ed Butowsky sent Wheeler a text message on May 14 saying: “Not to add any more pressure but the president just read the article. He wants the article out immediately. It’s now all up to you. But don’t feel the pressure.”

Butowsky is a well-known Trump supporter and financial adviser based in Addison, Texas, who hired Wheeler to investigate the Seth Rich murder. Washington DC police say the murder looks like a botched robbery. For more than a year, his July 2016 death has been the object of conspiracy theories in right-wing media outlets, including Fox News’ Sean Hannity. Some Trump supporters claim that Rich was killed to prevent him from talking about his alleged role in providing WikiLeaks with the trove of Democratic emails that damaged Hillary Clinton’s campaign.

“The accusation that FoxNews.com published Malia Zimmerman’s story to help detract from coverage of the Russia collusion issue is completely erroneous. The retraction of this story is still being investigated internally and we have no evidence that Rod Wheeler was misquoted by Zimmerman. Additionally, FOX News vehemently denies the race discrimination claims in the lawsuit — the dispute between Zimmerman and Rod Wheeler has nothing to do with race.”

Independent will remain independent. The Independent‘s editor has promised staff the publication will remain “truly independent” in its coverage of Middle East issues after a new Saudi Arabian investor bought 30% of the company. The Press Gazette reports that editor Christian Broughton sent staff an email saying there was a formal shareholder agreement in place to ensure independence. “I have been given cast-iron, unequivocal reassurances that we will be able to continue to publish as we see fit about Saudi Arabia and the rest of the Middle East, just as we always have, including throughout the period of the negotiations that have led to this new investment,” he said.

Sultan Mohamed Abuljadayel bought the stake in the digital news website owned by Russian businessman Evgeny Lebedev. Lebedev is the son of former KGB agent turned billionaire businessman Alexander, who sold down his stake from about 60% to 41%. A third investor, Justin Byam Shaw, who is chairman of The Independent, has sold down his stake from just over 30% to 26%. The sale was reportedly part of a push into the Middle East by the group which has plans to open an Urdu and Arabic version of the website. The sale comes nearly 18 months after The Independent shut down its printing presses to exist solely online. — with Glenn Dyer

Nine won the night — end of story. The Block is showing its usual slow burn. Nothing else though is hot. Tonight though, it’s Mad As Hell and Utopia.

What didn’t do well last night was — are you ready to be shocked? — Yummy Mummies from 9.45pm. Just 392,0000 national viewers watched — many of those were probably horrified family members who tuned into Seven in darkened rooms at the backs of houses. Shark Tank on Ten — heading to the bottom with 605,000 viewers. — Read the full TV ratings on our website

That’s bad news about the Saudi buy-in of the Independent for Robert Fisk, the only journalist in the M/E who knows his arse from his elbow and reports accordingly.
Time to retire to the green, green hills Bob.