Who is best mates with John Lloyd? Australia’s Public Service Commissioner John Lloyd is on very good terms with conservative think tanks and lobbyists the Institute of Public Affairs and the HR Nicholls Society, but it’s unclear if the positive feelings are returned. A freedom of information request for communications between the commissioner and the IPA and the HR Nicholls Society shows 32 of pages of emails between Lloyd and unnamed staff at the organisations. Lloyd was appointed to his role by former PM Tony Abbott in 2014 and is a former director of the work reform and productivity unit at the Institute of Public Affairs, along with years of industrial relations experience in the public sector. The emails between Lloyd and the two organisations reveal that Lloyd rejected an invitation to speak at the HR Nicholls Society’s conference in Melbourne due to commitments in Canberra but wrote in his friendly reply:

“I will continue to take an interest in affairs of the society. This will not be affected by Senators questioning me about my membership of HRN.”

The identities of those at the IPA in contact with Lloyd have been redacted, which leads us to wonder who Lloyd was having a joke with in this exchange from May 27, 2016. The Public Service Commissioner was sent comments made about him by CPSU secretary Nadine Flood, with the subject line “more fan mail from you [sic] favourite union”. Lloyd writes to someone at the IPA:

“The CPSU statement below refers to me as ‘an IPA pin-up boy.’ I hope you are not too upset about possibly losing the mantle.”

The reply didn’t engage in Lloyd’s joke (perhaps the correspondent was wary of ending up right here), writing only “Hi John, I’m not kind regards”. 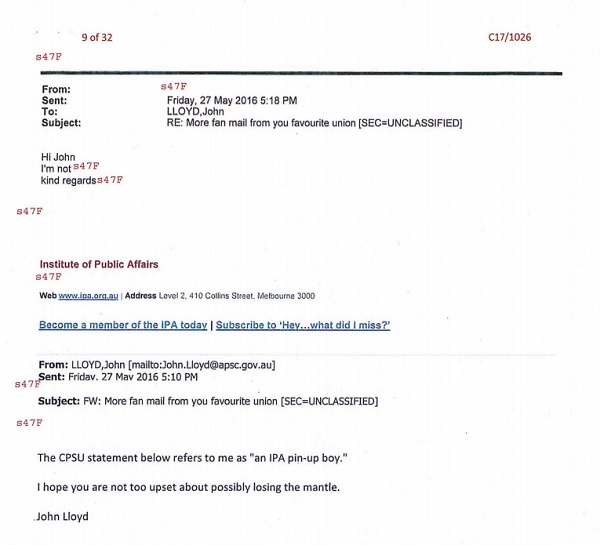 Fahour shows the problem with the revolving door. Anyone else raise an eyebrow at the news that Ahmed Fahour has moved more or less seamlessly from heading Australia Post (by the way, guys, update your website) to BCG Digital Ventures, which has worked with AusPost on digital identity?

It’s no surprise Fahour showed up with Boston Consulting Group’s digital venture capitalist arm given, as the Fin‘s James Eyers noted, he worked at BCG before moving into the banking industry. And given Fahour’s glittering CV, there can be no suggestion he hasn’t got the position of Asia chairman entirely on merit. But AusPost, a government-owned business, has a commercial relationship with BCGDV, in the development of digital identity technology involving blockchain technology (yes, we know, “game changer”, etc), and now the head of AusPost has ended up working there.

It’s no breach of the rules — unlike other countries, in Australia public servants aren’t required to have a cooling-off period as ministers do (although the latter appears more honoured in the breach than the observance these days). And Fahour’s example isn’t even particularly egregious — in the Department of Defence, there’s a virtual revolving door for senior officials and military brass, who’ve been involved in procurement, into the defence firms that tender in procurement exercises. That’s not necessarily surprising — if you’re an expert in military hardware acquisition, you’re going to want to work where your skills expertise will fetch the most money. And ex-public servants are always bound by the same confidentiality requirements as applied when they were in the job. But the revolving door for public servants remains one of the big blind spots in Australian public sector governance.

Coming to his senses. Liberal MP Craig Kelly has taken a moment out of trying to hold off a parliamentary vote on marriage equality to have a go at youth broadcaster Triple J. The broadcaster’s sex and relationships show The Hook Up published a how-to guide for oral sex — and Kelly is not happy about it at all. Triple J is a formidable enemy, though, so we don’t know that he’ll win this round. 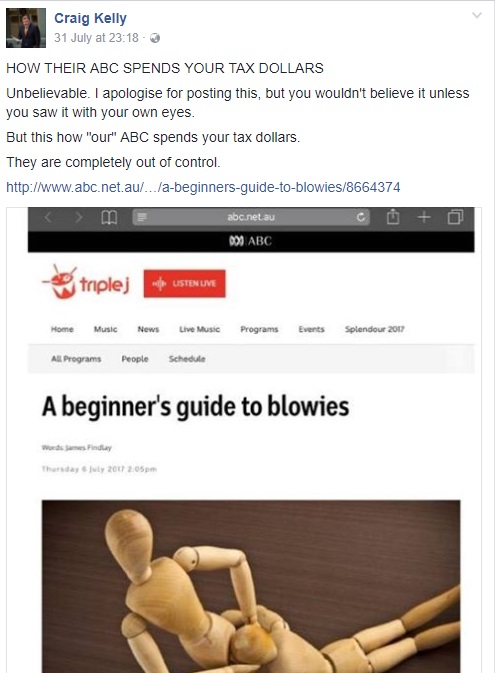 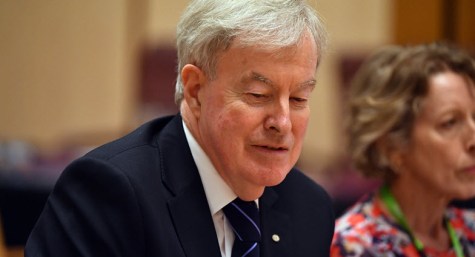 The only public servant the IPA ever liked packs his bags

Poor Craig – still out of the game.