That’s not a snake, this is a snake … everyone votes Green … Stefanovic’s big switch? …

Channel Nine's program director in Darwin casually removes a two-metre python that had slithered into the newsroom.

Today in Media Files, the toughest newsroom in the country shows how to deal with uninvited guests, The Australian reports 100% of voters go for the Greens, and news media ad revenues just keep falling.

Territory tough. It’s hard to imagine anyone in a soft, southern newsroom reacting this calmly to a huge snake in a video-editing suite. A Nine News Darwin cameraman returned to the office with a cuppa yesterday afternoon to discover a two-metre visitor on his desk. But while news director Kate Limon was still working on calling a snake catcher, smartly dressed program manager Alexia and sales executive Myk stepped in to catch and release the snake using a coat hanger and a reusable shopping bag. Limon later tweeted a video of the operation, taking the opportunity to sledge the NT News, which had a front-page photo yesterday of a snake with its head in a VB can with the headline “On the hiss”. 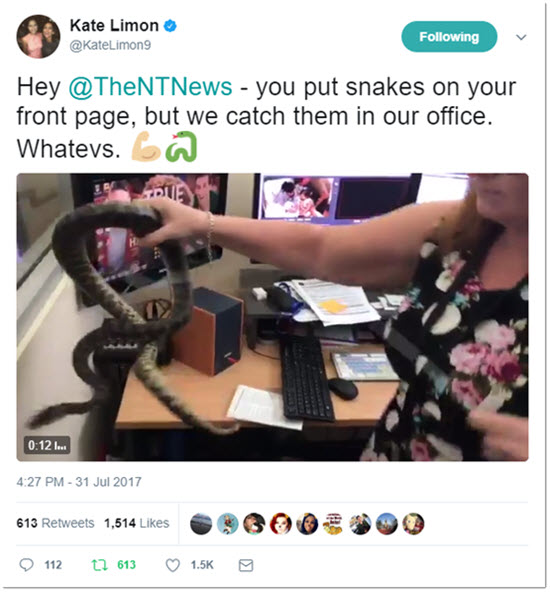 The confused voting of Melbourne Ports. An explanatory bar graph in today’s The Australian poses more questions than it answers. Apparently based on data from the Australian Electoral Committee, the graph is supposed to show how first preference votes have changed in the electorate of Melbourne Ports over the past four elections, but someone has got the placing of the bars around the wrong way: 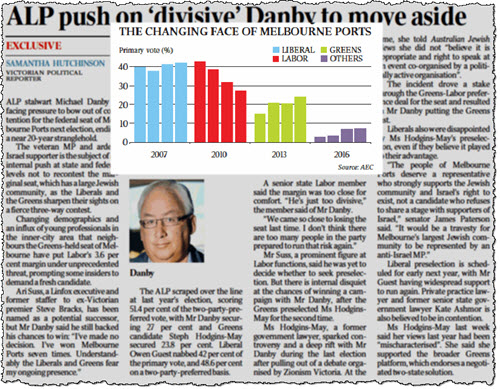 News media revenues fall. News print advertising revenues have dropped by 14.5% in a year, according to data from the industry insights body. NewsMedia Works released its News Media Index figures yesterday, which show total news industry revenue is down 10.9% from the 2016 financial year to 2017, and digital is up 7.5%. The data showed that news media websites received only about 11% of programmatic ad revenue, which NewsMediaWorks CEO Peter Miller said in a statement should change: “News media continues to deliver large, highly engaged audiences who trust their preferred news source. Digital readership continues to grow and in a number of cases print readership has also bucked the trend.”

Isentia cuts content marketing agency. Media monitoring and insights agency Isentia has cut its King Content brand, making an announcement to the ASX this morning. Its offices in New York and Hong Kong will be closed, the value written-down, and jobs have been cut, as the assets will be rolled into the Isentia brand. The announcement also showed revenues would be lower than expected.

Isentia bought King Content in 2015, saying at the time it was a market leader in an area of “growing need”, Mumbrella reported.

Glenn Dyer’s TV ratings. Calling for CVs: anyone who wants to host the Today Show — male, of course —  send your career highlights (make it a SIZZLE REEL) to Nine because Karl might be finally joining prime time after the success of This Time Next Year last night. Yep, Karl Stefanovic could soon get the ticket he has always wanted (remember the horrid The Verdict) out of the dawn and into the evening. This Time Next Year averaged 1.282 million and was the most watched program in the metros, just ahead of The Block with 1.259 million. These, plus a solid performance by the news, gave Nine a solid win in metro markets with daylight second and third, to Seven in fourth.

The ABC should take a long hard look at itself for last night’s Australian Story. I caught up with it on iView, and it wasn’t the most dispassionate pieces of TV about Labor Senator and one-time Chinese donation and expenses recipient Sam Dastyari. It managed 616,000 metro viewers (which again tells us people would sit and watch anything). Ten’s Survivor averaged 656,000 metro viewers — which is barely enough. Have You Been Paying Attention suffered, and its audience dipped to 620,000. — Read the rest at the Crikey website

If one journalist interviews another journo instead of an expert, is that really journalism?