One Nation has the time if you have the money ... the right's constitutional confusion ... unis to react to damning new report ...

One Nation wants you (as long as you’re paying). The issue of money has long haunted One Nation — the ditching of candidates for “not paying fees”, the $250,000 penalty (eventually scrapped) that the party intended to impose on candidates who quit the party after they were elected, and most damning of all, the audio of adviser James Ashby saying charging candidates an inflated price for the production of their electoral material could make the party a great deal of money “if we play it smart”. But it’s not just candidates PHON requires pay their way. A tipster sent through the invite to the party’s 2017 AGM and Queensland state conference on August 24. The event features, we are told “exclusive speeches from all One Nation Federal Senators as well as appearances from Elected State Members”.  The event is very clear that only current financial members can attend, but membership fees don’t exempt you from having to pony up an additional $30 to attend (or $25 if you are a student or pensioner). 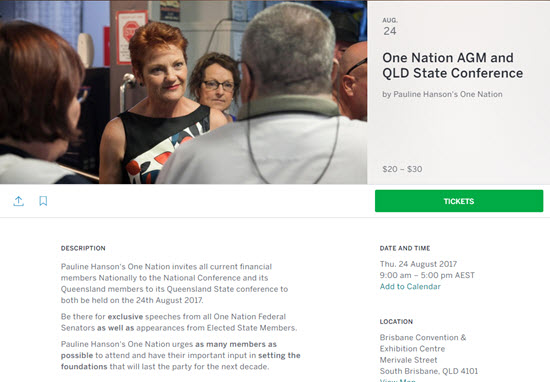 And while the invite promises PHON will become the “the largest and growing force in Australian Politics” (yep … both of those things) in coming years, given the scandals that have dogged the party since last year’s election, and the current question mark hovering over Senator Malcolm Roberts’ citizenship and thus his eligibility to sit in the Senate, do we detect a hint of melancholy in the observation that “it is unlikely that so many inspiring Party members will be in the same place, in person, again”?

Watch this space. At 10am tomorrow, Sex Discrimination Commissioner Kate Jenkins and chair of Universities Australia Professor Margaret Gardner will hold a press conference to release the Australian Human Rights Commission’s report on sexual assault and harassment on all university campuses across the country, after years of campaigning from students and advocates. The data comes from a survey of 39,000 students about their experiences on campuses. In April, the commission was accused of  “unconscionable” conduct, as it originally planned not to release the data.

Not long after, all unis committed to releasing their data at the same time, and the sector is now preparing for the results, and the ensuing backlash to both the number of incidents and how they have been handled by the universities. Advocates have warned that the release of the report will be highly damaging for the industry, and The Australian‘s higher education reporters have signalled that universities are expected to take divergent approaches to their public relations around the issue, with some expected to “own” their statistics and start conversations with their students, while others won’t be so keen to play ball.

The Canberra Times reports Australian National University is already on the front foot, managing the message around the report. The university has hired consultants to review its policies and procedures around sexual assault, and hired extra counsellors to support students and staff. The University of Canberra says it has trained extra staff at the Canberra Rape Crisis Centre. It’s time to watch the universities to see how they react to the news.

Murdoch columnist (finally) sacked. Given the UK conservative media’s loathing of the BBC, the recent revelations of a large gender pay gap among BBC presenters have been a gift that keeps on giving for right-wing commentators happy to both kick the BBC and argue that female presenters shouldn’t be paid as much anyway. But the usual froth-and-bubble took a decidedly unpleasant turn on the weekend when the Murdoch-owned Sunday Times’ Irish edition published, in its print edition and online at the times.co.uk site, an extraordinary piece from columnist Kevin Myers, who not merely argued that women should be paid less because “men usually work harder, get sick less frequently and seldom get pregnant” — that sort of garbage is par for the course among many right-wingers — but went on to aver that two BBC presenters, Claudia Winkleman and Vanessa Feltz, earned more because they were Jews:

“Good for them. Jews are not generally noted for their insistence on selling their talent for the lowest possible price, which is the most useful measure there is of inveterate, lost-with-all-hands stupidity.”

Within hours, a previous column from Myers in 2009 had been found that denied the Holocaust. Soon after, both columns had been taken down and The Times was rushing to apologise. Sunday Times editor Martin Ivens personally apologised to Winkleman and Feltz, offering a “sincere apology, both for the remarks and the error of judgement that led to publication”. The edition’s Ireland editor took responsibility and also apologised. More to the point, Myers was sacked.

As New Statesman pointed out, however, Myers’ views are well known in Ireland and, presumably, to the Irish editors who allowed him in print.

Constitutionally unwilling to be consistent. Opposition Leader Bill Shorten announced a couple of ambitious policies over the weekend, not least of all his promise to hold a vote around making Australia a republic within the first term of a Labor government. This was jumped on by, shall we say, a predictable cohort. Eric Abetz, the world’s oldest 59-year-old, put out a press release to eviscerate Shorten for his “ultra-left wing agenda” and, given his opposition to a plebiscite on marriage equality, “his breath-taking hypocrisy”.

Then, former Queensland premier Campbell Newman — whose own stance on marriage equality was the subject of a campaign ad that can only be described as the craziest thing to come from Bob Katter that particular day, and prompted Newman to reassure voters that he was more concerned about “fair dinkum, normal Queensland families” — took to Twitter to declare: “So @billshortenmp australians need a vote on a republic but not on marriage equality? #dividingaustralia #opportunist #auspol” 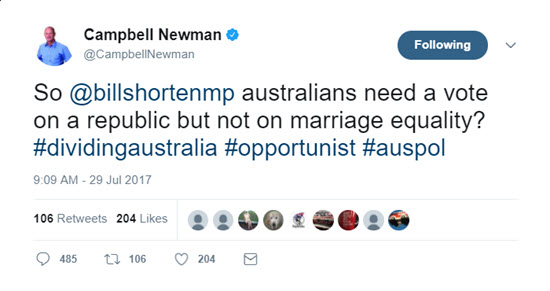 Finally, the perpetually helpful former prime minister Tony Abbott took time out from advising his successor to tweet at Shorten: “Who do you think you’re kidding? Both 4yr terms and republic will reduce accountability” before also connecting the issue to marriage equality — “let the people have their say on SSM!” 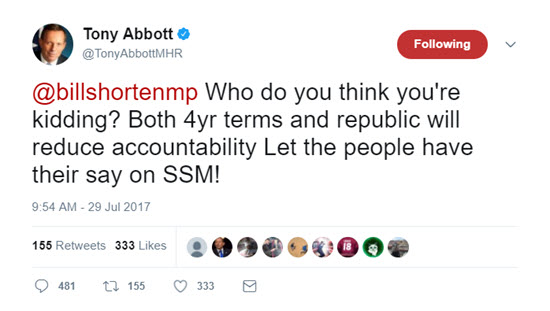 There seems to be some confusion here and, as ever, Ms Tips is very happy to help out Messrs Abetz, Abbott and Newman on why the two issues aren’t the same. A republic would require a change to the constitution, which can only be done via a referendum. The definition of marriage according to the Marriage Act can be changed, like most legislation, without recourse to this process. A handy example would be the change in the Marriage Act in 2004 that brought this whole debate about. In contrast to the long-raging debate about marriage equality, then-prime minister John Howard gave the nation roughly an hour’s notice that marriage would now be a the “voluntarily entered-into union of a man and a woman to exclusion of all others”. Abbott, who told 2GB last Monday he believed the non-binding postal plebiscite was better than “just trying to ram this thing through the Parliament”, was minister for health at the time, and oddly kept his concerns quiet.

The royal opposition. Speaking of Bill Shorten’s republic campaign, do the weekend’s TV ratings hold an unexpected indication of another area of opposition? Seven screened the ITV documentary Diana, our mother last night from 7pm to 8.30pm — smack up against the high profile returns of The Block on Nine and Australian Survivor on Ten — and it left them both behind. The doco had 2 million national viewers (huge for 2017 free to air).  The drawcards were Princes William and especially Harry, talking openly about their mother for the first time since her death. If and when Bill calls his republic vote, those images will be very potent for Aussie monarchists.

Is Australian journalism really a victim of the ‘pro-Israel lobby’?

Shorten’s republic: he already has a couple strong points of difference on which to campaign, tax reform & wages. I don’t think Shorten should complicate things by adding the republic into the mix – this has the potential to divert attention from issues which make voters angry.