RN shake-up … on the hiss … the fucking New York Times …

The ABC has advertised for a managing editor of audio current affairs, which could change the way AM, PM and Breakfast are produced.

Today in Media Files, the ABC has announced a new role that will straddle the radio and news divisions, and the NT News is celebrating the anniversary of what it says is its most famous front page with another doozy.

Another RN shake-up. In what could be a controversial move at the public broadcaster, the ABC has advertised for a managing editor of audio current affairs — a new role that will lead radio current affairs teams (which sit in the news division and include high-profile programs AM and PM), and some of Radio National’s flagship programs, including RN Breakfast hosted by Fran Kelly, Correspondent’s Report and Background Briefing.

The role reports jointly to the head of spoken in the radio division and the head of investigative and in-depth journalism in the news division.

“Harnessing the resources, skills and expertise of our audio current affairs programs, the managing editor will lead the program teams to reach the widest possible audience now and into the future across multiple platforms and devices,” the job advertisement reads.

Radio National staff passed a vote of no confidence in management in November last year after changes were announced, which included the axing of all music programs and the Sunday Nights religious program.

Last week, the ABC announced it would merge its radio and news divisions in the Canberra office but said it had no plans to do the same elsewhere.

Marius Benson retires. The ABC NewsRadio political editor has retired after 42 years as a journalist, delivering his final weekly political wrap on Friday. Benson worked in print, wire services, TV, radio and online throughout his career, starting out at The Daily Telegraph, reporting on the Dismissal of the Whitlam Government, and also worked in South Africa covering the transition from apartheid to democracy.

Front page of the day. It’s a vintage NT News front page this morning: animal, booze and a good dose of wordplay. 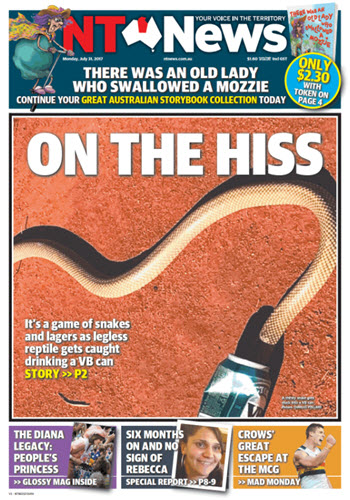 Lyons’ Cater problems don’t make The Australian. Well, fancy that. In his memoirs of his six years as The Australian‘s Middle East correspondent based in Jerusalem associate editor John Lyons wrote extensively about how he and other correspondents in the region were monitored and harassed by Jewish lobby groups in Australia. According to a report in Guardian Australia, Lyons seems to have had as much trouble closer to home — at The Australian and specifically with Nick Cater, then-editor of The Weekend Australian (now director of the right-wing Menzies Research Centre).

“Lyons says pressure also came from inside his own paper. He says the former editor of The Weekend Australian Nick Cater refused to publish his work and the pro-Israel lobby bombarded editors with criticism of his reports. ‘I phoned Cater and he confirmed that he’d asked for my work to no longer appear in Inquirer [The Australian‘s Saturday opinion section],’ Lyons writes. ‘I let [editor-in-chief Chris] Mitchell know that, from my point of view, the exclusion from Inquirer was just the latest in a long series of disagreements with Nick Cater … he intervened and told Cater that excluding me from Inquirer was not acceptable.'”

That sounds very much like censorship of free speech of the sort that Cater has complained about at length in the past couple of years (google “Nick Cater and censorship” you get numerous hits, many in The Australian as the director of the Menzies Institute, such as this example).

So according to Lyons, Cater has a a graduated view of free speech when it comes to Israel? Imagine our surprise that in a story by Lyons in the media section of The Australian this morning headlined “Objectivity doesn’t come easy when filing from Israel“, there was no mention of the problems Lyons had with Cater.

But he did write that Australian editor Chris Mitchell said he had refused to take calls from the head of the pro-Israel lobby group AIJAC, Colin Rubenstein, describing him as a “bully”, after Rubenstein called The Australian reporter Elisabeth Wynhausen “a self-loathing Jew”. Since Mitchell’s retirement, the current management of The Australian last used a commentary from Rubenstein on July 3, when he claimed that the ABC was breaking its charter by using Al Jazeera. — Glenn Dyer

Where were her spidey senses? A Fox News TV reporter continued to report during a live cross as a spider crawled down her bare arm. Shannon Murray, who works for local station Fox 4 Dallas, later said she felt something, but didn’t realise it was a spider until a viewer pointed it out on Facebook. 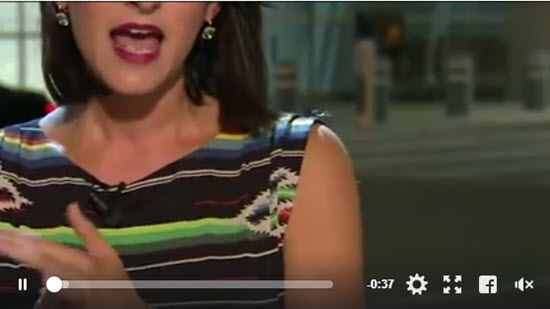 The Grey Lady defends swearwords. The New York Times‘s deputy managing editor, Clifford Levy, has defended the paper’s rare use of the word “fucking”, which appeared in a story about White House communications director Anthony Scaramucci. Scaramucci went on a foul-mouthed tirade against his White House colleagues in a phone call to The New Yorker‘s Ryan Lizza, who wrote about the conversation last week. In reporting the story, the Times used “fucking” in full, and Levy explained the decision in a series of tweets, saying it was discussed by top editors before deciding that it was newsworthy, and “we didn’t want our readers to have to search elsewhere to find out what Scaramucci said”.

Glenn Dyer’s TV ratings. Up at the Willoughby, the Sydney HQ of the Nine Network they were confident that The Block would return last night bigger and stronger and rate its socks off. The confidence about the return of this ratings giant for its 13th season was firm, unlike the hesitancy about how Australian Ninja Warriors would go (it flattened the opposition). Unfortunately for Nine and Ten the royalist streak in Australians — especially female viewers — emerged thanks to the appearance of Princes William and especially Harry in the ITV special on Princess Diana that was the Sunday Night program on Seven last night.

The ITV doco had 2 million national viewers making it the second most watched program after Seven News and the most watched after 7pm — it had 1.334 million in the metros (No. 1 on the night) and 666,000 in the regionals (second most watched after Seven News). The Block managed a solid 1.616 million nationally — 1.117 million in the metros and 499,000 in the regions. Australian Survivor was watched by 639,000 metros viewers, 190,000 in the regions for a weak 839,000 nationally. One thing to remember is that The Block starts slowly as viewers dip in and out as the story is established and audiences build as the backbiting develops.

And why did Seven code (for the ratings) a doco as Sunday Night with an intro from Mel Doyle done in London on a recent trip? Easy. It boosts Sunday Night’s audience figures for the year in the battle with 60 Minutes on Nine. High ratings means more money in ad revenues.

The result was Seven easily won the night as the special flattened the return of The Block and squashed Australian Survivor — which if it doesn’t improve soon will be lucky to be seen next year. A million national viewers first up would have been more impressive. Nine quite rightly pointed out that The Block won the demos, which it did, but the Diana doco won the night because of its appeal to female and older viewers. So much for the triumphal march of the returning series of The Block. It will do this time round — it is more than a match for the confected stuff that is now Australian Survivor on Ten.  — Read the rest on the Crikey website

If anyone seriously doubts the power of the Israeli lobby in our media they need only recall the regular puff pieces that the SMH would run of yet another stalwart young Australian off to fulfill his military duties in the IDF.
No hint of conflict or moral compass.
As for Labor, the Member for Haifa Ports must be chewing the carpet over the NSW branch recognising Palestine.
Gotta lurve the same verbiage used in both the US & here of “self loathing Jews” to describe the mildest of criticisms of Israel.
Almost as if it’s co-ordinated!