The Press Council has found that an article about a murdered woman breached its standards as the article was inaccurate and caused substantial distress without it being in the public interest.

Today in Media Files, a graphic description of a murdered woman’s remains has been found in breach of Press Council standards, and more cuts at Bauer magazines.

Graphic description of murder victim breaches standards. A report that relied on an inaccurate witness’ description of a murdered woman’s decomposing body breached the Australian Press Council’s standards, it has ruled. The story was published on the Northern Star‘s website as syndicated copy from another news website on August 18, 2016, under the headline, “The mysterious and ‘horrible’ death of Sabrina Bremer”. In an update that was later deleted, the article said it was “understood the woman was tied up to the tree when set alight and, as she decomposed and the rope broke, her body rolled down the roadside embankment”. The story also included the woman’s name and details. The woman’s family complained to the council, saying the article had caused serious distress, and that the police had said the report was incorrect. The council found that the article breached its standards as it was inaccurate and caused substantial distress without being in the public interest. When the article was initially updated, this only occurred on the original site and not the Northern Star‘s, which also breached a standard that requires inaccuracies to be remedied. The Northern Star said the inaccuracy was removed and the reporter counselled.

Bauer cuts again. German-owned magazine group Bauer has made more of its Australian editorial staff redundant. Good Health will now be produced in New Zealand by the editorial team on magazine’s sister title, Good Health Choices. A spokesman for Bauer told Crikey there were “significant editorial synergies” between the two magazines, with both markets having the same interests in the health and wellbeing category. Good Health will still be the lead title, and all other publishing functions will continue from Australia. Guardian Australia reports that eight staff will be made redundant — Bauer says it will try to redeploy them within the business.

Paul Dykzeul took over as CEO of Bauer in Australia and New Zealand when the Australian boss Nick Chan was given the boot last month. Earlier this month, flagship title The Australian Women’s Weekly replaced editor Kim Doherty with Nicole Byers.

Legendary book critic to leave The New York Times. The New York Times retrenchment list grows, with the highest-profile leaver revealed by Vanity Fair as the most influential book reviewer in the world — Michiko Kakutani. The paper’s chief reviewer and a Pulitzer prize winner, she has been at The Times since 1979 and a reviewer since 1983. Reporters and editors are in the latest group of departures at the Times with the final number still being worked out. About 40 to 50 journalists and editors were reported earlier this week as having accepted contract buyout offers from the paper. The round of retrenchments is all about the paper’s decision to eliminate its copy-editing desk and restructure the production process. About 60 of 109 editors will be staying and located within various newsdesks in the newsroom. The paper says it will hire about 100 new journalists.

Vanity Fair said Kakutani’s decision to take a voluntary buyout followed the restructuring of the paper’s book reviews a year ago. She told the magazine she wanted to write more about American culture and politics in the America of Donald Trump. Kakutani helped bring a lot of writers to prominence with her reviews (good or bad). These include Jonathan Franzen, Ian McEwan, Martin Amis, Zadie Smith and David Foster Wallace. — Glenn Dyer

AP takes the high road on accuracy. Wire service Associated Press takes accuracy very seriously, correcting a tweet yesterday about a baby giraffe that was posted with a picture of the wrong baby giraffe. 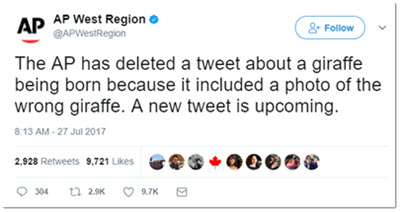 For the record, the correct image of a baby giraffe was tweeted shortly afterwards. 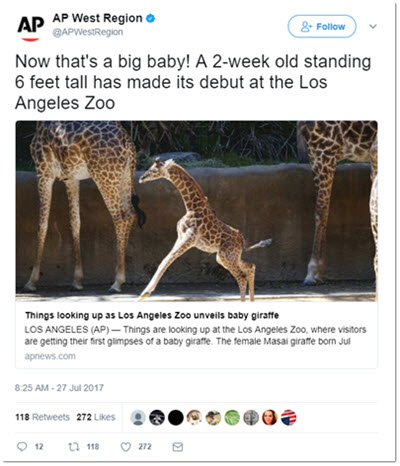 Has the ‘Trump bump’ saved The New York Times? The jury is still out on the future of legacy print media — it is dying in plenty of American cities and towns, across Canada, in parts of the UK and Australia and New Zealand. But the President and his Twitter rants and abuse of what he calls “fake news” media have made it more likely the The New York Times will survive. Hundreds of thousands of new subscribers from late 2016 and earlier this year have been retained, digital ad revenues are now rising faster than before and the paper’s finances are the strongest they have been for years.

After the release of the second-quarter results overnight, New York Times Company shares hit an eight-year high, underlining how good Donald Trump is for the legacy news business, or at least for The New York Times. Other US newspaper companies (such as McClatchy) are not seeing a similar boost.

The Times Co’s June quarter result was notable for what happened in the company’s revenue line. The paper’s digital-only subscription income of US$83 million (including crossword subscribers) jumped 13.9% from the previous quarter and 46% from the same period of 2016, and top print ad revenues of $77 million (which were down 10.5%).

The paper said a total of 93,000 net digital only subscribers were added in the quarter, taking the total number to more than 2.3 million. Crossword subscribers were up 44% from a year ago to 306,000, while digital subscriptions to the paper hit 2.027 million, up more than 42% from 1.216 million a year ago.

Total revenue rose 9.2% to US$407.1 million from US$372.6 million. Subscription revenues increased 13.9%, while advertising revenues rose 0.8% and other revenues increased 12.8%. Print subscriptions continued to slide — down 3.8% daily year-to-year and less than 1% on Sunday from a year ago. The company didn’t give its circulation figures, but said circulation was steady on the first quarter, when there was a rise to go with the surge in digital subscriptions.

The Times is near the end of the current round of job cuts and restructuring of its newsroom. It took a US$19 million charge to cover the cost of retrenchments in the June quarter. — Glenn Dyer

Front page of the day. We wonder how long The Daily Telegraph has been waiting to use this play on the NSW premier’s name? 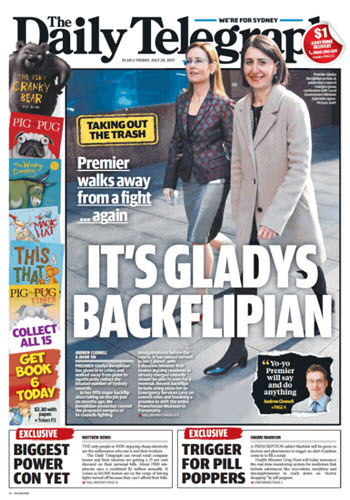 Glenn Dyer’s TV ratings. Thursday night is, along with Saturday, a viewing black hole. Nine sort of won, Seven sort of did OK, Ten was OK. The Bachelor foundered on screen and in the ratings, dipping under a million national viewers. The debut episode on Wednesday night was watched by 1.10 million viewers, last night 979,000, a fall of 11%. If The Bach can’t crack a million national viewers next week then it will be a tough late winter for the rose abuser.

The ABC was almost invisible — Pulse (684,000 national viewers, down from 736,000 for the first episode a week ago, get the defibrillators ready). Nine had an NRL game — Penrith bored Canterbury out of the game (and the finals) while 585,000 watched on Nine and 190,000 on Fox Sports. And in Melbourne with the AFL Footy Show in a rebirthing phase, Seven’s cheap as chips The Front Bar managed 411,000 national viewers including 220,000 in Melbourne. Hmmm. Ten had the flop with Commonsense last night — 469,000 national viewers. Bury that one, or, better still, have the guts to put it on the next series of Gogglebox Australia. Another flop in a flop of a year for Ten.

“Graphic description of murder victim breaches standards” – then there was that fairground ride collapse in Ohio the other day – that was so ‘horrible(?)’ …. how many times did the ABC (and others?) repeat that footage during bulletins?