The briefing Immigration Minister Peter Dutton received on the Good Friday shooting on Manus Island partially backs his claim on the cause of the tension.

Documents obtained by Crikey appear to support Immigration Minister Peter Dutton’s claim that he was told by Immigration Department officials that a shooting incident on Manus Island on Good Friday this year might have had something to do with a boy being brought into the immigration detention centre.

The heavily censored briefing documents put together by the Strategic Border Command Centre for the Department of Immigration and Border Protection were released to Crikey today following a freedom of information request in April on the Good Friday incident.

Dutton claimed in April that asylum seekers had taken a child into the detention centre, which was one of the factors that caused Papua New Guinea navy personnel to fire shots into the centre. This was disputed by PNG Police, which indicated the incident was triggered by a soccer match on the naval base shortly before the incident. Dutton said on Insiders in April:

“I was asked why the mood had elevated on the ground on Manus Island. These two incidents fed directly into that. That is indisputable. So if you’re asking me about why there was an elevation of the angst between those that are living, including on the naval base on Manus, this was part of it. And that was the clear advice to me.”

Crikey can reveal that it appears that, in part at least, Dutton’s claims are correct. According to a briefing sent on Saturday, April 15, officials from the department suggest that, in addition to the soccer event, there was “possible frustration of events [redacted] unauthorised access with [redacted] boy taken into the compound”. 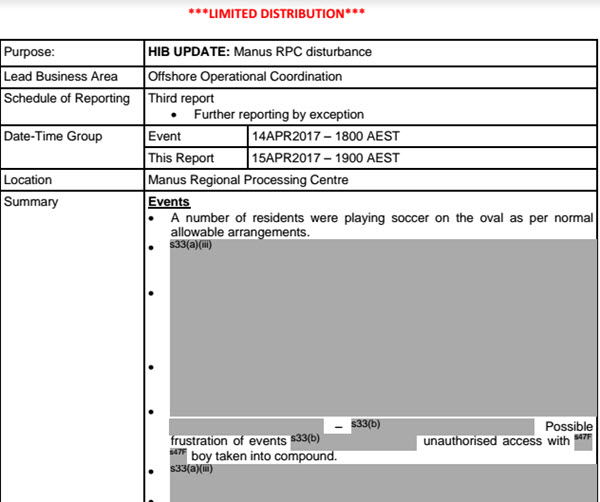 The briefing doesn’t disclose the age of the boy — which was a matter of dispute, with some reports that he was five years old, while PNG Police said he was 10 years old. At last reporting, there was also no complaint from the child’s family until days after Dutton had made the claim. Police on the ground said the boy had merely been given fruit when in the centre. Much of the document was redacted on the grounds that it would impact Australia’s relationship with PNG considering the matter had been investigated by the PNG Defence Force and police. The other component — an allegation by Dutton that locals were angered by an alleged sexual assault — was missing from the parts of the document released.

Dutton has faced criticism from all sides for sticking by his claim. Insiders host Barrie Cassidy reported in early May that a source in Australian Border Force said the incident was solely related to the soccer match, and questioned why Dutton would insist the incident with the boy would have had an impact, but the initial report Dutton received clearly mentions the incident and “possible frustration” as part of the events leading up to the Good Friday shooting.

The briefing also shows that the day after the shooting, detainees in Manus Island were frustrated by missing the evening meal service, and went into the kitchen area to get their own food, but the report states that there was no damage to the kitchens as a result — something the report said had happened in the past when asylum seekers are frustrated about missing meals.

The redacted briefings released under FOI law can be found here.

Anything’s “possible”.
It’s possible they’re still using those fire-walls Howard had installed to keep himself, Reith, Downer, Ruddock et al from the truth – so that they could keep broadcasting, top-dressing the electorate in their “Children Overboard” organic bovine fertiliser?
As it’s also possible “much of the document was redacted on the grounds that it would impact Australia’s knowledge of what really happened” : contrasting with Dutton’s version?

Oh, thanks for the laugh.
That offers no support at all to Dutton. Redaction and decontextualisation. Clearly the bulk of the redaction following the initial sentence discusses the real stimulus for the event. Why else would it be blanked out?
It’s taken Dutton three months to come up with that? Something that does not support his charge in any way. If he wants to support his claim that he had ‘clear advice’, then he can’t release scraps that only obscure that advice.
He is truly pathetic, not that isn’t general knowledge already.

“Possible frustration of events……………………………………………unauthorised access with…”
What chance the words missing in the middle of that sentence make absolutely clear there was nothing untoward about the boy’s access to the facility e.g. “due to false rumours about”?
Very convenient that those few words (whatever they are) needed to be redacted. Where’s a whistle-blower when you need one?

Perhaps it’s the cynical old journo inside me, but I don’t know how Crikey can be sure that the censored portions don’t put the uncensored portions in an entirely different light, possibly contradicting them. The ommission of a single syllable–‘not’, for example–can reverse meaning. As for the omission of sentences …