One Nation senator Malcolm Roberts admits he wasn't given the clear on his citizenship status until six months after the election, writes Josh Taylor and Max Chalmers.

It is likely that One Nation Senator Malcolm Roberts was still a dual citizen when he was elected to Parliament last year, the embattled senator has revealed. He went on Sky News’ Paul Murray Live last night to try to end the confusion (he has created) over his citizenship. He showed the documents showing he had renounced his British dual citizenship to host Paul Murray but did not release them to anyone else, claiming the “Twitterati” would manipulate them. Importantly, however — in contradiction to all his previous claims that he never held another citizenship other than Australian, and that he renounced all citizenship before the election — Roberts claims that while he did apply before the election, he didn’t receive the confirmation documentation from the UK until December last year. This means that it is entirely possible that for all intents and purposes Roberts was still a dual citizen when he nominated and was elected.

It will just depend on whether he is challenged in the High Court on it, and whether it is considered he took “all reasonable steps” to renounce before nominating (as set out in the constitution), even if it wasn’t accepted by the UK until December. Given Roberts has been shown to have lied about this matter at every turn, it seems unlikely that it is about to go away quietly. Roberts’ office has now threatened to report journalists who ask questions about it to the police for “pestering or harassing”, Fairfax’s Bevan Shields has revealed: 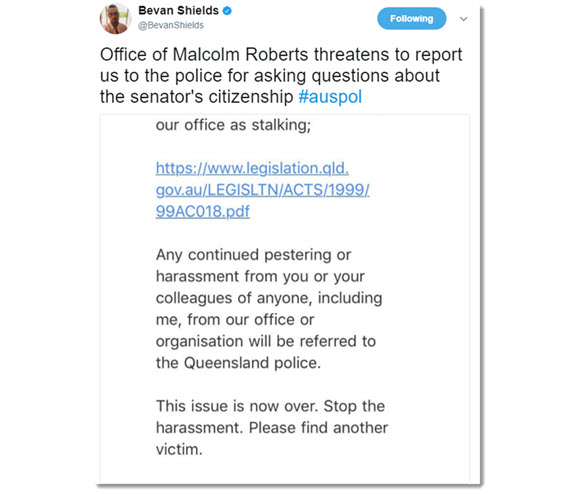 WHO ISN’T A DUAL CITIZEN?

Following Matt Canavan‘s Italian fiasco, The Australian reports today that 21 MPs in the House of Representatives have talked about their migrant heritage in Parliament, opening up debate over their heritage and whether they are eligible for dual citizenship. Those MPs include Deputy PM Barnaby Joyce (who said earlier this week he had never been to England, which was untrue, as he had traveled to England a few weeks ago), Trade Minister Steve Ciobo, Julia Banks, deputy Labor leader Tanya Plibersek and Steve Georganas. Banks in particular could be in trouble as although she was born in Australia, she is of Greek heritage and might be automatically eligible for Greek citizenship.

It is a precarious position for the government to be in. While a loss of a senator is easily fixed by a recount down the ballot, the resignation of a member of the House of Representatives would trigger a byelection, and the government only has a single-seat majority. Labor is already chasing David Gillespie because of an Australia Post outlet leasing space in a shopping centre he owns.

Labor has so far been refrained in calling for an overall review of politicians’ eligibility, suggesting that it might lead to mutually assured destruction.

On the other hand, it means that interest rates aren’t likely to go anywhere any time soon, meaning mortgage holders — those who can get into the property market — are fine for now. It is in contrast to warnings from Prime Minister Malcolm Turnbull last week that mortgage holders should be saving for the time when rates rise.

Someone has made complaints about two Tasmanian preachers to the state’s Anti-Discrimination Commissioner over comments they have made about homosexuality and atheism, The Australian reports. As the debate over whether or not to have a debate about marriage equality continues, opponents of marriage equality are likely to point to the complaints as evidence anti-discrimination laws silence dissent. It is worth reading the blog of one of the preachers — Campbell Markham — for an idea of the sort of stuff he says about homosexuality (and he has a lot of not very nice things to say).

Tony Abbott wants a brawl over coal in the Coalition partyroom.

Calls to dump Barnaby Joyce over recording on Murray-Darling controversy

Britain to seek stronger ties with Australia after Brexit — Boris Johnson (The Age): “My conversation was studded with words like “bonzer, mate” or “you little ripper”, and on the streets of London in broad daylight I insisted on wearing the same “stubbies” daks – shorts of appalling brevity – that I had worn in the bush until my then girlfriend said that it was her or the stubbies daks.”

Shorten shaping up to be the Corbyn to our kids — David Crowe (The Australian $): “Students are paying 90 per cent of the course costs in subjects such as law, accounting, economics and business. The question is not why students do not pay their fair share. It’s why the government stopped doing so.”

Home Affairs and Intelligence will be driven by the dollars — Laura Tingle (Australian Financial Review $): “The biggest question in bureaucratic Canberra in coming months will be who will fill two very powerful new jobs as director-general of ONI and head of the new Home Affairs Department.”

Our aged have earned right to make choices about voluntary euthanasia — Philip Nitschke (The Australian $): “The [Victorian] law is so ridiculously cautious that few people will be able to use it. With its 60-plus safeguards, the law is destined to fail even if it passes.”

The White House has somehow become an even less united front over the last 24 hours, with Donald Trump’s staff brawling in public. Most of the action is coming from new communications director Anthony (‘Mooch’) Scaramucci, who last night implied on Twitter that he wanted Trump’s chief of staff Reince Priebus investigated by the FBI for leaking.

This morning, Mooch called in to a live TV segment and walked back from — but then walked back up to — his public feud with Priebus. In his first press conference, Scaramucci said Priebus was like a brother to him. This morning, he gave that simile a biblical update: the pair are like Cain and Abel, he said.

The counting of results in Papua New Guinea’s national elections has been marred by confusion and violence. In one incident, former prime minister Sir Mekere Morauta was declared the winner of a seat, only for the returning officer to disappear and then declare the third-placed finisher the winner. The final outcome of the election, and the formation of a government coalition, might not be confirmed for some time. — ABC

More than 100 demonstrators have been injured after further clashes between Israeli security forces and Palestinians at the Noble Sanctuary/Temple Mount in Jerusalem. Israel has now removed the extra security measures that helped escalate the conflict, leaving Benjamin Netanyahu under attack from his political rivals on the right. He’s also facing a diplomatic stoush with Jordan, after evacuating an Israeli guard accused of killing an innocent Jordanian in an incident Israel believes was a terror attack. — Reuters

Amazon CEO Jeff Bezos briefly overtook Microsoft co-founder Bill Gates to become the world’s richest person today. Bezos surged past Gates thanks to the increasing value of his Amazon stock, which took his net worth to over $92 billion at one point, though that number eased back and Bezos returned to second place. — Bloomberg

The hijacking of the Brillante Virtuoso (Bloomberg Businessweek): “Everyone at sea that night survived. But the danger was just getting started.”

38 years on books: the essential Michiko Kakutani reader (New York Times): “To read a stack of new and reissued books about Mr. Trump, as well as a bunch of his own works, is to be plunged into a kind of Bizarro World version of Dante’s “Inferno,” where arrogance, acquisitiveness and the sowing of discord are not sins, but attributes of leadership; a place where lies, contradictions and outrageous remarks spring up in such thickets that the sort of moral exhaustion associated with bad soap operas quickly threatens to ensue.”

The manipulative tricks tech companies use to capture your attention (TED): “There’s a hidden goal driving the direction of all of the technology we make, and that goal is the race for our attention. And the best way to get people’s attention is to know how someone’s mind works. And there’s a whole bunch of persuasive techniques that I learned in college at a lab called the Persuasive Technology Lab to get people’s attention.”

Justin Trudeau: the north star (Rolling Stone): “Trudeau’s skeptics have declared him ‘emotionally intelligent.’ This is Canadian for ‘the man is a mimbo.’  But that’s not the case. Trudeau is the son of Pierre Trudeau, a 15-year prime minister and Canada’s iconic 20th Century Man. There are things he should have learned at the knee of Papa, as he called his father. But sometimes Justin doesn’t think things through.”

Listen to Russian pranksters trick Rick Perry into a conversation about pig manure (Washington Post): “During the conversation, which was posted in its entirety on Vesti, a Russian news site, Perry was convinced he was talking to Ukrainian Prime Minister Volodymyr Groysman.”

Will the media please wise up. There is lots of commentary this morning on Malcolm Roberts position and if he has taken “reasonable steps” to renounce his British citizenship. The “reasonable steps” test simply doesn’t apply in his case. It only applies when the other country makes renunciation either impossibly difficult or is not possible at all. The UK has a well published, relatively straight forward pathway. The sole determinant of Roberts’ eligibility is the effective date of his renunciation. Was it before or after the close of nominations? If it was before, we are stuck with him. If it was after he is ineligible.