Sky News on Ten? … mid-year Walkleys … Trudeau for (US) president …

Could Sky News be Ten's saviour? And other media tidbits of the day.

Today in Media Files, research by a media analyst finds a content-sharing deal between Sky News and Ten could benefit both networks to the tune of tens of millions of dollars.

Sky News for Ten would benefit both, analyst says. If Sky News were to produce news for the Ten Network under a content-sharing deal, tens of millions of dollars of benefit would flow to both networks, according to research by Global Media Analysis. The research, prompted by speculative reports about such a deal, found that Ten could save between about $10 million and $20 million under such a deal, while Sky could increase its revenue by between $15 million and $25 million.

But it looks like Gordon and Murdoch no longer have the field to themselves to take over the stricken free-to-air broadcaster. That might be a good thing, as The Australian Financial Review reports that nine groups have been given an information memorandum on Ten to allow them to prepare possible bids. The AFR also says the nine groups (which include the US’ Oaktree private equity group and US broadcaster CBS) have had to sign non-disclosure agreements.

But for Gordon and Murdoch to get their hands on Ten, the media ownership and reach laws will have to be changed. We will get the first inkling of the damage to the Murdoch media empire’s balance sheet in two weeks when News Corp reveals its 2016-17 fourth-quarter and annual results. A write-down by Foxtel of the remaining US$22 million or so of value of its 13.8% shareholding in Ten is expected, along with other impairments. Analysts are watching the 21st Century Fox fourth-quarter and annual results the same week for any write-down of the value of its program supply deal with Ten. — with Glenn Dyer

Mid-year Walkley Awards announced. The Walkley Foundation has announced the winners of its mid-year awards at an awards ceremony in Sydney. The industrial relations reporting award was handed to a team from The Age for its reporting on employee agreements negotiated by the Shop, Distributive and Allied Employees Association. The award was sponsored by the ACTU, which has the SDA as one of its members, and which, according to a Crikey tipster, had tried to put pressure on the board over the stories being shortlisted.

The revolving door. Fairfax politics reporter (and former Crikey media reporter) Matthew Knott is upping sticks to study at Columbia University in New York to study a master’s of arts in political journalism. He’s taken a leave of absence from Fairfax and plans to return in a year, once he’s completed the course.

Front page of the day. Rolling Stone has not been especially subtle in its latest cover story … 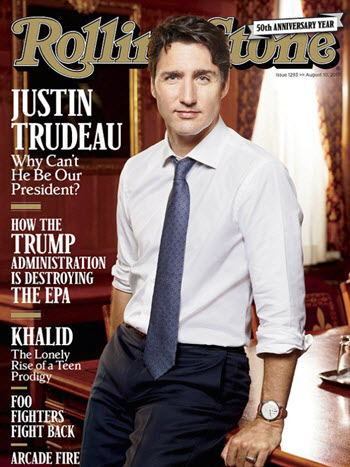 Changes to Adelaide’s ABC local radio line-up. ABC Adelaide has announced changes to its radio line-up following long-time breakfast presenter Matthew Abraham’s departure a few weeks ago. Abraham had presented breakfast with David Bevan for 15 years. Bevan told listeners this morning he would move to the mornings program, and Ali Clarke will take on the breakfast slot.

Facebook surprises with top financial results. Following Google’s better-than-forecast June performance announced earlier this week, Facebook has stunned with a 47%-plus surge in ad revenues to US$9.164 billion, as monthly user numbers hit 2.1 billion and daily user numbers topped 1.3 billion. Google said 87% of its ad dollars were from its mobile business, up from 84% in the June quarter of 2016.

Despite higher job numbers and costs, Facebook’s profit margins rose in the quarter. Both results make it a bit easier to understand why the US sharemarket hit new highs overnight Wednesday, and will continue upwards tonight.

Facebook’s shares rose 4% in after-hours trading, pushing the company’s value to US$499 billion. Earlier on Wednesday, Amazon’s market value topped the half a trillion level to close at US$503 billion. It reports its second-quarter figures tonight and analysts will be looking to see if details of its Prime membership numbers are released, as well as more information on the spending and other plans for its video on demand service which is now second to Netflix’s offerings (which reported at the start of last week and surprised with more members than forecast and higher revenues and earnings). — Glenn Dyer

But the big news wasn’t the fact that The Bach didn’t live up to 2016. No, it was the ratings hit Offspring took last night (now that MasterChef is no longer the lead-in) from having The Bach as the lead-in. You would have thought that The Bach would have helped, but it seems it was a hindrance. Offspring averaged 758,000 nationally last night, down 15% from 892,000 a week earlier.

For Ten The Bach might have fleshed out some younger female demos, which enabled the network’s main channel to slip past Nine (a Ninja let-down night) into second place last night. Seven won the night. Tonight we find out if the ABC’s new medical series, Pulse, is still alive or needs a trip to the ICU. If it does, it will join the AFL Footy Show for its rebirth next Thursday night with Eddie McGuire back in the chair and Sam Newman trying to reclaim past glories (or rather atrocities). It could be a final throw of the dice for Newman. In the regionals, a Seven night with the news at the top with 634,000 viewers, then Seven News/TT with 509,000, followed by Home and Away with 467,000, the 5.30pm part of The Chase Australia with 441,000 and then The Force with 435,000. — Read the rest on the Crikey website.

NOTE: This story has been updated to correct the name of Global Media Analysis.

Trudeau would be much better than the Frumpster.

Alas not born in the USA though very likely conceived there if tales of Studio 54 are true.