One Nation Senator Malcolm Roberts is refusing to show proof he isn't a British citizen, Matt Canavan might be in the clear, and ScoMo backs coal.

One Nation Senator Malcolm Roberts is fond of making a grand show to public servants in Senate estimates hearings about the importance of transparency and showing empirical evidence to back up sound policy on climate change, but when it comes to the issue of his citizenship, we are expected to take his word for it. He has released a statutory declaration claiming that he has renounced any Indian and British citizenship (he was born in India to a British father) but he is refusing to follow the lead of other politicians in releasing the documents proving it. He claims he is concerned that the documents will be manipulated. Sounds legit.

BuzzFeed News yesterday published documents that appeared to show that Roberts had traveled on a UK passport in the mid-1950s as a child. His claim he had renounced his citizenship is also contradicted by a statement his former staffer Sean Black gave to Guardian Australia last year that the senator had only ever held one citizenship.

The farce is compounded because Roberts is intending to try to get the Senate President and the Speaker to instigate an inquiry to ensure other MPs and senators are not dual citizens. Will that include himself?

It’s still not entirely clear how LNP Senator Matt Canavan‘s mother Maria was able to get her son Italian citizenship without his knowledge. ABC Lateline host Emma Alberici (who has Italian dual citizenship) went to the Italian embassy in Sydney yesterday and was told that adults had to get their own application in, and parents couldn’t do it on their behalf. But The Daily Telegraph reports today that Italian Resident Abroad forms from 2010 — a few years after Canavan’s mother applied — show parents can apply on behalf of their children without that child’s knowledge or consent, but then quotes an official who suggests Canavan would have to be there in person to sign the form.

Canavan has shown all the documents in question to Attorney-General George Brandis and Prime Minister Malcolm Turnbull, the paper reports.

Italian citizens are eligible to vote in elections and referendums, but the Tele suggests those forms were all sent to Canavan’s mother’s place for the past 10 years. And she never thought to mention it?

For those keeping tabs on other MPs, Concetta Fierravanti-Wells has shown she renounced her Italian citizenship in 1994, while Steve Ciobo has said he never held it.

Treasurer Scott Morrison is expected to back keeping current coal-fired power stations in existence for as long as possible in a speech in Adelaide today. He will say he doesn’t believe clean coal is a solution, however.

The Business Council of Australia, meanwhile, suggests it will be very unlikely that companies will make new investments in coal, and suggests it is a myth that investing in coal would drive power prices down to levels they were at five years ago.

Morrison is also expected to take up the fight to Opposition Leader Bill Shorten on inequality, suggesting things aren’t as bad as Shorten claims them to be, and fairness isn’t about taking from those who have earned simply to even the score. Raising taxes further would be a “lazy, cynical, envy tax”.

Canberra: The trial commences for the protesters who glued their hands to seats in the House of Representatives during question time in November.

Melbourne: Dimitrious Gargasoulas, who is alleged to have driven his car up onto Bourke Street Mall, will appear in court on an unrelated charge. AAP reports at his last appearance he “went on a strange court rant blaming ‘the illuminati’ and claiming to have been set up because he holds the key to Freemasons treasure”.

We can’t trust Trump on trade relations — David Uren (The Australian $): “The interests of Australia and of the Asian region are best served by continuing to engage as constructively as possible with Trump and members of his team, as Bishop has been doing, while working hard to conclude a successful RCEP trade deal as a demonstration to the US that multilateralism lives.”

Timing of Matt Canavan’s Italian crisis could not be worse for Adani or Santos — Matthew Stevens (Australian Financial Review $): “As resources minister, Canavan has been a fierce advocate of the Adani project. And, while he was the man with ministerial authority over NAIF, Canavan appeared to be in prime position to be able to translate that general support into something much more targeted and tangible.”

With a tap of his all-powerful “Tweet” button, Donald Trump has fired the first shot in a new American culture war. Across three tweets this morning, Trump announced that “the United States Government will not accept or allow…” “….Transgender individuals to serve in any capacity in the U.S. Military.” The pause between the first and the second tweets left some at the Pentagon waiting anxiously, fearful the president was about to launch a military strike on North Korea.

In 2016, the Obama administration allowed transgender people to serve openly, and there are now thought to be at least 2500 and as many as 15,000 transgender soldiers doing so. White House press secretary Sarah Huckabee Sanders was coy about what would happen to these people, and threatened to shut down her briefing as reporters continued to probe on the topic.

Trump cited health costs as a justification for the move but, as The Washington Post noted, the US military spends five times as much on Viagra as it does on medical care for transgender troops. In fact, it seems the announcement was an effort to win over conservative House Republicans, as the White House barters support for its legislative priorities.

A confidential UN report has accused Saudi Arabia of being responsible for a helicopter attack on a boat carrying Somali migrants that left 42 people dead. The March attack occurred off the coast of Yemen, where Saudi Arabia has taken a major role in combating the Iranian-supported Houthi insurgency. — Reuters

The European Union has voiced concerns about a bill passed by the US House of Representatives that would put Russia under new sanctions. EU Commission President Jean-Claude Juncker warned that if passed by the Senate and signed off by the president, the sanctions could threaten European energy supplies. — BBC

Just in case you haven’t been driven crazy by auto-play videos in Fairfax articles and on your Facebook timeline, Google has also started experimenting with the notoriously irritating feature. Some searches that return a video result are now allowing the clip to play automatically. — The Guardian

What happened in Ohio proves that Trump is only going to get worse (Mother Jones): “At this point, the idea of a maturing, pivoting Trump sounds foolish. (In truth, it always was.) But that doesn’t mean Trump can’t change. As his prospects grow bleaker and bleaker, the last 12 hours suggest his cultural power plays may grow darker and darker, too.”

An overdose, a young companion, drug-fueled parties: The secret life of USC med school dean (LA Times): “In another (video), Puliafito uses a butane torch to heat a large glass pipe outfitted for methamphetamine use. He inhales and then unleashes a thick plume of white smoke. Seated next to him on a sofa, a young woman smokes heroin from a piece of heated foil.”

The lonely crusade of China’s human rights lawyers (New York Times Magazine): “For lawyers who veer into sensitive areas of the law, the pressure is applied slowly; it begins with a simple invitation to tea from the police. What kinds of cases are you working on? an officer asks. Do you know what your colleague has been up to lately? How are your children finding their new teacher?”

Man in the middle (The Weekend Australian Magazine): “I resented the pressure not to report what I saw; I was covering the Middle East as an Australian journalist in the belief that events should be reported as you find them.” 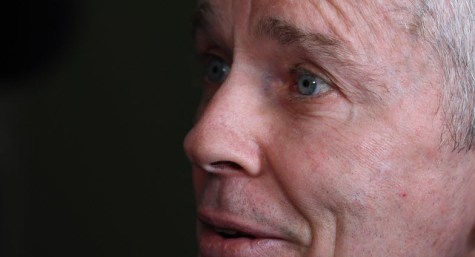