What would Jesus do? ... chip budget for Treasury ... made-up Brisbane suburbs ...

Jesus banned! Whenever The Australian‘s Rebecca Urban has an exclusive about anything to do with school kids and religion or Safe Schools, it is always useful to go check the source material. Today she has an EXCLUSIVE that “education bureaucrats” in Queensland have an “unofficial policy” banning Jesus talk in the playground.

The three reviews of religious instruction material in question from the Queensland government (from late last year to early this year, which we already covered) does say that evangelising outside of scripture classes should be stopped, and points out that in the material reviewed, the groups teaching religious instruction often call on students to go talk about Christianity to the students whose parents have opted out of scripture classes.

Interesting that a paper that campaigned against Safe Schools on the grounds of parental choice would suddenly be advocating for students to defy the wishes of parents. Also missing from Urban’s report is what the groups were teaching kids. The teaching material includes discussion of rape, torture and slavery, and one section where a character is introduced as “a prostitute … she was considered to be of the lowest social position in that society”. There is another lesson that discusses a woman being distressed and being teased for being childless. Kids are also taught about child and animal sacrifices, as well as being taught how to play a game of “slave tag”. It’s interesting that those particular details were absent from Urban’s report.

Party on. On budget night this year, Treasurer Scott Morrison was happily telling journos about the difference between good debt and bad debt, with infrastructure classed as good debt, and other costs that didn’t contribute to the economy classed as bad debt. Now Ms Tips wants to know if potato chips and corn chips are considered good debt or bad debt. In documents released to Senate estimates, Treasury says a budget night party hosted by ScoMo cost the taxpayer $7872.80, with a receipt for Parliament House catering and a Coles Manuka receipt for around $50 attached. We’re glad to see the 217 people in attendance could choose between Nacho Cheese and Cheese Supreme Doritos and chicken-flavoured chips. The receipt doesn’t make it known if salt and vinegar chips were available, which is a shame, because any money spent on those is obviously good debt. 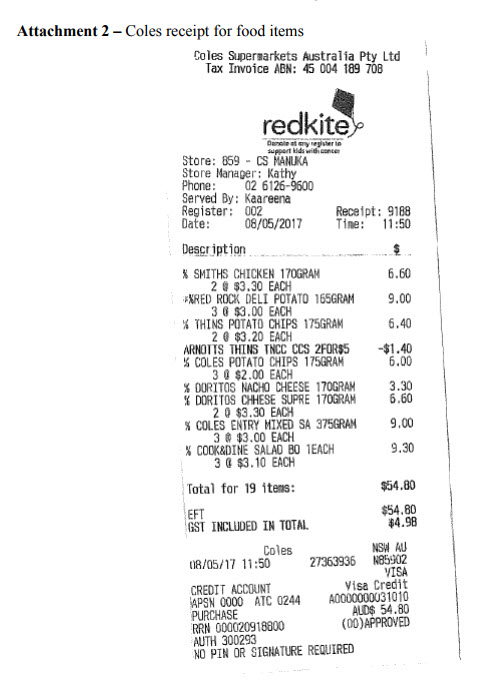 Train to nowhere. The Cross River Rail project has the status of Holy Writ in Brisbane. The 10-kilometre, $5 billion rail line is the subject of considerable vexation between the Queensland government and the Commonwealth, which has refused to commit funding to it except for a vague commitment at some point in the 2020s, prompting the Palaszczuk government to promise to “go it alone”. Alas, Infrastructure Australia didn’t get the memo about how wonderful the project is: it thinks the project’s benefits had been oversold in the government’s business case.

Not all is lost, though — the project remains: “a High Priority Initiative on the Infrastructure Priority List. This rating recognises that the emerging problem of rail capacity into and through Brisbane’s CBD is a nationally significant infrastructure problem which will need to be addressed.”

But IA didn’t help its case by managing to make up a Brisbane suburb called Hill Gate in its map, prompting Queensland deputy premier Jackie Trad to tut-tut that IA should “get some of those basic facts right”. This morning, IA rushed out a revised assessment referring more correctly to “Highgate Hill”. You might want to hold off on having any IA board meetings in Brisbane for the next little while, folks.

Nick Xenophon for the ANU Students Association? A group of students at the Australian National University attempting to run in their student election under the name “Nick Xenophon Team 4 ANUSA” have been given a stern warning from the Senator himself, who isn’t making a move (back) into student politics. The ticket, which seems to be a joke, set up a Facebook page with with policies to rein in “reckless spending” on free diaries for ANU students, ensuring Australian National University Students Association submarines are built in South Australia, and improving parking for South Australian students making the 13-hour drive to class each day. 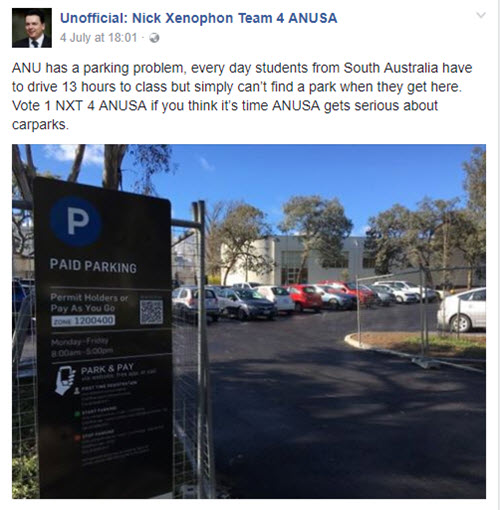 Xenophon staffer Frank Pangallo told the ANUSA ticket the page was unauthorised and no permission was sought nor granted to use the Senator’s name and image.

“This is a clear violation of the Senator’s intellectual property rights, is a misrepresentation and is grossly misleading,” he said. “The use does not meet the ‘fair use’ exception to copyright and therefore would be found to be an infringement.”

While many of us don’t take what goes on in the (university) halls of power too seriously, Xenophon does. In 2015, former PM Julia Gillard was forced to apologise to Xenophon for incorrect claims she made about him when they were students at the University of Adelaide in her autobiography.