Deflating statistics. Inflation for the June quarter is likely to get the pessimists going again — it was well below expectations at 0.2%, according to the Australian Bureau of Statistics this morning. In the year to June, headline inflation was 1.9%, down from 2.1% in the year to March. Both of the Reserve Bank’s preferred inflation measures, the trimmed mean and the weighed median, came in at 1.8%. Forecasters had expected a result of around 0.4%; the result was driven by falls in fuel and clothing; only health insurance premium rises showed strong positive growth. On the bright side, that means it’ll be harder for wages to slip into negative real growth territory. The March Wage Price Index was 1.9%; if continued in the June quarter, that’ll mean that wages are only stagnant, not falling. Celebrate!

Was our invitation lost in the post? A caller to 3AW says a government agency spent $43,500 on a going-away party for its CEO, which sounds like a hefty price tag. So who was the event for? Could it have been Australia Post’s shindig to farewell Ahmed Fahour? If you know more, drop us a line.

Good on you Mum, tip top’s the one. The political world is still saying “Mamma mia!” about the resignation of Senator Matt Canavan from the ministry after it turned out his mum signed him up as an Italian citizen without his knowledge when he was 25. The case will now go to the High Court, as Canavan believes he couldn’t renounce citizenship he didn’t know he had. So it got us thinking in the Crikey bunker — what have other people’s mums signed them up for? For most of us, once we were past school our mums stopped with surprises such as that. Ms Tips’ mum is more likely to visit with a shopping bag of vegetables and a lecture than a new passport. Let us know, what has your mum signed you up for well after you were old enough to be doing it yourself? Drop us a line.

Surely this is a porky. The world of Aussie rules football is often quite weird, but this story from the last weekend of footy has taken the world of sledging to a new level. Adelaide forward Josh Jenkins told FIVEaa radio in Adelaide last night he had been the victim of a prank by his Geelong opponent Harry Taylor after Friday night’s match. Jenkins almost missed the game after some dodgy ham left him bedridden with food poisoning for two days, but he managed to get on the field for the win. Jenkins said Taylor used the incident as inspiration for a joke at the end of the match: “He shook my hands and when we separated there was ham in my hand — probably 25gms worth from the deli. I don’t think it was smoked. I wasn’t getting too close to it … I was going to throw up.”

We just want to know where Taylor kept the ham during the match. Or maybe we don’t.

Don’t mention coal. Indian coal-mining giant Adani is starting a public relations assault in Australia, full of smiling faces so glad to have jobs. After a four-page spread in The Sydney Morning Herald on Sunday, the company is back at it, this time with a spread in The Australian. “You might have heard of us,” the glowing copy reads as it explains “when you hear ‘Adani’ think ‘energy’, think ‘future’ and think ‘long term’.”

As pointed out in Junkee over the weekend, nowhere does the advertisement mention the word coal — while it talks about the Galillee mine, there’s nothing about what will actually be mined. It does mention that the company is planning solar projects in Queensland and South Australia though. If coal is “good for humanity” as former PM Tony Abbott said, we’re surprised it didn’t get more of a run in the ad. 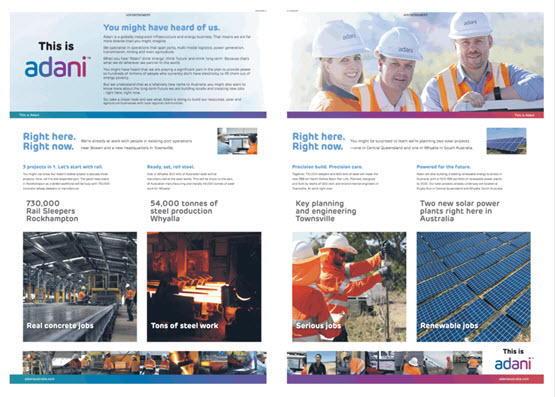 “Adani – what bunch of coals.”

Can there be a more immoral, destructive industry (excluding Shaitan’s spawn, lawyers) than advertising?
This used to be regularly demonstrated on the Gruen Transfer when two agencies would be given the task of promoting something truly evil and the sheer genius brought to the fore was a kick in the groin for the Enlightenment and a refutation of the Education Act.
For all the protestations of Todd “the thinking woman’s crumpet” Samson about principles, it should not be overlooked that the agency of which he is head has some of the most immoral products and clients known to capitalism.

Why is the comment section again being mucked about, again – wot is it with tekkies that they just can’t leave well enough alone?
After that strange beta(?) format on Monday, then semi reversion to the ‘norm’ but retaining the strange ‘notify‘ option of responses in general or specifically to ones own, now we, or at least I, am not receiving any notification of subsequent comments