The retrograde sexual politics of Ten’s The Bachelor

Thin, white, pretty women who catfight and scheme to win the attention of a bland, Ken doll-looking man? What could possibly be wrong with that?

Like so many love stories, this one starts the same, once a year. A handsome, inoffensive man chosen as The Bachelor is matched with a couple of dozen beautiful ladies who are all on journey to find love. They compete through each episode for his affection — demonstrated with a rose at a dramatic ceremony.

Or, as University of Melbourne social and political sciences senior lecturer Lauren Rosewarne puts it: “Women catfighting their way to the affections of a generally underwhelming man.”

The gender stereotypes the show portrays are similar to what you’d see elsewhere in popular media, but they’d have to be among the most overt on The Bachelor, where conflict between the women is played up, and all power and decision-making is handed over to the man.

Rosewarne told Crikey the story that The Bachelor tells about gender can be seen in other reality TV shows, soaps and romantic comedies. “The show — like much reality TV — makes a variety of assumptions about gender: that a woman’s worth is defined by how much a man wants her; that a little of a man is better that none; that women are in a lifelong battle with one another for the affections of men. Such shows place disproportionate worth on the man — often as related to income — and elevate him as the one who decides a woman’s fate and worth.”

It’s a popular show — the troubled Ten network has been relentlessly promoting it for weeks in the lead-up to this season’s premiere, with publicity stories running on all major (and some minor) news websites. It launched to 1.108 million viewers last night — down on last year, but still a strong performer for the network.

There was a Bachelor party pack ready for download from Ten’s website, which includes Bachelor bunting, ready-to-print emojis to show your reactions for the “OMG moments” and Bachelor bingo. The show has spawned a whole genre of Bachelor recaps over the four seasons of The Bachelor, and three of The Bachelorette (you can’t help but think the show is edited especially for gifs). News and gossip websites have writers dedicated to recapping and writing up quick reports and reviews, ready for sharing. Intelligent women watch it, chatter about it on social media and then follow the recaps that make fun of the show.

ABC Radio National’s Life Matters asked three Australian feminists in 2015 how they could watch the show when it had such an anti-feminist premise.

ABC Tasmania radio presenter Melanie Tait told the program she felt guilty watching it and donated $10 to a feminist organisation or cause for each episode she watched. Rosie Waterland, who became known for her popular Mamamia recaps, put the appeal of the show down to escapism, as well as it being a community event to talk about during and after.

And Rosewarne agreed, saying everyone likes escapism. “Equally, it would be erroneous to assume that viewers aren’t capable of watching critically, cynically or even mockingly,” she said.

Even before this year’s season started, it was panned for its lack of diversity. This is a common refrain in commentary of the original US version of the show, too, which only this year after 21 seasons of The Bachelor and 12 of The Bachelorette had a black bachelor or bachelorette. 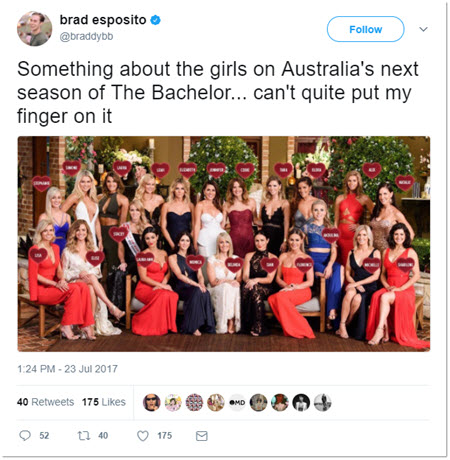 This year’s cast is extremely white — in a nod to diversity, one contestant, Elora, is from Tahiti and ads for the program labelled her as “exotic”. She was one of the lucky ladies to receive a rose. The Bachelor himself, Matty J, told news.com.au the diversity issue is a question for Ten.

Rosewarne says the whitewashing of The Bachelor is just another element of the gender narrative that the show promotes.

“The lack of diversity reminds us that non-white, non-thin, non-cookie cutter ‘beautiful’ women are never going to be the ‘chosen ones’ in this culture,” she said.

A common defence of the show is that there is also The Bachelorette, where the gender roles are reversed. But that is an oversimplification of a problematic premise, Rosewarne says.

“Inserting a woman into a role that is fundamentally problematic doesn’t make that role any better,” she said.

But all this is not to overstate the impact shows like The Bachelor. It might be popular, but it’s only one among many messages we get about gender roles.

“I think the impact is low,” Rosewarne said. “We’re saturated with a deluge of mixed messages about gender relations; assuming that The Bachelor is more persuasive than any other is hyperbole.”

Why people ever watch this tripe is beyond me.

That’s why there’s only you and me commenting on it. It’s degrading to any and all genders.

Retrograde – in astronomy, describes the orbit of a celestial body that runs counter to the direction of the spin of that body which it orbits.
Don’t worry, Emily. A rose awaits you.

Tacky and trashy. Next.

It always seemed strange that the megahit “If You are the One” from China, with its well known, dangerous gender imbalance had 2 dozen women competing for a single dork – it was always heartening that most often all 24 turned the ‘prize’ down. (I believe that there is now a reverse one being trialed).
In the UK the current craze is The Island which has a similar format to Bachelor and it was nauseating to hear the number of otherwise well regarded women in public life who not only watched it compulsively, but several watched it with their daughters!

It’s the same as the “women’s” magazines. Talk about empowering issues on one page followed by an article on how to get thinner on the next.