Roll up, roll up, the George Pell media circus is in town

Not a journalist in Melbourne was going to miss 10 minutes of George Pell at a filing hearing.

“Don’t you feel sorry for anyone who’s just here to get their drunk driving charge overturned?” I overhear one of the ABC crew say from within the throng of journalists, protesters, supporters and onlookers gathered at Melbourne Magistrates’ Court to see Cardinal George Pell arrive for his filing hearing for charges of historical sex offences.

“Oh, good old Crikey, well, you’ll get a picture,” says the Reuters photographer. For most of the media — Pell is in court for roughly 10 minutes, and outside it for collectively maybe another 10 — the amount of coverage a brief filing hearing has attracted is itself the main topic of coverage.

The line of journalists is already snaking around the front of the building as Crikey arrives a little before 8am. No surprises that Herald Sun court reporter Shannon Deery is at the front. He tweeted his disbelief that today’s event wasn’t being held in the biggest courtroom available a few days ago. A few places back is David Marr, whose Quarterly Essay “The Prince” is currently nestled against the laptop in my bag. He’s perpetually on his phone, like all high-profile people in public places.

The TV crews zigzag between the pavement and the road, cordoned off by traffic cones. Sky, then Channel Ten, then Nine, the ABC and finally Seven. The crews swap places throughout the morning, getting different framing and coverage. The TV reporters are serious and slightly insular, retreating to their phones when not setting up or doing their pieces to camera. The camera operators and photographers are more amiable.

At about 8.15 the scrum tightens around the first of the visible protesters. He’s wearing one of those creepy white masks, painted with streaks of blue and yellow, his spiky blond hair receding. He’s interviewed by some of the networks, but the mask gives his words an echoey buzz and he’s impossible to make out from even a few feet away. He’s joined throughout the morning by a modest group (10, maybe 15) from the child sex abuse survivors advocacy group; there’s no shouting, no anger, not yet. Just solemn silence and signs with statistics and a number for Operation SANO. Later, supporters of Pell, about as many as the protesters, set up a little way away. They are both mature groups, quiet, serious. There’s no hint that they are going to clash.

The parameters of what’s known publicly means certain phrases come up from every TV reporter — “… multiple allegations …” “… strenuously denies” “… the highest-ranking Catholic to have had charges brought against him …” “… he says he’s looking forward to clearing his name …”  “… not just Australian media, but the eyes of the world are on Melbourne …”

Another photographer from The Age is sceptical about this claim: “Look, if the trial progresses then you’ll see a lot more people here, but for a 10-minute hearing, people aren’t going to send a bunch of journalists unless they already have a base here, or it’s easy for them to hire someone — I reckon it’s been a bit of a boon for freelancers, but …” His phone goes “‘Scuse me.” He walks briskly to the corner where William Street hits Londsdale. It’s just before 9am.

A few seconds later, there’s a scramble of photographers, cameras flashing like a firing squad, crawling down the street around a ring of police, within which is Cardinal George Pell and his QC Robert Richter. Journalists shout questions — rendered incomprehensible by the tangle — presumably just so they can say they did. A policeman shouts, low and rhythmic and steady. “Move. Move. Move.” People walking backwards, looking at their cameras, fall. I move a few steps up towards the courthouse, and raise my phone to take pictures, thinking the crowd will pass to the main door, but it follows me. There’s a moment of panic as we hit the stair banister, nowhere further to go, and the scrum continues to swell. I get off relatively lightly, the poor AFP journo next to me forced to limbo backward over the railing, “I can’t go any further, I can’t go any further.” The police continue to push. It’s only after the major swell is past that I can actually see Pell. The adrenaline and tension of the moment passes as quickly as it arrived and gives way to laughter. The AFP journo is unhurt.

And then we return to the crowded but relatively relaxed atmosphere we had before Pell’s arrival — everyone retreats to their phones, people who’ve been here since 6am go to get food. The pack thins slightly, or maybe it just feels that way because we aren’t swelling every few minutes with annoyed commuters. More civilians arrive, these guys seemingly having no particular attachment to the case, just drawn by the crowd itself.

There is none of the mad dash to capture Pell’s exit — while there was conjecture about whether Pell would arrive by car or by foot, from his lawyer’s office or from another direction, there’s only one door through which he can exit and the thrum are gathered at that door from about 10am. At 10.11am, the madness repeats — the explosion of camera flashes, the tangle of questions, and this time, as the wave rolls around the corner to his lawyer’s office, growing yells, both from supporters and detractors. One woman, holding a sign that says “Thank you George Pell for helping our family” actually lets out a whoop of joy when she sees him. The group stays, clogging the entrance to building containing Richter’s office, interviewing protesters and supporters.

Slowly, the pack scatters. An employee from the cafe next door walks out on the street, grumpily picks up the sandwich board the media knocked over, and the madness, for now, has passed. 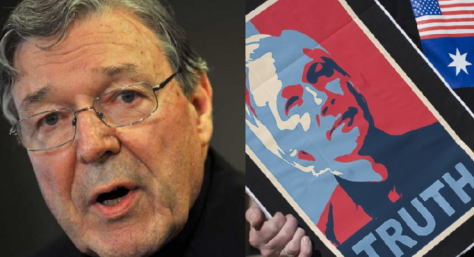 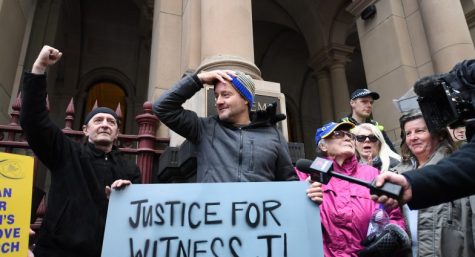 Cheers and confrontation outside court as Pell’s appeal is dismissed

There’s no chance that George Pell will be able to clear his name. The verdict in any trial will be either ‘guilty’ or ‘not guilty’. The stain will forever cling to his name. If by some considerable misfortune, Pope Francis were to die, George Pell would never have a chance to become pope. The other cardinals would never vote for him.

I wonder about the use of the word ‘thrum’ in the second last paragraph. Is it a typo’ or is it a vivid use of a word usually used to describe an incoherent sound to describe a visual image of a crowd of journalists?

“Throng” I reckon…..and yes I think you are right (not that Pell ever had a chance of being Pope).

That was my intention with the use of the word thrum – this rhythmically humming mass gathered in front of the door of the court. But given you guys aren’t the first people I’ve had to clarify that to, praps I wasn’t being as vivid as I’d hoped….

Nowt wrong with ‘thrumming’ – the visceral/corporeal impact of stroking the lower bass chords.

is a historical sex charge the same as a historic sex charge, which this is, or does it mean that it is passe, not of too much concern?

Does it show the power of prayer than the “heart problem” (lack thereof?) which prevented Pell appearing in person before the RC has been miraculously cured?
More likely Francis cutting him adrift.

Big George’s recovery from ” a lack of heart problem” is indeed a most Holy Roman blessed miracle and is also God’s way of letting us know he is completely innocent , hallelujah ! MAGA ! Stop the #WarOnCatholics ! Amen.