Crikey Worm: Canavan caught by section 44, Bernardi raking it in, ICAC called in over Murray-Darling

Matt Canavan becomes the third senator pinged by section 44, Cory Bernardi books nearly $1 million and ICAC called on Murray-Darling allegations. It's the news you need to know, by Josh Taylor and Max Chalmers.

MAMMA MIA! HOW CAN THEY RESIST THAT HEADLINE? 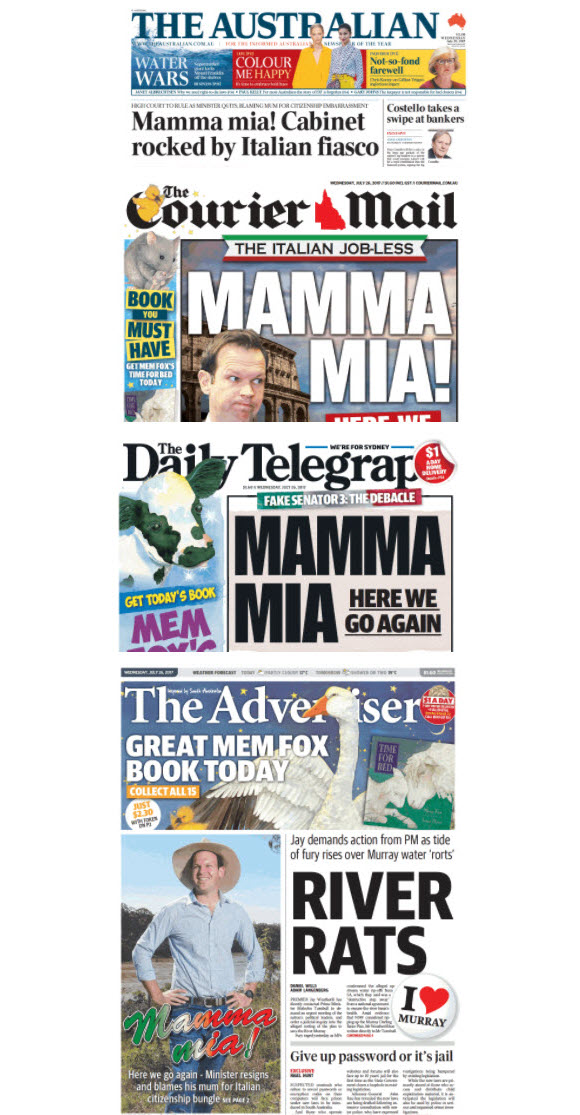 Media diversity is on full display today as most of News Corp papers (the Herald Sun and Hobart Mercury appear to have refrained) apparently could not think of a different headline for the news that Turnbull government minister for resources and the biggest Adani backer in government Matt Canavan has stood aside from the ministry. Canavan becomes the third senator in two weeks to fall foul of section 44 of the constitution, but he is pleading ignorance because his mother applied for Italian citizenship on his behalf in 2006, and he says he had no idea about it. Blaming his mum puts him in the same basket as Shane Warne, but it’s very un-Italian.

Unlike Larissa Waters and Scott Ludlam, Canavan is not resigning from the Senate, however, signalling that the Senate will take the matter to the High Court. The benefit of government is that Canavan had both the Attorney-General George Brandis and the Solicitor-General to consult on the matter and determine that there was a case to seek clarity from the High Court. The question will likely be around whether someone who is unaware of their dual citizenship is therefore ineligible. The case could have an impact on Waters and Ludlam, too, although both have already resigned and both were born in other countries, while Canavan was born in Australia.

There are still many questions as to how Canavan could not have known his own mother took out citizenship on his behalf when he was an adult, nor how it never came up when Canavan decided to run for politics and had to tick off that application form. We will no doubt get all the details when the High Court hears the case.

Australian Conservatives leader Cory Bernardi is boasting that since he split from the Liberals started his own party in late April, he has managed to raise more than $750,000 in donations, according to Fairfax. He claims that he has received donations from 18,500 people, with an average of $35 per donation. Normally we wouldn’t find out all this information until February next year, but Bernardi is clearly keen to boast about how much he’s getting from disaffected conservatives, and he says he is trying to be as transparent as he can be. It would be interesting to see whether those donations came from any big businesses or donors. Not that transparent, it seems.

Bernardi says he hasn’t received a donation from Gina Rinehart, and the largest declarable donation was $129,600 from Family First when the two parties merged.

On Monday night, ABC’s Four Corners program alleged that NSW irrigation lobbyists were offered confidential government documents about the Murray-Darling basin plan to help them with their lobbying against the proposal.

In the wake of that report, the NSW Labor opposition will refer former water minister Kevin Humphries and the bureaucrat allegedly recorded making the offer — Gavin Hanlon — to the Independent Commission Against Corruption. NSW Primary Industries Minister Niall Blair has appointed an independent investigator into the matter.

‘The last term we are bound’: Abbott’s words on marriage policy come back to haunt him.

SA to send suspected crims to jail if they refuse to hand over their passwords.

Melbourne: Cardinal George Pell will face court this morning for a filing hearing for charges of multiple historical sex offences.

Canberra: Former Queensland premier and now face of the Australian Banking Association Anna Bligh will be giving a speech on “Banks and trust, people and politics” at the National Press Club.

Sydney: Former Treasurer Peter Costello is expected to criticise the pay packets of banking execs in a speech.

Turnbull needs Matt Canavan to roll on — David Crowe (The Australian $): “Turnbull has acted prudently in accepting Canavan’s resignation from cabinet even as his former resources minister stays in the Senate. To be as safe as possible, the Prime Minister and others thought it would not be enough for Canavan to step aside pending the court ruling. The implication is that Canavan should be able to reclaim his place if he succeeds.”

Bill Shorten’s inequality pitch has rustled the jimmies of conservatives — Greg Jericho (Guardian Australia): “That data shows that the share of national income held by the richest 1% is indeed at the highest since the second world war – if you exclude the abnormal spike which occurred due the Korean war boom.”

The tragedy of the Murray-Darling river system is man-made (The Age): “The federal government, under pressure especially from the NSW government, has introduced policy changes that are threatening to kneecap the plan, beginning with capping the buyback of water for the environment.”

A right to protection from torture and suffering — Andrew Denton (The Australian $): “It is not about a ‘right to die’. It’s about a right to ask for help if you are dying and beyond meaningful medical relief.”

Donald Trump’s ongoing feud with his Attorney General Jeff Sessions has worsened, with the president tweeting that Sessions “has taken a VERY weak position on Hillary Clinton crimes (where are E-mails & DNC server) & Intel leakers!” On television and in conversation with pundits, members of Trump’s communications team made clear that the president was greatly displeased with Sessions, who recused himself from the Justice Department’s Russia investigation, and whose job is now in the balance.

But Trump might have to wait to deliver the catch-phrase he made famous on The Apprentice. Sessions is well liked among much of Trump’s base, and far-right organs like Breitbart appear to be fighting for Sessions.

Trump also took time off from baiting his cabinet to regale American Boy Scouts with his achievements, using an aside in his remarks to remind them of the key states he won in the 2016 election. In the meantime, Republicans in the Senate are debating various plans for the future of America’s healthcare system.

The Israeli security cabinet has voted to remove metal detectors installed at the entrance to the Aqsa mosque, the third holiest site for Muslims and one of the most hotly contested zones of the Israel-Palestine conflict. After an attack at the site by three Arab-Israeli citizens, the detectors were installed, provoking a mushrooming dispute that has threatened to spill into massive violence. — Reuters

The last killer whale to be born in captivity at SeaWorld has died, aged just three months old. The whale, known as Kyara, is thought to have succumbed to pneumonia. SeaWorld no longer breeds whales in captivity. — BBC

The true nature of John McCain’s heroism (The New Yorker): “By dismantling the last pillar of American contempt for Vietnam, McCain, in partnership with Kerry, led the way to the lifting of the embargo, the diplomatic recognition of Vietnam, and the true end of the war. The friendship that developed between the famously antiwar Kerry, whose protests had been despised by the prisoners in Hanoi, and the lionised patriot McCain became a hopeful example of American reconciliation.”

I don’t want to hear another fucking word about John McCain unless he dies or actually does something useful for once (Deadspin): “In 2008, the press mostly, finally fell out of love with McCain, in part because he was running against Barack Obama, but also because it became painfully clear that McCain was and always had been a mostly unremarkable party-line Republican, whose obvious discomfort with the far-right was not actually supported by the backbone necessary to challenge the far-right.”

The meaning of India’s ‘beef lynchings’ (The Atlantic): “The spectre of mob violence sparked by accusations that the victims slaughtered or smuggled cows or ate beef haunts India with morbid regularity. The phenomenon confirms, and perhaps even exceeds, the fears expressed by many critics of Prime Minister Narendra Modi and his Bharatiya Janata Party’s nationalist agenda, which they say is grounded not in bold economic reform, but in polarising social conflict between Hindus and Muslims.”

Unlocking the secrets behind the hummingbird’s frenzy (National Geographic): “With their rocketing movements and jewel-like plumage, hummingbirds seem like a hybrid of flesh, feather, and fireworks. The wings of some species flap up to a hundred times per second. Their heart rate can exceed a thousand beats per minute, and they gulp nectar with a near-invisible flick of the tongue. In gardens or at backyard feeders, they’re the definition of fleeting beauty.” 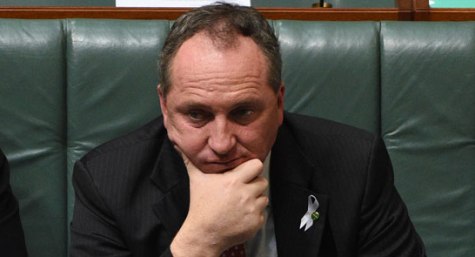 No water shortage problems for Humphries where he lives with the combined total for Port Macquarie and Cowarra dams at 94%. Unlike the Menindee Lakes however; less than half-full at 42%. Nice one Kev.