ABC merger … and the lucky winners are … puns cucina povera …

The ABC is merging its news and radio divisions in the ACT. And other media tidbits of the day.

Today in Media Files, the ABC is merging its news and radio divisions in the ACT, as it announces the winners of its content fund.

An ABC spokeswoman told Crikey the merge would only occur in the Northbourne Avenue office in Canberra, with no plans to do the same at any other sites.

ABC content fund winners announced. The ABC has announced the first projects it will fund under its content fund (called the Great Ideas Grant), with lifestyle and digital projects featuring heavily. The projects include a new lifestyle “coordinated approach” to content, a true crime podcast brand, and an ABC Parents project. In an announcement to staff, managing director Michelle Guthrie said the ideas “truly demonstrate what collaborative and multi-platform ideas look like”.

Applications for a Great Ideas Grant were open exclusively to ABC staff. All staff could pitch ideas to be funded from a total pool of $20 million this year, which will increase to $50 million per year in following years. The GIG is funded by cuts announced in March this year, mostly to middle management roles. The winners were chosen by an “audience committee”, made up of Guthrie, head of news Gaven Morris, head of TV David Anderson, head of radio Michael Mason, head of ABC regional Fiona Reynolds, and the head of Audiences Leisa Bacon.

Mamma Mia! What a great headline! As noted in Crikey Worm this morning, the obvious headline was hard to resist for newspapers covering Matt Canavan’s dual citizenship revelation yesterday. The Herald Sun, The Mercury, the NT News and The Australian Financial Review all managed hold themselves back. 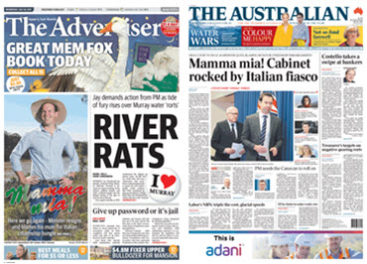 Struggling Guardian cuts losses by a third, quadruples memberships. At last some good news about the financial health of The Guardian and Observer newspapers in London. After two years of big losses and more than 300 job cuts — including halving the size of the US news operation — it seems the financial position of the Guardian Media Group (GMG) is slowing rightsizing itself.

Losses from running the business, excluding exceptional items such as severance pay and depreciation, were 44.7 million pounds in the year to April 2, down from 68.7 million pounds in 2015-16. Staff costs fell from 150.8 million pounds to 136.2 million pounds year on year. The sale of the shareholding in publicly-listed Ascential (a business to business services company) has boosted GMG’s endowment fund, which absorbs the newspapers’ losses, from 765 million pounds ($A1.25 billion) to 1.03 billion pounds. At the same time the company is eating into this cash pile at a slower rate than the year before.

Membership is the company’s way of substituting a paywall for a free website. The fee is graduated according to access and what the member wants to pay. GMG CEO David Pemsel said the growth in membership, subscriptions and contributions was helping to build a strong foundation from which the company can invest in journalism.

The company is still planning to be break even in two years, which will mean more than 40 million pounds a year in new cost cuts will be needed, according to UK media analysts. As part of that plan The Guardian will move to a tabloid size, junking or selling three presses designed to produce the so-called Berliner-sized paper (halfway between a broadsheet and a tabloid).

Glenn Dyer’s TV Ratings. So did anyone win Australian Ninja Warrior last night? I don’t think so, but does Nine know? Its retrospective explanations of how the Ninjas finished last night left a lot to be desired; its ex ante briefing of the audience was non-existent. It was a very confusing end and, judging by social media, it was a bit of a let down or a disappointment. The program was the most watched no-news program of the year so far with 3.087 million national viewers — 2.145 million metro and 942,000 regional viewers for the final stage, which no one won. That’s the situation with the format offshore — such as the US, but it is inconclusive. Nine’s win had Ten fall to fourth behind the ABC in third and Seven in a very distant second.

The rest of the program averaged 2.921 million nationally (2.038 million metros and 833,000 in the regions). And that was the night with Nine a winner and a grinner. — Read the rest on the Crikey website

It’s not a surprise to see The Australian stridently morphing into The Daily Telegraph and other rags of puerile nonsense.

Not completely, yet. I believe that it still uses the occasional word containing more than two syllables.