Branch-stacking lessons from the best ... Aunty racks up the clicks ... racist posters on campus ...

How not to stack a branch. Liberal Party infighting has been so fun to watch in the past few weeks we hope Sarah Ferguson is considering the Killing Season Season 2, but sometimes we wonder if the Liberals really are taking a leaf out of Labor’s book. The Australian is reporting today that Jim Molan and Walter Villatora are accused of offering to help pay membership fees and attendance fees for the weekend’s New South Wales Liberal conference for those who were sympathetic to the Warringah motion to change party preselection rules. It’s also reported that a bus was organised to transport people to the conference. In the report, Molan says it isn’t against party rules to “[pay] for others”.

“When you charge Liberal Party members $100 to renew their membership by pushing the convention out past the end of the financial year, you then charge them $150 to exercise their right to come along and vote, it’s only fair that people who can’t afford to do it are assisted by those who can,” he told Rachel Baxendale at The Australian. There are allegations that 90 attendees were paid for by one credit card, which seems to have been taken from the branch-stacking playbook. In 2015, the Victorian Labor Party suspended internal elections and expelled a member while the use of credit cards or visa gift cards, which don’t have a name attached, to pay for memberships was investigated. Perhaps it’s branch-stacking for one party and not another? We’re not so sure.

You’ll never guess what’s happening at the ABC. Ms Tips understands that there’s a lot of disquiet about the “GIG” economy at the ABC, but the issue isn’t Uber or Deliveroo. The $50 million “Great Ideas Grants” fund is a content fund promised by managing director Michelle Guthrie around the time job cuts at the national broadcaster were announced in March. Ms Tips found it interesting to hear what makes an idea “great” for the fund. According to a tipster, the main criteria for success is online audience engagement, with the feeling that worthy journalistic ideas that aren’t clickable won’t get a look in. The ideas are voted on by fellow ABC staff. There’s an increasing feeling of “google-isation” at Aunty — The Guardian‘s Amanda Meade reported on Friday an ABC podcasting event included a feedback session where “attendees were asked to sit in a ring and select a plastic toy from the centre of the group that most represents how they feel and speak ‘through’ it”. We hear the concern about ratings for 7.30 and Four Corners is palpable in this new environment, and Aunty is starting to feel more and more like a commercial organisation. Know more? Drop us a line. You can remain anonymous if you wish.

Racist posters pop up at unis. A string of racist posters ostensibly banning Chinese students were found across the Melbourne and Monash university campuses yesterday morning.

The posters bore the official logos of the University of Melbourne, the National Union of Students (NUS), the Chinese Students and Scholars Association (CSSA) and the Monash Students Association Logos (MSA). A Melbourne blogger translated the posters as follows:

“Attention! No Chinese are allowed within this area. If intrusion occurs, deportation will likely happen.” 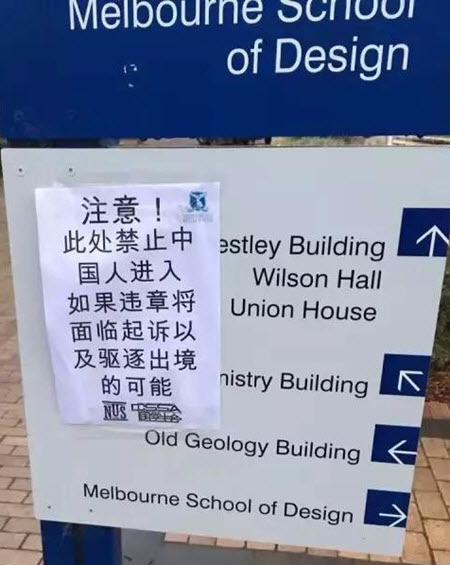 However, the CSSA immediately condemned the creation and distribution of the posters and stated it reserved the right to take legal action against those responsible.

The posters have instead been attributed to white nationalist group Antipodean Resistance, with a hyperlink to the group’s website found on the back of the posters.

Sorry Ms Tips: the main criteria for success (is) are

Even better: the main criterion for success is

Y e e s, I feel it too! Sitting in circles, a soft toy for each . . . genuinely brilliant Michelle. And at long last . . . “Aunty is starting to ‘feel’ more and more like a commercial organization.” I do, I do feel it.

The animal which comes to mind relating to ABC management practices is… a turkey.

Taxpayers are actually funding these puerile games instead of programmes.

Considering her antecedents, can anyone say that they are surprised by this further gutting of their ABC?
Clickability now as validation for survival? If that comes to pass will it even be recognisable, let alone be worth saving?