News Corp has accused the ABC of waging a war on Christians. Media Watch, as ever, has entered the fray.

Today in Media Files, Media Watch has jumped into the debate on the ABC’s so-called “war on Christianity”, and the mass-withdrawal of ads from YouTube earlier this year didn’t hurt Google’s digital ad revenues at all.

Media Watch‘s take on ABC’s ‘war on Christianity’. The ABC’s Media Watch has weighed in on a debate over an ABC report about the prevalence of domestic violence perpetrated by Christian church-goers. News Corp and Sky News’ Andrew Bolt, as well as The Australian, have attacked the story as inaccurate and as misrepresenting US research that found men who sporadically attended evangelical churches were most likely to abuse their wives (and underplaying the flipside — that men who attend church regularly are least likely to offend). On last night’s Media Watch, host Paul Barry said the headlines the ABC had used had misrepresented the specific research, but that the investigation had been otherwise “compelling and worthwhile”, and said the ABC was not waging war on Christianity, as has been claimed.

Predictably, The Australian has already written up a report of Media Watch, with an unfortunate typo in its headline, pointed out by Barry on Twitter (since corrected): 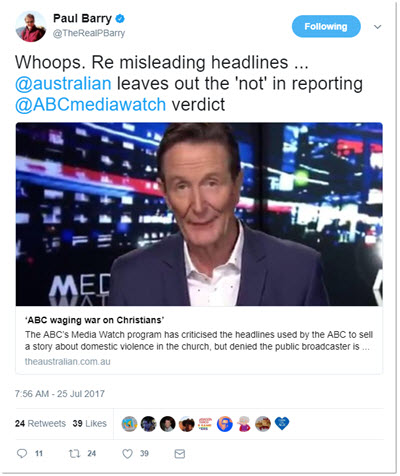 In response to the criticism, journalists Julia Baird and Hayley Gleeson have written a guide to understanding the various research they relied on for their reports.

The ABC responded to one of The Australian‘s stories last week by releasing its full statement to the paper, from which the Oz quoted just one line.

Programmatic ads spat didn’t hurt Google. For much of the past year, print media groups such as News Corp, the Daily Mail and The New York Times have been attacking Google (owned by the listed Alphabet) over the placement of ads on political extremist and porn websites, in particular on YouTube videos. This is done through programmatic ad exchanges, which computers do via algorithms. The reports prompted advertisers including Johnson & Johnson, AT&T, the UK government and The Guardian to pull their ads from Google. (Was this campaign a coincidence? Nope — both Google and Facebook are stealing the ad revenues of legacy media companies and the campaigns have been an attempt to try and limit that drain of money.)

But this morning in the US Alphabet produced its June quarter financial results, and guess what? The hypocritical campaign has had no impact. Google reported that paid clicks on ads rose 52% year-over-year (an advertiser pays only if a user clicks on the ad). The company said revenue was boosted by robust demand for advertising on mobile and on YouTube.

Google’s ad revenue, which accounts for a lion’s share of its business, rose 18.4% from the June quarter of 2016 to US$22.67 billion. For the first six months of this year Google’s ad revenues have totalled more than US$44 billion. That’s up 18.6%, which means the campaign hardly impacted. US group eMarketer expects Google to generate about US$73.75 billion in net digital ad revenue worldwide, up 17.8% on a year ago. If the current rate of growth continues Google will easily top that figure and go close to reaching US$90 billion. — Glenn Dyer

Headline of the day. A subeditor at Canada’s Toronto Star came up with the perfect reference to The Fresh Prince of Bel Air in this headline over the weekend: 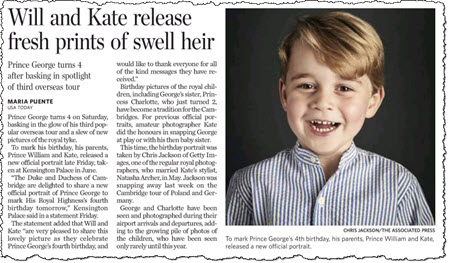 Legal battle could shut down Snopes. Fact-checking website Snopes has launched a crowdfunding campaign, saying a legal stoush could force the site to close down. The site has always relied on advertising revenue, but it says in its appeal that it’s been cut off from that income as a former contractor holds the site’s hosting “hostage”, “so we cannot modify the site, develop it, or — most crucially — place advertising on it. The vendor continues to insert their own ads and has been withholding the advertising revenue from us.” Snopes says it is unable to pay staff or cover legal fees (although the contractor in question, Proper Media, considers itself an owner, and said staff would be paid from advertising revenue). Snopes is known for myth-busting internet myths and urban legends, but in recent years has also turned its efforts to fact-checking in politics and other media reports.

Glenn Dyer’s TV ratings. Ninjas and chefs is not the name of an obscure Australian fusion cafe but refers to ratings success for Nine and Ten last night. They both claimed success — the Ninjas were top nationally in the metros and regions and the 7.30 to 9.10pm timeslot. Ten said MasterChef dominated the 7.30-10pm time slot — which it did. So win-win for Ten and Nine. Seven and the ABC were naturally left behind, and SBS, like me, was adrift because Le Tour had ended.

The Ninjas return for the last final tonight and then its on to The Block for Nine, Survivor and The Bachelor for Ten and Blue Murder and Hell’s Kitchen for Seven

I think I counted six channels that Masterchef was on where we live, no wonder there were so many people watching it. But not us, although they are corrupting our footy show with too many morons, then Four Corners which all of Australia should have watched.