The Lowy Institute has decided not to name its annual Media Lecture after Mark Colvin after all.

Today in Media Files, the Lowy Institute has backflipped on naming its media lecture after Mark Colvin, and Mark Latham’s return to Sky News.

Lowy Institute backs down on Colvin Lecture. The Lowy Institute has reversed its decision to name its annual media lecture after veteran journalist Mark Colvin. Colvin, the long-time presenter of the ABC’s PM program, died in April after years of chronic illness developed after covering the Rwandan genocide in 1994. The Lowy Institute announced it would name its annual Media Lecture after Colvin earlier this month, with this year’s speech to be delivered by climate sceptic Bret Stephens, drawing widespread criticism, including from Colvin’s wife, Michele McKenzie, on Twitter. But on Friday, the institute said the Media Lecture would not be referred to as the Mark Colvin Lecture.

“Mark had many friends and admirers at the Lowy Institute, and we wanted to pay him a lasting compliment. We would not have named this lecture after Mark without the strong support of Mark’s family as well as his executors. However, we have now been advised by Mark’s family that they have reconsidered their decision and no longer wish that Mark’s name be associated with this lecture series. We will, of course, respect their wish.”

Bret Stephens, a conservative columnist for The New York Times, writes on foreign affairs but has called climate change one of liberalism’s “imaginary enemies”. He will still deliver the lecture.

Latham’s return to Sky News. Mark Latham was unceremoniously dumped as a Sky News presenter in March after accusations of defamation from colleague Kristina Keneally, and, among other controversies, calling a teenage boy gay for his role in a high school video for International Women’s Day. Sky’s only comment at the time came from boss Angelos Frangopoulos on Twitter, but after a quiet month immediately after he was cut, Latham has been easing himself back onto the channel as a regular guest. He was dropped on March 29 and didn’t have any appearances on the program until early May, but he’s now appeared as a guest or for an interview eight times since — including four times last week.

A Sky News spokeswoman told Crikey that Latham’s appearances had been in his role as a member of the Liberal Democrats.

“They are not paid appearances. Mark Latham does not work for Sky News. There are no plans to rehire Mark Latham,” she said.

Latham was sent a legal letter last week by another Sky News presenter, Peter van Onselen, over a tweet in which Latham suggested van Onselen promised positive stories to sources who handed over off-the-record information.

Tour de … oh shit. Nine’s Sydney sports reader Erin Molan succumbed to one of the few hazards of newsreading on Saturday night when she fell off her chair while reading the sports headlines. She was off-camera when viewers heard a scuffle as she said, “The Tour de … oh, shit …” before recovering and continuing with the headlines. When she came back on-camera, she had a water stain on her blouse. 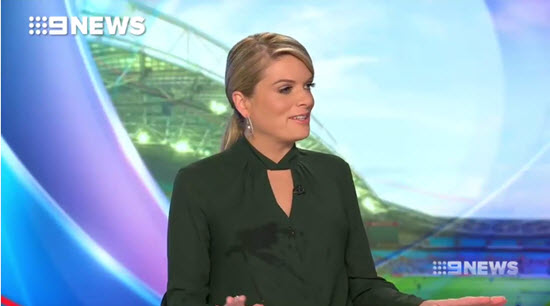 Molan apologised for the swearword on Instagram, and newsreader Peter Overton assured viewers in Sunday night’s bulletin that Molan was firmly anchored to her seat before handing over to her.

Forecast somewhat mixed. The production errors just keep coming at Fairfax. The Saturday Age‘s weather map was more than a little muddled, with cities and towns all over the place. 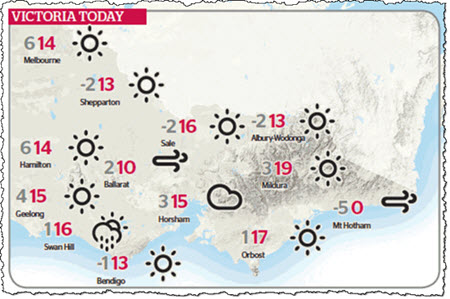 The mistakes follow a series of production mistakes in Fairfax papers over the past week or so, including two instances of The Sydney Morning Herald printing the same story twice in the same newspaper.

BBC women demand pay equality. Forty-two women have signed an open letter to their BBC boss after a huge gender pay gap was revealed when the UK’s public broadcaster published details of its staff’s biggest salaries. The letter, to director Tony Hall, acknowledges that the organisation said it would address the gender disparity by 2020, but calls on him to act now. “The BBC has known about the pay disparity for years … Beyond the list there are so many other areas — including production, engineering and support services and global, regional and local media — where a pay gap has languished for too long,” the letter says.

The broadcaster revealed its highest paid stars last week, revealing that two-thirds of its stars earning more than 150,000 pounds were men, and of the 34 stars receiving more than 250,000 pounds, only nine were women.

New York Times wants apology from Fox. The New York Times has requested an apology from Fox News over a story that caught the attention of US President Donald Trump’s attention, who claimed the newspaper was responsible for the escape of an Islamic State leader. Fox updated its online story, but the Times wants an on-air apology and a tweet. Fox aired a claim from General Tony Thomas, who said a report by the Times in 2015 had dried up a lead on an IS leader’s location. But the Times says the Pentagon had not objected to its article, and no official had ever complained about it. Trump has since tweeted about Fox’s story, and the Times says it has asked for clarification on the President’s tweet. 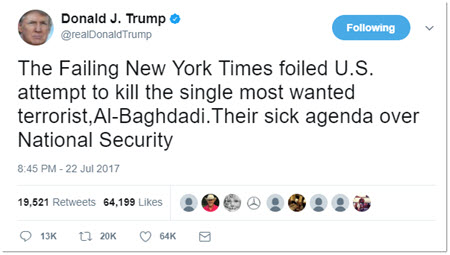 The Juice loose. And some parts of the US media have been just as measured about it as you’d expect.

Newspapers’ bright light. Amid all the gloom and dooming (most of it justified) about falling newspaper sales, falling revenues, and fake news, there are two bright lights in the world’s most competitive newspaper market, Britain. There, two of the world’s most successful papers are free. They are the Metro, a stablemate of the right-wing Daily Mail, and the London Evening Standard, which is owned by a consortium including the Daily Mail and General Trust with 24.9% and Russian oligarch Evgeny Lebedev with around 63%. Lebedev is a wealthy Russian businessman living in London and is a former KGB agent. His company also owned and closed The Independent, operates the “I” newspaper and The Independent website.

Metro sells more copies Monday to Friday than the Murdoch-owned Sun. It’s now the most widely read of all of the UK’s 24 daily and Sunday papers and produces more copies than it did a year ago. Only the paywalled and expensive Times has managed that, but its increase is a fraction of the near 10% seen for the Metro.

Metro recorded a 9.78% rise in sales for the year to June, while the London Evening News (now edited by former UK conservative Chancellor George Osborne) was down just 0.3%. The Times (owned by Rupert Murdoch) isn’t free and sits behind a high paywall and lifted its sales by 2.05% in the same period and was the most successful of the UK’s conventional dailies.

The Sun lost nearly 10.5% of its sales, while the Daily Mirror‘s sales plunged 16.8%. The Daily Mail sales slipped to 1.44 million copies a day, down nearly 7% over the year to June.

Interestingly, the Metro and The Standard were sort of neutral in the divisive Brexit debate in 2016 and the Metro was middle of the road in the UK election campaign in May and June of this year, whereas The Sun and the Daily Mail were stridently pro-Brexit and pro-Conservative. The Mirror was pro-remain and pro-Labour. The Evening Standard, came out for the Conservatives on the day before the June 8 poll. –– Glenn Dyer

Glenn Dyer’s TV ratings. Nine’s Ninja’s rule again, OK! — 2.461 million national viewers — 1.745 million in the metros and 716,000 in the regions. And that was the night. Nine rules the roost as a consequence and will do so again tonight and tomorrow thanks to the Ninjas. Nothing else mattered — MasterChef managed 1.286 million national viewers and deserves more for the second final tonight.

In the regions, Nine dominated with the Ninjas top with 716,000 viewers, then Seven News on 599,000, Nine/NBN News 6.30pm was third with 500,000 viewers, then Nine/NBN News with 467,000 and 60 Minutes with 461,000 in fifth spot. Insiders again dominated morning viewing with 526,000 viewers on the ABC’s main channel and ABC News — and with a discussion much higher in quality than what you get on Sky News in the evening (but not on the David Speers-hosted programs).

And remember on Friday we tipped that Nine would revamp The Footy Show after the Melbourne edition was easily beaten by The Front Bar on Seven. Nine moved as Crikey was being published — it will be back next week. — Read the rest on the Crikey website

The race-gap among BBC high-earners is easily as wide as the gender gap, with the highest-earning (white, male) star earning around as much as all the ten black and minority ethnic stars on the list combined. And yet, the race gap has received far less attention.
https://www.theguardian.com/media/2017/jul/19/bbc-salary-data-shows-huge-pay-gap-between-white-and-bme-stars

What sort of fidiots are they at the Lowy Institute that would think Colvin would have been happy with his name linked (as some sort of imprimatur) to that sort of knuckle-dragging logic?

Leigh Sales thought it was a great idea. Puhleeze!

Tonight she was “probing” and “grilling” (or was it grilling and probing?) Volker Türk on behalf of Dutton and the Limited News Party government to see why they were trying to embarrass her government – with these claims about a “perceived understanding” re these refugees on Manaus and Naru?
It’s not as though Dutton and this mob have any form when it comes to “misleading” us constituents is it – “deaths in custody”, “paedophile refugees rings-riots”, “tender processes” and the like – is it?

How can the Metro sales increase if it is free?

It is a puzzle, isn’t it? Perhaps a line dropped out and it refers to a digital paywall? But that doesn’t make sense as the Independent has a free site and, unlike the Standard/Metro, is worth reading if only for the incisive ME reporting of Robert Fisk, the only journalist who knows & tells what is happening in the brutalised region.

So Nine thinks it can revive “The Footy Show” whilst still retaining Sam Newman, the man who threw a hissy fit because he wasn’t allowed to dress as a woman. He is the reason I have moved to “The Front Bar”.