The Labor Party seems to have discovered there is inequality in this country. Is Bill Shorten really having a come-to-Jeremy conversion?

Opposition Leader Bill Shorten used a speech on Friday to the Melbourne Institute economic outlook conference to declare Labor’s commitment to eradicating the biggest threat to social cohesion and economic growth in Australia — inequality. The speech, according to Fairfax’s James Massola, “borrows from the populist message of progressive political leaders including Bernie Sanders in the US and Jeremy Corbyn in Britain”. But how does the Labor Party under Shorten (a member of Labor’s right faction) actually compare to Britain’s Labour Party under self-described socialist Jeremy Corbyn? Let’s look at some of the 10 core pledges British Labour made in the lead-up to the recent general election and how they compare to Labor’s newfound focus on inequality.

“We will build a progressive tax system so that wealth and the highest earners are fairly taxed, and shrink the gap between the highest and lowest paid. We will act to create a more equal society, boost the incomes of the poorest and close the gender pay gap”.

“If we’re going to fund vital investments for the future and keep the budget strong, we need to look at the old and growing faults in our tax system. The whole picture: revenue and expenditure, including tax subsidies. Including reforms that in the past we might have dismissed as too politically difficult.” Melbourne Institute speech, Friday July 21, 2017.

“We will build over a million new homes in five years, with at least half a million council homes, through our public investment strategy. We will end insecurity for private renters by introducing rent controls, secure tenancies and a charter of private tenants’ rights, and increase access to affordable home ownership.”

“Our plan will reform negative gearing and capital gains tax to make sure the housing market works for all Australians. These reforms are about putting some fairness back into the housing market, and making improvements to the Budget bottom line.

“These reforms are also good for our economy and will deliver $32.1 billion in savings which will help us to fund important reforms like Labor’s Your Child. Our Future, a plan to boost our schools for every child in every school across Australia.”

“We will give people stronger employment rights from day one in a job, end exploitative zero hours contracts, and create new sectoral collective bargaining rights.

“We will strengthen working people’s representation at work and the ability of trade unions to organise, so that working people have a real voice at work. And we will put the defence of social and employment rights, as well as action against undercutting of pay and conditions through the exploitation of migrant labour…”

“We will not stand by and allow the penalty rates of all Australians, millions of Australians, be put on the chopping block. We will do everything in our power, in the Parliament and in the courts, to remedy this bad decision (to cut penalty rates).”

“We will create a million good quality jobs across our regions and nations, and guarantee a decent job for all. By investing 500 billion pounds in infrastructure and industry, backed up by a publicly-owned National Investment Bank and regional banks, we will build a high skilled, high tech, low carbon economy to ensure that no one and no community is left behind.

“We will invest in the high speed broadband, energy, transport and homes that our country needs and allow good businesses to thrive, and support a new generation of co-operative enterprises.”

“We will build a new National Education Service, open to all throughout their lives. We will ensure there is universal childcare to give all children a good start in life, allowing greater sharing of caring responsibilities and removing barriers to women participating in the labour market. We will bring about the progressive restoration of free education for all; and guarantee quality apprenticeships and adult skills training.”

“That’s why, in 2017, my team and I have three major economic priorities: jobs, jobs and jobs.

“… the next phase of Labor’s Plan for Australian Jobs is about Skills, Training and Apprenticeships. These are our three fundamental principles:

1)  All Australians should have access to the skills and training they need for decent jobs that allow them to support their family – throughout their working life.

2)  All participants in the economy — government, business and unions — should share responsibility for designing a high quality and seamless tertiary and vocational education system – producing job-ready graduates and highly-skilled workers.

3)  Every dollar of taxpayer money should be directed to achieving the best student outcomes and the best employment opportunities — not wasting taxpayer money boosting private profits.

“…We are determined to use this time in opposition, as we should, to develop our plans … And preparing Australia to capitalise on the new jobs and new investment powered by renewables.” 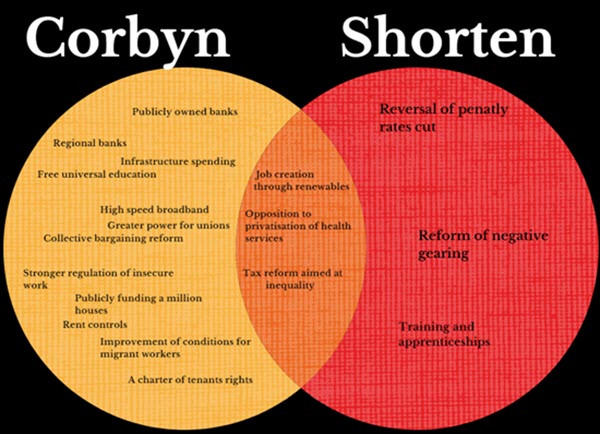 So Roger, California and Hawaii moving toward 100 % renewables won’t work because they won’t go nucular (to quote George Dubya?)

Simply rubbish. Renewables and heavy industry and not mutually incompatible. Renewables deliver far more than even a couple of hundred thousand Energizer Bunnies can, in case that was your concern.

John Newton – Leaders in those places may well be cynically promising the believers that they “are moving toward 100% renewables”, but technical experts will already have advised them that they can only move forward as long as they don’t actually get very far. So they call the process “reducing emissions”, not eliminating emissions.

Technical advice to governments including Australia and Denmark predict a theoretical maximum of 40% renewables. Jeremy Corbyn too, is well-advised. Even Angela Merkel has tried to warn her enthusiastic followers that they cannot move past 45%.

Dear Dodger’s nuke Tourette’s is always bursting out – he just can’t help himself.
The point about renewable energy is that it does not rely upon the “heavy industry” so beloved of the 19thC politicians still promising, like bumBoil’s “3 promises, jobs, jobs, jobs” in the previous article comparing Labor/Labour.
Manufacturing industry has been more or less abolished as an occupation in this country, now 7% of the workforce and falling (from over 25% only a generation ago so it was never all that big compared to UK,US or Europe of a bygone era) so the only hands-on jobs in the future, apart from the 3 ‘S’ (sex, security & senility services), will be in the creating, deployment and maintenance of home grown, small scale and infinitely variable renewable energy systems.

So that would be “no” then. Oh well. The fixed four year term thing was a hint.

Both of them sound like standard social democrats, it’s just that we haven’t had any of them around for quite a while (compare Gillard’s explicit rejection of the term).

And, while I don’t know whether Charlie writes the headlines, in what sense do detailed ten-point policies merit the description “thought bubble”?