In the last five years Australia has enjoyed a period of industrial relations peace that no one would have believed in the 1980s.

If you listened to the Coalition or Australian business, you might think Australia is struggling with the terrible threat of irresponsible, corrupt unions running amok, creating havoc for businesses and ruining the economy.

As everyone knows, that, of course, doesn’t quite measure up to the extended period of wage stagnation that Australian workers have endured, so bad that even the Treasurer doesn’t think it’s a good thing.

Nor does it stack up when it comes to actual industrial disputation — despite efforts to demonise ACTU secretary Sally McManus for her anodyne comments about breaking industrial laws.

Recent figures from the Australian Bureau of Statistics show how profound the change in industrial disputation in Australia has been even since the Howard years. The number of days lost to strikes per 1000 employees continues to drag along the literal bottom of the chart, with a fall in the March 2017 quarter to 2.4 days. The average in 2005 was 6.6 days; in 1995, nearly 20, in 1985, 55. 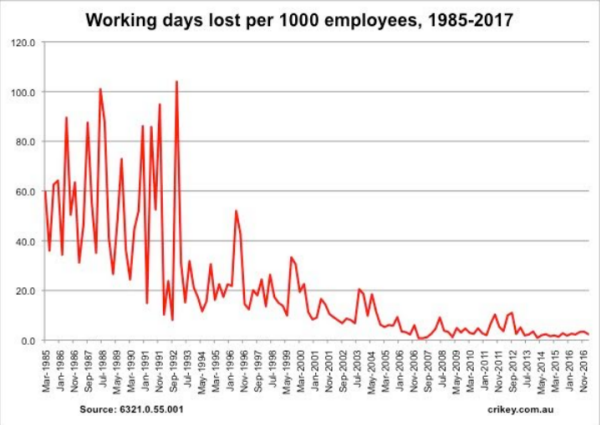 And while the government argues construction is the worst sector for industrial disputation, one that requires a special body to keep the CFMEU in line, disputes in construction fell to the lowest level in two years, down to 12.1. Instead, it’s the coal mining sector that had the worst record: disputes in the quarter account for nearly 50 days lost per 1000 employees, albeit down from the previous quarter, when it was over 100.

The radical fall in industrial disputation in recent decades hasn’t stopped businesses from complaining about aggressive unions. Indeed, one senior business lobbyist thinks things are much worse now than they used to be. James Pearson of the Australian Chamber of Commerce and Industry 12 months ago waxed nostalgic about the glorious times of the mid-1980s “when unions and business came together and worked collaboratively” in contrast to the current “adversarial approach of workplace relations in 21st century Australia.  Where proposals for reform are met with the cry of “WorkChoices”. It’s the bogey man used to strike fear in politicians and the public.”

In the March 1985 quarter, the time when Pearson thinks unions and business came together and worked collaboratively, 59.8 days per 1000 employees were lost to disputes. If he doesn’t like that, he might prefer mid-1988, when days lost exceeded 100 right across the entire economy. In the last five years, that figure has averaged 3.3 a quarter.

But that’s the problem with nostalgia — it’s never what it used to be.

The CFMEU was the only party in Queensland to object to mining health standards – that have eventually resulted in a rediscovery of black lung. All other parties were complicit. Even existing mine workers, discovering that they had black lung, did not want that know – to avoid being immediately sacked.

“Right, bruvvers! These cunts aren’t comin’ good on any of our demands – everybody fuckin’ OUT!”
James Pearson, ACCI, wants to bring THOSE days back. But in all fairness, he WAS the High Commissioner to Vanuatu then (and only entered the private sector in 2000), so “cargo cults” IS his background.

I too look back to the good old days, when unions could and did represent their workers, and could meet with business where both held some power rather than a major company negotiating with an individual who is desperate for work.

I am amazed how the younger generation don’t get the value of union membership to their wellbeing. We have so much continued rip offs like 7/11 staff , the garment industry, cleaning companies, backpackers etc. Government needs to take a more active role in ensuring that these ripoffs don’t continue & publicly shame the offenders.

They can’t, Liberals love the old master/servant paradigm with no pesky unions interfering. Then the benevolent (or not) master can dole out earned rewards (or not). Almost all good changes for the common herd have come from the unions and the Labor party.

There y’go again with that facty stuff – it is not relevant to this political ideology. If workers dropped dead from starvation they’d want to charge the bereaved for removing the corpses from the premises.