Turnbull is still as reliant on traditional media outlets as he is social media, despite a concerted push in his office to bypass them.

Prime Minister Malcolm Turnbull has recently increased his use of social media as a way to cut through to voters while the national media remains focused on bothersome leadership issues. But when it comes to big announcements, he still goes back to the old favourites.

Before his rise to the top job, Turnbull was always praised for “getting” social media. He would often engage in debates with politicians and members of the public on Twitter, but once he became PM, the weight of the job — or perhaps the advice of his staff — stifled his social media presence, and his channels took on the more watered-down style of a traditional politician: event photos, the occasional train selfie, announcements, etc.

In the run-up to the 2016 election, the PM, or his team rather, sought to play to the youth and got on Snapchat in addition to the usual Facebook and Twitter presence, but after July 2, 2016, his account lay relatively dormant. Since the budget — when it became clear that most of what he did would be framed by the media as mere foreground to escalating leadership tensions — Turnbull has been more active across all accounts, but still limited to the usual politician fare: overseas trips, local events and announcements.

In a post on Facebook in early July, Turnbull (incidentally referring to an interview on 3AW) said he wanted ” to cut through the media commentary, which is mostly about the game of politics, and speak to people whose concern, I believe, is about the outcome of politics — the policies that will make their lives better”.

Could this be the signal of a PM who will do all his big announcements through social media and spurn the media entirely? Could Twitter and Facebook become for Turnbull what talkback radio was for John Howard? There’s no sign of that yet. While Turnbull might talk about cutting through the media to speak directly to the public, it isn’t reflected in how he handles the big announcements.

The announcement of the new super agency of Home Affairs under Peter Dutton provides a perfect example of how the PM is tuning his message. The media alert went out to journalists at 10.58am for an 11.15am press conference in Parliament House. There was no tweet from Turnbull’s own account, but the recent Prime Minister Office account set up by the PM’s staff tweeted a link to the live video (awkwardly sideways at the beginning), along with a Facebook post and a snap that linked to the Facebook live stream. 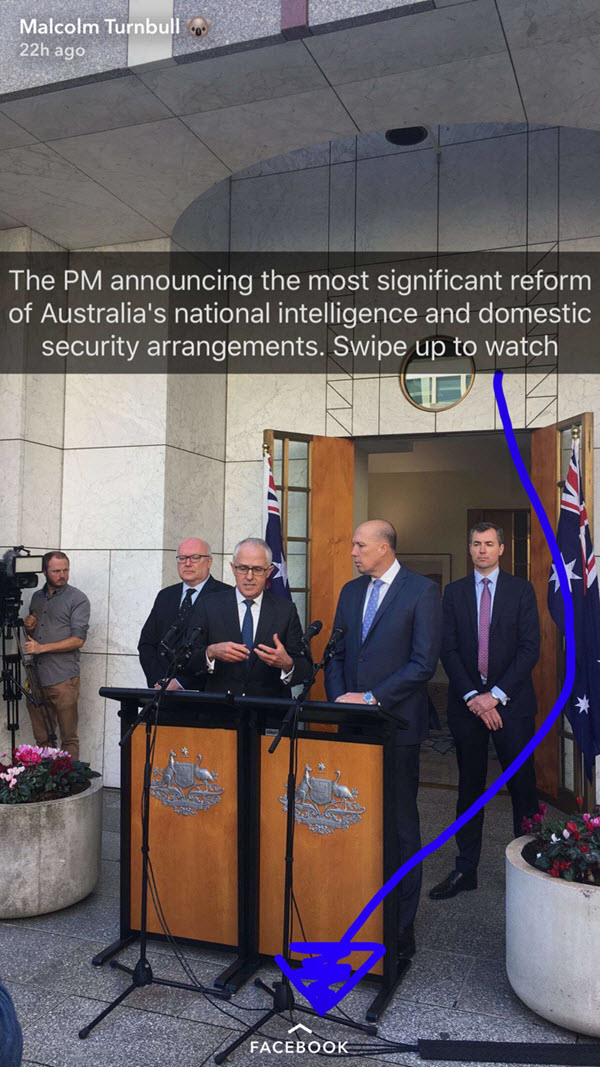 Just before 5pm, Turnbull tweeted a video summarising the announcement. A video of the announcement itself — along with links to the press release and an invitation to share it — was then posted on Facebook, but there was no actual engagement from the PM or his office online about the announcement. It was all broadcast and no “talkback”, so to speak. Since then, however, Turnbull has been like any other PM, doing the rounds on TV and radio to talk up the new super ministry. On Wednesday morning, Turnbull went on the following shows:

He rounded out the day of media with an appearance on The Project. Dutton, with all his brand-new powers and sway within the government, barely engaged on social media for the announcement, instead simply using it to announce his TV and radio interviews with Radio National, 7.30, 2GB and Sunrise across Tuesday night and Wednesday morning.

Not to miss out on the fun, former prime minister Tony Abbott popped up for his regular Wednesday slot on 2GB to criticise the new Home Affairs portfolio.