Some News Corp production staff were told midway through their shifts that they were surplus to requirements, and they have not been seen at Holt Street since.

Today in Media Files, more job cuts and changes at News Corp, the ABC and The Australian have gone in for another round, and where are the Australian Financial Review‘s letters to the editor?

News Corp cuts production desks. After cutting most of its photographers, the axe at News Corp Australia has moved across to the production desks. As News Corp begins a new model of production workflows, targeted employees were given their marching orders this week midway through shifts, and some have not been seen at Sydney’s Holt Street headquarters since. Unlike Fairfax’s recent round of redundancies, News Corp has not offered voluntary rounds, and a source tells Crikey many unprepared and nervous staff were left waiting for the tap in a funereal atmosphere. Some of those leaving had worked at News Corp for more than 20 years, and they were joined for impromptu farewells at nearby pubs, but there were notable absences from some Daily Telegraph department heads who stayed in the office.

A News Corp spokeswoman said there was “no set overarching nationally co-ordinated program affecting production”. “Any redundancies within production are a matter for individual editors and newsrooms, and based on their own needs and processes,” she said.

News Corp Australia announced in April it would cut photographers and production staff in a bid to cut costs.

Yesterday the company left out any mention of redundancies in an announcement concerning changes to publishing in NSW and the national editorial network. Daily Telegraph and Sunday Telegraph executive general manager Michael Wilkins has been appointed NSW managing director, with his responsibility now also including the NewsLocal community newspapers. Chief operating officer Damian Eales said the changes would mirror the model already operating in Victoria, Queensland and Adelaide, where the community papers are rolled in to the metropolitan operations.

John McGourty will be NewsLocal’s publisher, commercial and operations. Kathy Lipari will be executive editor, News 360 — a new model that editorial boss Campbell Reid said would be a “storytelling centre of excellence”. The statement said Lipari would be leading senior national and international correspondents and driving collaboration between News Corp companies to cross-promote each other (“great storytelling opportunities … across all publishing assets”).

Good feud guide. The ABC has gone in for another round with The Australian following the Oz‘s piece today criticising Julia Baird’s feature on domestic violence within Christianity. Ean Higgins’ page-three story today quotes church leaders unhappy with the ABC yarn that ran online and on 7.30, saying it was “selective” and “anti-Christian”. But the ABC is obviously peeved that only one quote from its lengthy statement made it in to the story, publishing its full statement and answers to questions on its website this morning.

According to the ABC’s statement, the questions Higgins asked were:

1. Why didn’t the ABC report the truth: that Christianity actually saves women from abuse?

2. Why did it instead falsely claim — and instantly believe — the falsehood that evangelical Christians are the worst abusers?

3. What does Ms Guthrie say to Bolt’s claim that “the ABC is not merely at war with Christianity. This proves something worse: it is attacking the faith that most makes people civil.”

Dear editor. For some time now, The Australian Financial Review hasn’t been printing its letters to the editor every day in its Monday-to-Friday editions. This week, letters to the editor have only appeared on Monday and today. But it’s not because its correspondents haven’t been writing in. Instead, editor-in-chief Michael Stutchbury told Crikey, it’s all down to pagination.

“It’s not because of any lack of letters … we love a good letters page. Sometimes with the amount of advertising, we need the letters page for other editorial. Technically, the book goes up in multiples of eight. So there has to be a strong case — (such as most commercial property Thursdays) to take the book from standard 40 pages to 48. On some days we can’t make the case to go to 48. But we still need the page for other editorial.”

Story of the day. The page 3 splash in today’s Courier-Mail is dedicated to a schnitzel as big as a baby. 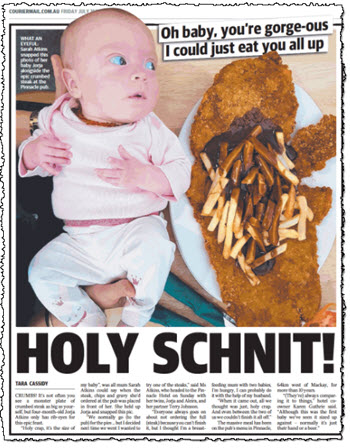 Glenn Dyer’s TV ratings. A night to endure and then hurry on into the weekend, secure in the knowledge that there is something, anything, better out there — the AFL, the Tour de France final stages, Australian Ninjas, the closing episode of MasterChef.  But there was one major event last night that could very well prompt a big shift in Australian TV.

Pulse throbbed for the ABC last night, but the 736,000 national viewers isn’t the best of figures for a new program. Under observation, and could go to ICU in the next couple of weeks. Common Sense on Ten — even accounting for the fact that it was on at 9.30pm after MasterChef and the Masterclass (which were oh so long) — was weak with 341,000. It is also a flop on Foxtel. It is not Gogglebox and won’t last past this series. It had 228,000 in the metros. The Tour de France had 241,000 — so it was fourth in its timeslot, finishing in front of the ABC’s Cleverman with just 200,000 national viewers. That is an appalling audience for such an expensive program.

But buried in Melbourne last night was a clash that could well change Thursday nights down in the deep south. For the past couple of weeks Seven has promoted The Front bar, a Thursday night AFL footy rant show airing from 10.30pm onwards. But Seven has promoted it to 8.30pm, head to head with Nine’s The Footy Show. The Front Bar narrowly won —  299,000  to 296,000 nationally. But in Melbourne it was a clear winner, 177,000 to 155,000 – that is the first time a rival AFL show has beaten The Footy Show on Nine for years, decades, perhaps the first time ever. No wonder Sam Newman sulked and was silent last night on The Footy Show (he probably was told to watch what he said after several recent atrocities). But if The Front Bar proves to be a reliable winner, watch Nine revamp The Footy Show next year and out will go Sam Newman and others. That small win by the Front Bar is perhaps the biggest event in Australian TV this year. Don’t underestimate the impact on Nine which has known the Footy Show ratings are tanking and needed a refresh. Now it is getting a reason to act.

The Front Bar, Have You Been Paying Attention, The Project — all Melbourne TV programs with a far different approach to what we have seen in popular light entertainment in recent years. The Front Bar actually recalls The Fat on the ABC, by far the best of its type I have seen. Seven ruined it when it poached then host Tony Squires. Pisstake TV, I call it – a very Australian format, so easy to do, so hard to get right. — Read the rest on the Crikey website

re The Courier-Mail’s page 3 story: the baby/schnitzel story rates as the most accurate scoop of the year. If only more of their reporting was of such high quality.

“The Great Australian Storybook Collection”?
I thought little Sarah had soiled her nappy/just more Limited News copy?
A lesson to all responsible parents, “This is what happens when you read our shit – even to your kids!”

I read Bolt’s article in the dead tree edition of the West and thought to myself that the man had some gall to fact check someone else.

Further to the Good feud guide – those women living in “domestic terror”?
Of course Baird’s piece dimmed the halo off their “Our Christianity” – made it look less than perfect – the reality/manifestations of individuals misinterpreting the scriptures to suit their ends? …. We all know how imperfect Islam is …..?
Made that “difference” that little less.

Ironically the first episode in the Baird series was about domestic violence in Muslim communities. I thought she had misconstrued some of the texts she quoted, but when I raised this I was soon shouted down by Muslim women who defended the piece as reflecting their personal and professional experiences. Try arguing with a collection of Muslim family lawyers, paediatricians and social workers!

Baird used the whole of The Drum tonight to further this conversation, I would like to see the last of her on this show which I thought ways supposed to be about politics, not that of religion.
On football show ratings, where does our preferred Marngrook come into the scheme of things?

Whatever the flavour/brand, why would anyone who claims to believe in a Great Flying Spaghetti Monster be thought to act rationally or reasonable in any walk of life?
Bugger freedom of religion, let’s have freedom FROM religion.