Morrison outsmarts Turnbull. Are interest rates going up or down? If you’re a politician — a smart politician — you know that’s a trick question. And yesterday Scott Morrison showed he was smarter than his Prime Minister.

Turnbull got plenty of coverage for his statement, reflecting the discussion over the Reserve Bank’s “neutral rate”, that “rates are more likely to go up than down, clearly”, at a conference and also talking to Neil Mitchell, who belaboured the PM about the possibility that people might struggle to meet their mortgage commitments if rates rose.

A brave politician would have replied something along the lines “if you’re going to struggle to repay your mortgage when the Reserve Bank has set the cash rate a little above its current emergency low setting, then you should never have asked for a loan in the first place”. Even a 100-point increase in the cash rate would still leave Australian interest rates far below the levels that most of us who had mortgages in the 1980s, 1990s and 2000s up until the financial crisis faced.

But a smart politician would have declined to speculate on what is a matter for the independent central bank. The Treasurer got it right; later in the day he told 3AW: “People should not be reading too much into this”. “These natural rates are the sorts of thing that are discussed at the edge of the blanket at the economist picnic. I wouldn’t take that as a signal about where rates are heading. That’s not what they’re intended to be suggesting.”

But Turnbull outlasts hungry journos. Today’s newspapers are full of headlines about Prime Minister Malcolm Turnbull’s remarks on free trade and interest rates at yesterday’s The Australian and University of Melbourne sponsored powwow, but we’re lucky the journos even got into the room to hear Mr Harbourside Mansion speak. While Turnbull was the keynote speaker at a fancy lunch for the powerful folks with time to spend a day listening to pollies have a chinwag about the economy, the actual journos covering the event were barred from entering (and having a feed of their own) while Turnbull was sat down to his meal, only ushered in to stand around awkwardly when the speech had already started. Ms Tips’ man at the scene was under the impression this directive came from the Prime Minister’s Office. Is Prime Minister Malcolm Turnbull a bit squeamish about having a camera around while he’s having a spot of lunch? Most MPs (including Turnbull) have lived through lunches at the National Press Club just fine. Our spy also noted that it wasn’t all journos who were barred from the room and subjected to a cold lunch when the show was over — scribes from sponsors the Oz were in the room the whole time.

Compare the pair. Readers of Melbourne’s Herald Sun would have been surprised to see the outraged reaction from Insiders host Barrie Cassidy to a story on the salaries of ABC staffers by press gallery newbie Tom Minear this morning. The story came from a question from One Nation’s Pauline Hanson to the ABC in Senate estimates, and showed that the top 20 stars at Aunty earn more than $225,000 (which is peanuts for on-air commercial talent).

“You should have phone me before singling me out on salaries. Pathetic juvenile journalism FYI I’m not in the top 20,” Cassidy tweeted at Minear, although Ms Tips feels the correct verb would be “thundered”. The copy in the world’s most liveable city seemed pretty benign: 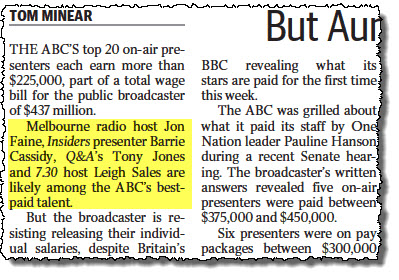 Readers of Sydney’s Daily Tele would have been less surprised. The same story called Cassidy a “fringe-panel show host” who is “taking home the big bickies without a profile to match [his] pay packet”. For the hard-hitting host of Insiders, who gets information out of his political guests that can change the news cycle in a sentence, the reaction seems entirely justified. Insiders regularly out-rates its rivals, and its segments going viral around the world is not uncommon. 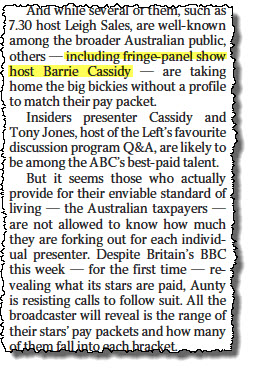 Who would change the copy? Was it a subeditor who thought the story needed Sydney flavour? The Herald Sun version looks closer to the original copy — Minear was based in the Spring Street gallery before making the move to the nation’s capital. Of course, Cassidy worked out the change had been made after the copy had been submitted. He tweeted: “herald sun copy was rewritten under his byline by somebody else at the Tele. I’ll buy him a beer — when I hit the top 20.” Sounds like it should be someone at the Tele buying him a beer.

Who is talking to Jones? The push to democratise the NSW Liberal Party will come to a head at the party conference this weekend, with Tony Abbott and his Warringah motion to use plebiscites as part of preselections to be debated. The motion is so named because it comes from the Warringah Federal Electorate Conference and is closely connected to Abbott, the member for Warringah.

While it’s well known that conservatives turn to Jones for a cushy chat (except for Gladys Berejiklian, whose interview was more like barbed wire on a cactus), a leak from the Liberals to The Australian Financial Review earlier this year showed that getting air time on his show was seen as a strategy to swing votes in favour of Tony Abbott in his local seat at the last election:

“It would be good if Ray Hadley and Alan Jones could deliver a strong message about Warringah being under threat and perhaps do a job on [Nick] Xenophon and [independent candidate James] Mathison. Mathison’s tweets and blogs will include some material that might concern voters about him,” a memo leaked to Phillip Coorey said.

So who’s been on Jones this week? Why, that would be Jim Molan, the retired major general and preselection candidate who is close to Abbott, and monarchist David Flint — both chatting on the necessity of reform within the Liberals. A tried and true strategy, how will the weekend play out?

Tips and rumours: Turnbull catches the same pleb trams as the rest of us

Surely ‘fringe-panel show host’ is a more apt description for Andrew Bolt whose programme only scores a small fraction of the viewing audience compared to Cassidy’s ‘Insiders’.

Yeah, gotta lurve the reflexive jibes built into the mudorc house style – how was it they used to describe Crikey, something like “gossip newsletter”?

Putting Bolt’s show on the fringe is overstating its visibility, surely.

The Macquarie network is building up quite a troupe (or should that be troop as in macaques, or baboons in the Abbottrocity’s case?) of RWNJs, headbangers and crazies who are so regularly featured by the shoutjocks that their ravings deserve a section in Crikey.
Molan & Tastie would be just the sort to head a Bishops Generals junta (TM grundle) with Dame Flint as Marie-Antoinette and Abbottrocious as a brain-dead Richelieu.
One benefit for readers would be no need to subject oneself to the full shower of shite but it would need a very brave, not to say superhuman, intern who could withstand the brain deadening & ethically corrosive crap for more than a day or two.
But hey, isn’t that what interns are for – burn them up and spit ’em out?