Mark Latham has pushed his former Sky colleague Peter van Onselen a bit too far, and PVO has responded with a legal threat.

Today in Media Files, Mark Latham receives another legal threat from a Sky News presenter, The Advertiser cuts another of News Corp’s columnists, and the BBC’s highest-paid stars have been revealed.

Good feud guide. Sky News presenter Peter van Onselen has sent his former colleague Mark Latham a legal letter over a tweet in which Latham claimed van Onselen promised positive stories to sources who gave him off-the-record information. The tweet was in response to a tweet by van Onselen comparing Latham’s Twitter feed to Joseph Conrad’s Heart of Darkness. 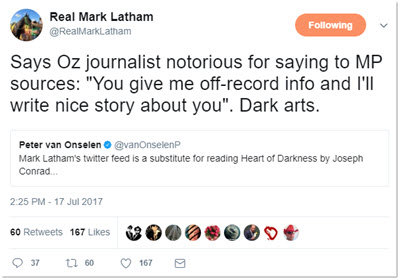 Latham, of course, provided an update on the feud via social media when he tweeted yesterday he had “received letter from van Onselen lawyers about this. He has a go at me ‘Heart of Darkness’, I respond and now snowflake does lawfare”. In another tweet, he said he would “welcome a court case” with van Onselen.

Latham was sacked as host of his Outsiders program in March after a quick succession of defamatory attacks on fellow Sky News presenter Kristina Keneally, on the ABC’s Wendy Harmer, and on a 15-year-old girl and a teenage boy. But that hasn’t stopped him appearing as a guest. Latham will appear on Andrew Bolt’s show this evening, and since he was sacked has continued to be a regular guest.

Advertiser columnist cut. Long-time columnist for The Advertiser Petra Starke is another victim of News Corp’s most recent round of cost-cutting. Starke announced the cut on Facebook, saying she had been “let go” in the latest round of cuts:

“I’ll miss getting angry emails and Facebook messages from people defending golliwogs and Grid Girls, and abusing me for supporting the lefto-pinko-feminazi-PC-queer agenda to brainwash our school children and turn Australia’s men gay.” 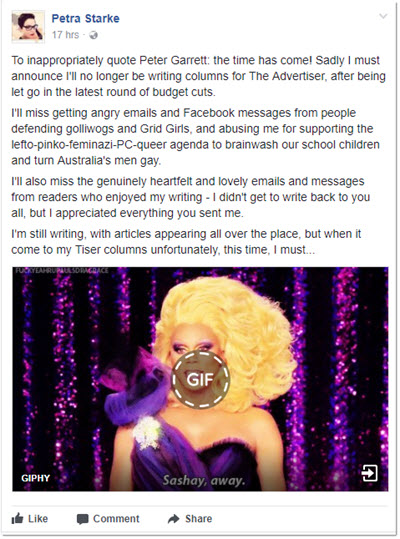 News Corp Australia announced a round of redundancies focusing on its photographers and production desks in April in an attempt to cut costs.

Highest-paid BBC stars revealed. The BBC has revealed its highest-paid stars, with new Top Gear host Chris Evans topping the list with a salary of between 2.2 million and 2.25 million pounds last year. According to the figures, revealed in the BBC’s annual report, two-thirds of its stars earning more than 150,000 pounds are men, and 25 men receive more than 250,000 pounds, compared to nine women.

It’s the first time the BBC has revealed the pay of its stars, which it now has to do under a new royal charter. Director General Tony Hall said the BBC recognised there was “more to do” on gender and diversity.

Glenn Dyer TV ratings. On a mixed night, MasterChef Australia did well for Ten — 1.33 million national viewers — but next year chaps, get rid of the complicated desserts and high-sugar rubbish and go for something a bit plainer (less fussy) that ordinary home cooks can aspire to. The first winner, Julie Goodwin, is still what the program should be aiming for. Offspring, also on Ten, averaged 892,000 national viewers which was solid.

But the gong for the night goes to Utopia on the ABC — it was in the top 10 nationally with 1.12 million national viewers — which easily topped Offspring from 9pm. That was after Shaun and his Mad As Hell gang averaged a very tasty 1.03 million at 8.30pm, meaning it too beat Offspring. In fact the ABC won that hour. Geewillikers Batman, there’s a message there for the commercial networks about making funny comedy/satire programs and doing it well, isn’t there?

Mad Marky has at least two regular slots on Macquarie each week, with Jones and Fordham as well as with the other shouters whenever he’s jumped another school of sharks on some issue.
He’s a perpetual pout machine.