Fifield yuks it up ... IPA claims Eureka Stockade ... what does Christensen make of the new Doctor? ...

Fifield addresses NBN’s coffee addiction. Communications Minister Mitch Fifield has rounded on the NBN in a humorous speech to the telecommunications industry last night. In a nod to Prime Minister Malcolm Turnbull’s Donald Trump impression at the Midwinter Ball, Fifield acknowledged that the speech could be leaked, but he would still do his best to continue the tradition of a roast with the ACOMM Awards address.

In reference to the $437,000 spent by NBN Co on coffee machines, Fifield also announced the Telecommunications Act amendment “Pay for Your Own Coffee, Bill, Bill 2017”. NBN Co’s CEO is Bill Morrow. Fifield said all coffee machines would be removed from the offices and there would be two components to coffee pricing:

Staff would no longer be able to buy coffee from the cafe, and the charges would be regulated by the ACCC, Fifield joked.

“Before anyone accuses the government of introducing new regulations just to support the business model of one provider, it must be remembered that NBN Co’s unsustainable coffee costs are all a result of the gold-plated coffee machines installed by the NBN under the previous Labor government.”

Labor’s Michelle Rowland and Ed Husic also attended the awards, but Fifield said Greens communications spokesman Scott Ludlam was an apology (probably because of his resignation).

Rewriting history. Is the history of the Eureka Stockade about to become another front in Australia’s culture wars? The Institute of Public Affairs has released research saying that the trade union movement shouldn’t claim the uprising in the Ballarat goldfields as part of their history, as it was really about individual workers wanting lower taxes — more like Australia’s own Boston Tea Party (and we know how claiming the history of that has gone in the US). In a release today about the video “Australia’s Own Tea Party Revolution” the IPA’s Dr Bella d’Abrera says: “The battle that won Australians the right to vote was a revolt against higher taxes”. We wait to see if it catches on.

Hello, sweetie. The internet reacted with a mixture of elation and fury this week to the news that the new Doctor Who would be played by Jodie Whittaker. One of the most famous fans of the British time-travelling series is Queensland LNP MP George Christensen, who has even campaigned to have episodes of the show filmed in Australia. We wanted to get Christensen’s view on Whittaker’s selection, as it is well known that all Whovians have strong opinions on their favourite Doctors. Christensen’s staff told us he didn’t have time to give us his assessment as he is travelling and dealing with more pressing matters. All we have to go on is this Pinterest-worthy tweet: “Time will tell. It always does.” 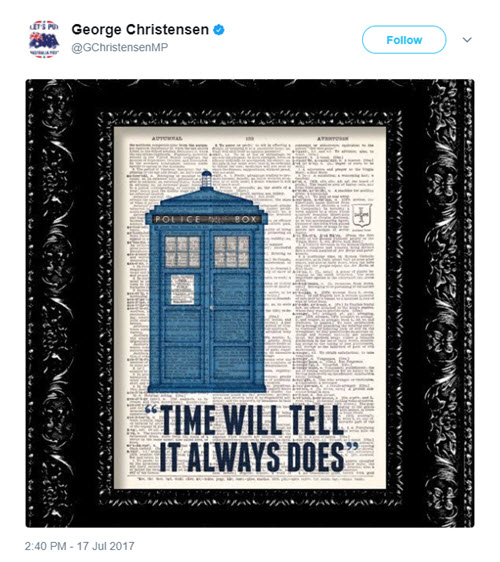 Coal is dead (well, deader than it already is). Brace yourselves, Malcolm Turnbull, Barnaby Joyce, Tony Abbott and Matt Canavan: someone is going to say something really negative about coal. Rail Group CSX, one of America’s biggest carriers of coal, reported its second-quarter profit overnight Wednesday, and its high-profile CEO Hunter Harrison says fossil fuels have no future. So certain of this was he, that he told analysts CSX will not buy another rail locomotive to pull coal trains.

“Fossil fuels are dead,” Harrison said. “That’s a long-term view. It’s not going to happen overnight. It’s not going to be in two or three years. But it’s going away, in my view.” He’s not saying CSX will not stop carrying coal, but it won’t be investing in the business from now on. In the US context, it’s not great news for US President Donald Trump, who in his Make America Great campaign promised to put “an end to the war on coal”. The White House is attempting to revive the American coal industry by dropping environmental regulations and abandoning the Paris climate agreement. Big business isn’t listening, even those making money out of coal.

If marriage equality doesn’t wreck the government, NBN or Murray-Darling disasters might

You, yes YOU, own the NBN, so demand a higher goddamn standard

Good luck convincing Canavan (or any of those others for that matter) of that – Q&A the other night “the point” was always his interpretation of it (while Jones indulged him – “Iraq” was a classic).

“Fossil fuels are dead,” Harrison said. Brace yourself, Crikey! He didn’t say that coal is dead. He is saying that coal-oil-and-gas are dead. We are going to have to think of other ways to keep our locomotives on the rails, our planes in the air, our ships at sea, and our windmills turning when the wind don’t blow. We have just got to stop pretending with token reductions, we must eliminate all release of fossil carbon.

Now Crikey, do you want us to believe that what the greenhouse is suffering from is an excess of coal dioxide?

COAL IS DEAD??
Currently about 80% of our energy is delivered by coal. South Australia is putting in a 150 MWhr battery with a power capacity of 100 MW. The price of this of course is a closely guarded secret. “Commercial In Confidence”. Musk couldn’t resist the opportunity for hubris and let the cat out of the bag. He said if he lost the race to get the installation complete in time it would cost “him” $50 million. Now Musk wouldn’t be thinking Aussie dollars here. He would be talking green-backs. So the whole battery installation would be costing at least A$67 million. With his mark-up, installation costs etc, I doubt there would be much change out of $100 million which makes the battery farm work out at about $1,000 per kWHr for something that will produce this amount of power for about an hour and a half if fully charged. Of course this is a somewhat naive way of looking at this project until you understand that it will be operating in system of 6,000 MW plus over a continuous time period.

If someone can explain to me where the money is coming from the pay for the renewables and batteries to replace the 80% of the power produced by coal then I might believe that coal is finished. I wish coal was finished, but wishful thinking and hubris will not provide the electricity essential for a modern society.

Loy Yang B is on the chopping block for to get Owners No 6. They will pay at least $1000 million, it’s worth a bit more. This works out at $1,500 per kWHr, more than Musk’s batteries. Difference is that LYB operates 95 percent of the time. It doesn’t go flat after an hour or so.

I reckon that a lot of the energy that charges South Australian batteries will come from good ol’ low cost coal. probably from Loy Yang B.

Much as it pains me to agree with the IPA on anything, they are correct about the Eureka Stockade. It was indeed a small-business revolt against taxation, and quite analogous to the Boston Tea Party.

I am waiting for the outcry from all the rent seekers with their stranded assets & sunk costs wailing for bail-outs when this country finally grows up and realises that the 21stC is getting on for 20% done and we are still fart-arsing about with deleterious centuries old technology.
Nothing wrong with centuries old technology per se – can’t beat a good wind or water mill – it’s the deleterious stuff with by products & waste that was once dumped onto the social costs whilst the profits were private.
Little things like clean air, water, soil, food and such ephemera which the rich, apparently, don’t need.
Even BK’s Train to Nowhere could be powered by stand alone solar cells owned by the communities through which it passes, carrying their produce & peoples, whilst the megashitties on the coast choke on their own effluvia.
Can’t wait, personally. Meanwhile for the Crikey bookclub, I recommend a much neglected classic, censored during WWII, by the Eldershaw Barnett (sic!) “Tomorrow and Tomorrow and Tomorrow”