It’s hard to believe that Ludlam would become the third non-senator to be forced to fall on his rusty sword this 45th Parliament. But I shall not be the fourth, writes Senator Derryn Hinch.

If it was politically surreal to watch Scott Ludlam call a presser in Perth on Friday to announce his resignation from the Senate because he held dual citizenship, how the hell do you categorise Larissa Waters following suit a few days later?

For Ludlam, there were almost inconsequential throwaway lines, as — in 24-carat Greenie fashion — he revealed that, aw shucks, sorry folks, I’ve never really been a senator. Dual citizenship with Kiwiland and all that. Bloody section 44.

It’s hard to believe that Ludlam — he of the neat hair, colourful socks and expensive shoes — would become the third non-senator to be forced to fall on his rusty sword this 45th Parliament. He joined One Nation’s Rod Culleton — whom I warned on Twitter before the July 2 election would not pass muster — and Family First’s Bob Day.

(“Senator” Ludlam’s public mockery of Day’s technical sloppiness will no doubt be framed by somebody.)

And now Queensland Green (and, like Ludlam, a Greens Deputy Leader in the Senate) Larissa Waters has been forced, for passport reasons, to pull the plug.

Around the Ludlam exit the rumours swirled about other foreign-born members and senators. Waters (born in Canada) another Green, Peter Whish-Wilson (born in Singapore), PHON’s Malcolm Roberts (born in India), Hinch (born across the ditch) Labor’s Sam Dastyari (born in Iran) and the Libs’ Eric Abetz (born in Germany).

And there were serious doubts about Bob Day’s replacement, Kenyan-born Lucy Gichuhi. Did her failure to re-apply for Kenyan citizenship constitute a renunciation after arriving here in 1999? 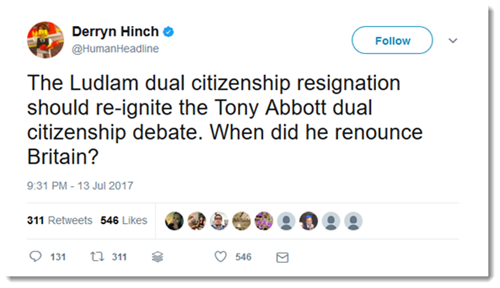 I had raised that issue in my opening editorial on the first Hinch Live Sunday night current affairs program on Sky News in 2015.

Others, like a Queensland terrier named Tony Magrathea, had been chasing an Abbott answer for years, and he’d enlisted Labor’s Terri Butler.

Suspicions were further fuelled by the fact that Abbott wouldn’t respond to FOI requests, the PM’s office said documents were not available, and then the files were sealed.

I did email the dogged Magrathea and point out that, in my experience in current affairs, most conspiracies turned out to be fuck-ups.

The Ludlam mess prompted former PM Abbott to answer the “rumour mongers” last week by tweeting a copy of a letter from the Poms showing he had renounced his British citizenship in 1993.

(And that prompted questions about how he could get a foreign student’s scholarship to Oxford as an Australian in the 1980s while holding a British passport.)

The Ludlam mess raises more questions than he has answered. There was a change.org petition circulated three years ago demanding the Greens Deputy Leader answer the dual citizenship question. Why did that not at least set off some alarm bells?

It again raises the sloppy issue about ineligible candidates. I believe all would-be politicians who were born overseas should be compelled to provide documented proof of the dual citizenship renunciation to the AEC at the same time as their nomination form and fee. And why haven’t their parties, large and small, policed it? I heard Greens Leader Senator Richard Di Natale saying this week they were having a “root and branch” review of what should have been bleeding obvious.

I must admit I did tweet: “And now Senator Waters. Seems Greens should have spent less time hugging trees and more time crossing Ts.”

As it turns out, Scott Ludlam’s exposure as a sham senator could be the result of collateral damage. The Perth barrister who lumbered him was a constitution buff who actually had another ex-Kiwi in his sights: me.

According to The Weekend Australian, John Cameron — a lawyer, not a political junkie — applied to the archives across the ditch for info on several senators.

“I checked about three weeks ago with the NZ Department of Internal Affairs and applied to search the register in relation to Mr Ludlam and Senator Hinch. I expected the human headline may not have done it and Mr Ludlam would have done it, but it was the other way around. I received the certificate for Mr Ludlam which showed he was still a citizen but for Mr Hinch the certificate shows that he renounced his citizenship before the last election.” (Ed: For proof, it is reproduced below). 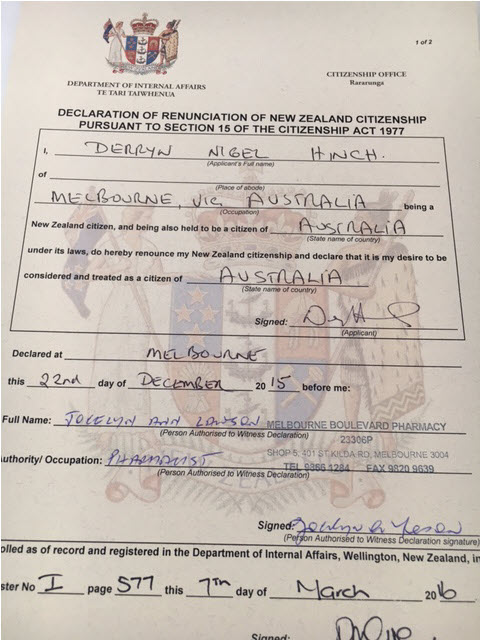 Postscript: The luckiest man in all this is that conservative stickler for rules and regulations, Senator Eric Abetz. Stickler, apparently, except maybe when they apply to him.

Abetz held dual citizenships until he renounced his German citizenship. One report claimed this week that was on March 9, 2010.

That would mean he was an illegal senator when elected in 1994, 1998 and 2004. But Jennifer Bechwati from Sky News tweeted that Abetz renounced his German citizenship in 1974.

Tasmanian art dealer John Hawkins, who has just dropped a High Court challenge to Abetz’s eligibility, might want to look at it again.

There’ll be no Hinch Senate Diary next week. I’m off O/S “on assignment” as we used to say on Sunday Night — before I jumped the shark.

Is Peter Dutton ineligible to sit in parliament?

Is a pharmacist a competent witness for a New Zealand statutory declaration? Section 11 of the Oaths and Declarations Act NZ suggests not.

lykurgus
Reply to  The diving swan

Since the dates rather conveniently coincide with registration, and considering his eagerness to use Sky News as a source to exonerate Eric Abetz, you’re right to be suspicious.

I believe that most pharmacists are JPs.

Is there a subscription option where you don’t get pointed to sel-indulgent waffle from Derryn?

sn’t changed! FO both Crikey and him.

Hopefully alongside an option to unsubscribe from pontificating commenters who are never happy unless Crikey is 100% in line with their narrow proclivities.

Really Crikey? I mean REALLY?
You think this tosh is worth leading with?

My money was on Mortimer

The sensational ‘Nigel’ revelation almost made this piece worth publishing. But not quite.

Sometimes Derryn Hinch has something useful to say. This isn’t one of those times.

Instead of his smart alec comments and tweets putting Ludlam and Waters down, he might have done better to reflect on the nature of the absurd section of the constitution that brought this about. Being a citizen of another country as well as this one, is no indication of one’s loyalty. Does anyone really believe Ludlam – or anyone else – would sit in parliament and vote to the detriment of Australia in favour of New Zealand. Our minds should be much more exercised by the commercial and financial connections of our politicians when it comes to assessing their loyalty and their impartiality in making decisions of state or national importance. It’s a great pity that our atavistic constitution simply doesn’t have its priorities right.

And where is Derryn’s compassion for circumstances in which neither Ludlam nor Waters had any reason to believe they had a problem. Both came out here when they were babies. Waters’ parents are Australian and she was only born overseas because her parents were working there. Why would she have begun to think she had a problem? It’s easy to say she should have. But if there’s no room for the application of common sense – and there is sufficient case law to suggest there is – then the law truly is an ass. Derryn, of all people, should understand that. He did time in stir because he believed the law provided too much cover for paedophiles.

And what of Ludlam’s and Waters’ utter integrity in choosing not to fight this in the High Court in order not to be seen as trying to game the system. By all accounts, there’s every chance they’d have been successful but they chose to show leadership and principle to their own personal detriment.

Being too clever by half adds nothing to political and social discourse. Derryn might like to reflect on that occassionally.

Hinch gets off on this kind of triumphalism, and it ain’t the reason I subscribed.

Can’t speak for anyone else, but I’m letting my sub lapse.

Many of us regularly question Crikey’s decision to hire Hinch and have pleaded for his removal.Similar shitful spiels are available for free elsewhere, I didn’t subscribe to read the rantings of a failed shock-jock and may well let my sub lapse too, enough already Crikey.

I am surprised Derryn gets a Guernsey on Crikey – it’s disappointing to see them use the closest thing to a shock jock – but I’d never let my sub lapse over it. I still think it’s one of the more useful journals in Australian political publishing.

Absolutely. This law is outdated and inappropriate in the 21st century. Renouncing citizenship does not mean renouncing loyalty anyway. But the Larissa Waters’ case shows how totally ridiculous this law is in the modern world. NZ and Canada are hardly on the list of the “not like us” so popular with the right.

You may care to reflect a little more on your opening comment.
In just the past few weeks, we have had several articles in the MSM stating that the Chinese are known to recruit Australian/Chinese residents/citizens/students for spying purposes. Do you think it okay if one or more of these ‘spies’…with dual citizenship…is elected to the federal parliament?
If we were only talking here about UK, Canada or New Zealand dual Oz citizens, things might be different…but how can you discriminate in favour of ‘some’ dual citizens, and not others? I think that would be a very bad idea.
The Chinese example is just that…there are many other countries I would not want one of my representatives sharing citizenship with…North Korea for one!!
It would seem that those who were responsible for inserting Section 44 (i) into the Constitution of Australia did so for good reasons.

Will
Reply to  CML

What does it matter of you’re a Chinese dual citizen spy or a bought-and-paid-for Chinese lackey like Sam Dastyari?

CML
Reply to  Will

That is a ridiculous and offensive comment…Sam Dastiyari has already admitted, and been punished for, his action in having a $5,000 bill paid for by a Chinese business man.
I notice you didn’t mention ANY member of the Liberal Party who has benefitted to the tune of hundreds of thousands of dollars from similar Chinese business persons?????

Will
Reply to  Will

Oh, I’m sure the Liberals are in it for far, far more. And Dastyari too. And it’ll be millions, when all the property deals are added up. My point is non-partisan. It’s that citizenship is no protection against corruption, foreign or domestic.

Well said. Which countries are friendly and which could be a problem will change over time. The constitution can’t pick and choose among countries it’s acceptable to be a dual citizen of.

Agreed. Dual citizenship bars you from holding political office in Australia but a Brit can dismiss our government.