There 's no evidence that Foxtel and the government corresponded over $30 million to broadcast women's sport.

Today in Media Files, a freedom of information request shows the Communications Department hasn’t put any conditions on $30 million handed to Foxtel to broadcast women’s and niche sport, and an ad featuring Delta Goodrem has been ruled a bad influence.

No conditions on Foxtel sports cash. Foxtel and the Communications Department did not correspond at all about a $30 million budget handout to broadcast women’s and niche sport, according to a freedom of information request submitted by ABC Melbourne. The FOI requested correspondence between the department and the broadcaster about the budget measure, but it could not be fulfilled because the documents did not exist. The funds were allocated over four years from 2017-18 in the May federal budget to “support the broadcast of underrepresented sports on subscription television”. But without any correspondence, (such as a payment schedule, a list of possible sports, the business case from Foxtel, documentation from the department of KPIs to make sure the money is well spent), it just looks like a fat paycheck without any conditions for Foxtel (which is half-owned by Telstra and News Corp, who don’t need a free feed from Canberra, do they)?

Could it have been a way for the federal government to make sure Foxtel got something when the commercial TV and radio broadcasters were promised abolition of their licence fees in the media law changes that didn’t make it through Parliament? Foxtel doesn’t pay licence fees, but it moaned and groaned about missing out when the abolition of the fees was being discussed earlier this year. — with Glenn Dyer

Delta ad bad influence for road safety. The Advertising Standards Board has ruled an Apple Music ad featuring pop singer Delta Goodrem in a vintage car, dancing and singing in the passenger seat with her arms and head out the window breached the advertising code because she is not wearing a seatbelt. Apple said Goodrem and the driver were wearing lap belts, but the board found that because the belts aren’t visible, the implication to younger viewers might be that she was not wearing one at all.

Apple said it was disappointed with the decision, but it would edit the ads, Mumbrella reports. 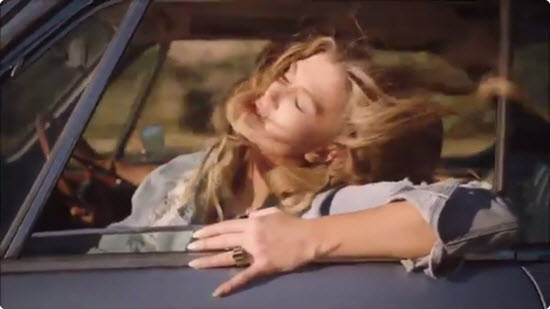 The Sunday Telegraph reported earlier this month that Goodrem had lost her driving licence for speeding.

UK to ban gender stereotypes in ads. The UK’s advertising standards body will crack down on the use of gender stereotypes in ads, it has announced. The advertising code will be updated and enforced after a review found that harmful stereotypes “can restrict the choices, aspirations and opportunities of children, young people and adults”. The ASA said the changes wouldn’t ban ads depicting women cleaning or men doing DIY tasks, but said problematic ads would include family members making a mess while a woman had to clean it up alone, or a man trying and failing to undertake simple parental or household tasks. The new standards will come into force in 2018.

The ASA regulates ads in the UK according to a broadcasting code, can ban ads, and has the power to refer ads to the communications regulator, Ofcom, for further action. It actively monitors ads for breaches of the code, as well as takes complaints.

Murdoch fights back at opposition to Sky bid. Opponents of the 21st Century Fox bid for the rest of Sky are pressuring the UK government to revisit the question of broadcast standards (to which UK regulators have given Fox a clean bill of health). And that has Rupert Murdoch mightily pissed, so much so that a letter complaining about that and certain politicians was released to UK media, not just his titles, The Sun and The Times.

Fox has had its London lawyers write a narky letter to UK Culture Secretary Karen Bradley two days before she gives her decision on whether to refer the US$18 billion bid for a full competition inquiry. 21st Century Fox wants Bradley to refer the bid and not revisit the question of broadcasting standards. Fox said a reversal of the stance on broadcast standards would be “irrational”, and that that bowing to the pressure would “constitute the most blatant form of political interference”.

Bradley said on June 29 that she was minded to refer the takeover to the Competition and Markets Authority thanks to concerns that the bid could hand Murdoch too much power in the UK media sector. But based on a report by the UK media watchdog Ofcom, Bradley has already indicated there are no grounds to block the deal based on Fox’s commitment to British broadcasting standards. She also dismissed fears that Fox and its senior executives were unfit to hold a UK licence.

But a group of anti-Murdoch MPs, led by former Labour leader Ed Miliband and the Liberal Democrat leadership candidate Vince Cable, wrote to Bradley to try to change her mind, arguing Ofcom had made a serious legal error.

The politicians claim the watchdog should have taken the recent sexual harassment scandal at Fox News in the US and historic phone hacking at Murdoch’s UK newspapers into account. But Fox’s letter rejects this, saying the MPs have presented no new or substantial evidence — the threshold Bradley set when inviting responses ahead of a final decision on a CMA referral.

“Clearly the Murdochs are rattled by rightful scrutiny their bid and their corporate record are receiving,” said Miliband. “The Secretary of State must not bow to the outrageous attempts to intimidate her by the Murdochs. She must give due and proper consideration to all representations on whether to refer the bid to the CMA on grounds of broadcasting standards as well as plurality.”

That has the Murdochs rattled. Fox last week made it clear it would not be offering any further concessions on the independence of Sky News (which is the root of these concerns about media plurality). From the comments in the latest letter, that looks like a deliberate decision to force a competition inquiry which the Murdochs expect will go their way. Fox has already offered to fund a Sky News service for five years, with a separate editorial board. The regulator Ofcom gave that a conditional tick but Ms Bradley didn’t, saying she wanted to see more. Ofcom said it would likely reject any move to spin off Sky News, arguing that could make it weaker over time. — Glenn Dyer 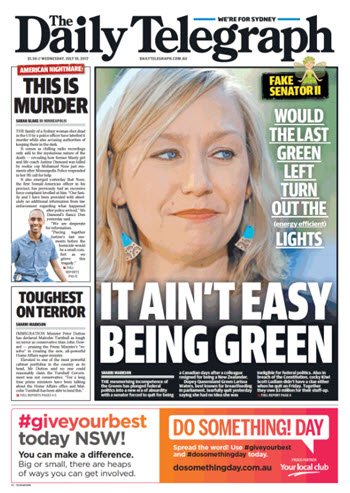 Glenn Dyer’s TV ratings. Nine’s night thanks to Australian Ninja Warriors — 2.32 million national viewers — 1.57 million in the metros and 668,000 in the regions. Bread and circuses win again. MasterChef got 1.15 million nationally while Seven and the ABC were left behind. SBS did OK with Tour De France back (great win by Bling Matthews). In fact Seven was third in metro main channels after Nine and Ten. Seven has gone camping for ten days to return, presumably, when the Ninjas finishes.

Tonight its Shaun Micallef’s Mad As Hell. Will he get even with Barrie Cassidy and Insiders for stealing a Bill Shorten Zinger on Sunday? Nina has more heart searching/angst/you know what on Offspring, discovers that she’s really a Ninja Warrior in anther life on Nine. Chaos ensues. Will she settle down with Vulcan at last? — Read the rest on the Crikey website

Foxtel and the strange case of BBC World News

Conflicts of interest abound in the story behind Ten’s collapse

Fifield could have at least said that the terms and conditions of the $30 million pork-barrel for favourable news from News Corp was left on a whiteboard but was accidentally rubbed off. Either way, he absolutely gets the sack.

The Murderorc family are behaving in their usual disgraceful fashion. If the Karen Bradley gives way to their intimidation it will, as Ed Milliband pointed out, be a failure of British “broadcasting standards as well as plurality”.

What? $30MILL of taxpayers money handed out to Murdoch’s Foxtel, and no screams and feverish rants from the mainsteeam conservative media about wanton corporate welfare, the Govt picking or playing favourites, affording this in tough budgetary times etc? Oh, I forgot, that media response is only when an ALP Govt rules.

No consultations to define cost benefit or criteria for targetted sports promotion, no monitoring of the spend by Foxtel?
That’s $30MILL of our money – what an insult from the discredited economic managers, the LNP. If it wasn’t tragic, it’d be a joke.