Breaking encryption news. The Daily Telegraph‘s investigative reporter Sharri Markson has the scoop (!) today on an NBN Co blog post from June about the use of virtual private networks (VPNs).

Headlined “EXCLUSIVE: How the NBN aids internet pirates”, the Markson article claims, among other things, that VPNs are used “to illegally download hit movies and TV shows” and are also used by terrorists and paedophiles. 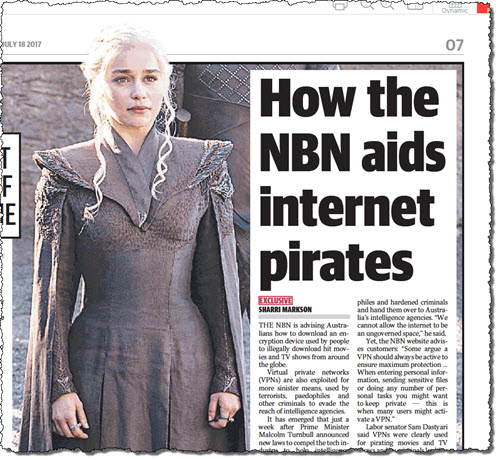 Yes, but they’re also used by a lot of regular people too. In fact, Ms Tips would wager that if News Corp has remote access for its staff, the Tele’s intrepid reporter herself is likely using the same technology used by these criminals that NBN Co is promoting. Stop the presses!

Sure, sometimes VPNs are used by criminals, in the same way that they also happen to use roads, or electricity, or water, or oxygen. The whole reason why people are up in arms about the government’s proposed crackdown on encryption is not because they’re opposed to chasing terrorists, but that weakening encryption for one person weakens it for everyone, and it makes it easier for those same bad guys to target innocent members of the public online. You know who else once recommended using VPNs? The Prime Minister.

Is it weird that NBN Co (a company that has no end users) is writing about VPNs on a blog? A little. Does that amount to supporting piracy and terrorism? Not so much.

Rupert lets rip on the F-35. We thought we’d give the flying^ heap of crap a rest, but not so at News Corp. In London, Rupert’s top masthead, the Times, has gone hard at the beleaguered project, revealing the version the UK is purchasing has a host of problems that will cost billions of extra pounds to address, including fundamental problems with its potential inter-operability with existing British defence systems. Oh, and remember that recurring problem with pilots suffering oxygen deprivation while flying a death machine at a couple times the speed of sound? As Twin Peaks fans might say, it is happening again — but then given no one knows what the “root cause” of the problem is, that’s hardly surprising. Given the helmet was so heavy it would snap the spines of pilots during ejection, and the ejection mechanism would have killed pilots of lighter-than-average build, we’re wondering whether all those millions of lines of code in the planes hasn’t developed sentience and is trying to kill its human masters.

^OK it frequently has trouble making it into the air, but let’s be generous

“… developing an untitled fictional scripted drama series based on the the music superstar’ real-life experiences … the drama is set in 1986 New York City and chronicles the rise of an ambitious bi-racial 16-year-old girl, an aspiring singer/songwriter who survived a difficult childhood to become the biggest selling female music artist of all time.”

Packer and Ratner were at the helm of production house RatPac until Packer sold his share in April. Carey recently referred to Packer as a “motherfucker”, so we don’t think any character based on him would be positively portrayed.

Murdoch’s new venture. James Murdoch, a director of News Corp, CEO of 21st Century Fox, and of course son of Rupert Murdoch, has just been appointed to the board of electric car and battery maker Tesla, along with Linda Johnson Rice, chairman of Johnson Publishing Co. It’s an interesting move when the campaigning of the Australian News Corp publications against renewable energy is taken into account. The Wall Street Journal reports Tesla was under pressure to appoint independent directors to the board, which is where Murdoch and Johnson Rice come in. So with James Murdoch on board, will that change the approach of the Murdoch empire to all things battery, renewable and electric? Or just when it comes to Tesla?

News of James Murdoch choosing to join the board of an electric car manufacturer is a pretty solid vote of confidence in the future for electric cars. However the likelihood of charging rushes means that these guys will be pushing for more despatchable electricity rather than less.