Hendo has fluffed it ... again. And other media tidbits of the day.

Today in Media Files, someone has hit the wrong button at Fairfax again, and the UK press regulator has found that the Daily Mail breached Prince Harry’s privacy.

Wrong button strikes again at the Fin. The subbing cuts may have gone a bit too far at the Fairfax papers. A Crikey tipster has spotted a message in the Australian Financial Review on Friday for a subeditor left in a now-corrected graphic on the online version of a story about the CPA, saying a subheadline was needed to explain the information: “Subby in here explaining the letter below”. 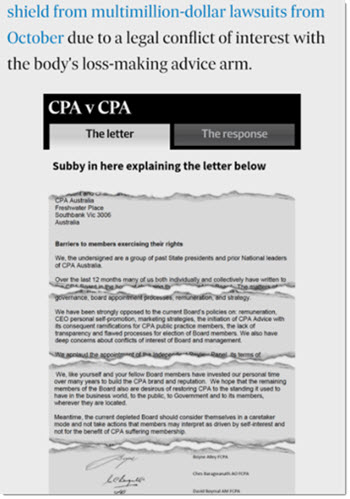 And over at The Sydney Morning Herald this morning, someone else has dropped the ball when laying out and checking today’s sports pages. On page 30, a brief about US swimmer Ryan Lochte’s court case from a robbery claim at the 2016 Rio Olympics.

But if you flip over to page 36, there it is again, on a remarkably similar layout. 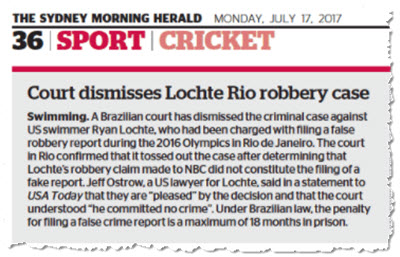 The Fin was the paper responsible for the infamous “world is fukt” front-page headline, sent to printers for the WA edition in 2014 when someone apparently hit the wrong button.

Last week, News Corp’s Daily Telegraph ended up with protesters out the front of its Holt Street offices in Sydney when the graphic for a story about the health of young Australians included the percentage of secondary school students who reported feeling same-sex attraction, apparently as an indicator of poor health.

Daily Mail beach pics breached Prince Harry’s privacy. The UK’s press regulator IPSO has ruled that the Daily Mail‘s website, Mail Online, breached the privacy of Prince Harry by publishing paparazzi pictures of him swimming with an article which showed him frolicking on a beach with his girlfriend Meghan Markle.

The story, published in March, was headlined: “Time to cool off! Happy (and hunky) Prince Harry enjoys a dip in the ocean as he and Meghan relax on the beach in Jamaica after his ‘wingman’s’ sun-drenched wedding”.

The pair were holidaying on a private beach at a private resort, and Harry told the regulator he had a reasonable expectation of privacy — the nearest public place was more than 500 metres away. Mail Online defended the publication of pictures by saying they were taken from a public beach.

IPSO said the article described the pictures as being taken at a private resort.

“The images, which had been taken without consent, showed the complainant wearing swimwear and engaging in private leisure activities in circumstances in which he had a reasonable expectation of privacy. Photographing an individual in such circumstances is unacceptable, unless it can be justified in the public interest. The publication had not sought to justify the publication of the images in the public interest. Publishing photographs of the complainant engaged in private activities, without his knowledge and consent, represented a significant and unjustified intrusion.”

Mail Online was ordered to publish the critical adjudication on its website.

Video of the day. In a deadly piece-to-camera for the 7pm bulletin last night, ABC Tasmania reporter Carla Howarth got into the spirit of things to read her script from inside a coffin. The story was about a DIY coffin-building workshop in Ulverstone, on the north coast of Tasmania. 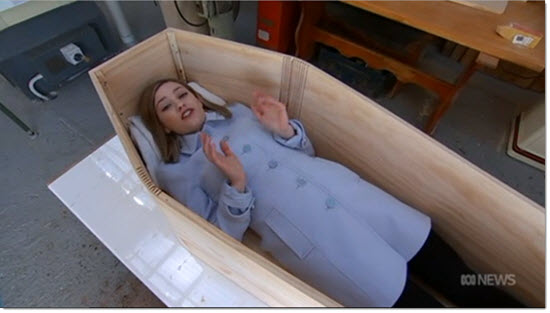 Hendo fluffs it again. Without wishing to poach on Comrade Rundle’s favourite hunting ground, we cannot resist pointing out yet another Gerard Henderson historical howler. In Saturday’s Weekend Australian, the sage of the Sydney Institute spent his entire column trying to debunk what (at least to him) is the heretical notion that Robert Menzies might have been a “progressive” Liberal.

This is, of course, largely a matter of opinion rather than fact, but it was when Henderson began reeling off a chronology of Menzies’ conservative achievements that he made yet another blunder. Here it is:

“In 1964, Menzies announced the implementation of conscription for overseas military service. He was the first, and only, prime minister to do so.”

No, he wasn’t. In January 1943, during World War II, the government led by prime minister John Curtin controversially extended the areas in which conscripts could be sent to, to include most of the South West Pacific. In the face of Japanese aggression throughout the region, the deployment of Citizen Military Forces conscripts beyond our borders was considered a legitimate response in the cause of national defence.

But there was no such credible justification for the 1279 Menzies conscripts wounded and 202 who died in Vietnam fighting the undeclared foreign war to which he had committed Australia. Henderson is free to keep garnishing the Menzies personality cult if he so wishes, but not to peddle myths by falsifying history. — David Salter

EasyJet boss to be named head of ITV. London media reports say ITV is expected to announce later today that Dame Carolyn McCall, the chief executive of easyJet, and a former CEO at the Guardian Media Group, will replace Adam Crozier who has been CEO for the past seven years.

She will be named at a tough time for ITV and other commercial media in the UK. The company warned in May it was expecting an 8% to 9% slide in ad revenues in the first half of its 2016-17 financial year. Last week, Channel 4 CEO, David Abraham, said the UK ad market had dipped into recession as advertisers cut spending in the face of the political and economic uncertainty caused by Brexit. — Glenn Dyer

Glenn Dyer’s TV ratings. Little Big Shots was rested by Seven (or postponed because Seven knew it would be crushed) until the Ninjas end next week. Seven is in fact ceding this week, and next to Nine. Ninjas last night had 2.52 million national viewers for Nine last night — around 200,000 more than a week ago for the debut. The metro audience jumped sharply to 1.75 million. MKR and MasterChef are the bread and Australian Ninja Warriors is the circus. MasterChef hung in there for Ten at the start of its finals week with 1.08 million viewers.

Emily, it’s always risky correcting pedants but on Vietnam casualties I’m afraid you’ve fallen into one of the potholes. I’ll take a similar risk by quoting Wikipedia (which happens to accord with my memory):

In total approximately 60,000 Australians—ground troops, air-force and naval personnel—served in Vietnam between 1962 and 1972. 521 died as a result of the war and over 3,000 were wounded.

Beg you pardon Emily, I should have read more carefully and found David Salter’s name before I too fell in the pothole.

Yeah but I think DS is talking about conscripts, not total casualties including regular soldiers. (Then again, I have a great record as a glass-house, pot-hole prone pedant.)