Australia's military will be able to respond to domestic terror attacks, and Malcolm Turnbull and Tony Abbott are urged to bury their differences. It's the news you need to know, by Sally Whyte and Max Chalmers.

SOLDIERS ON THE STREETS

The Australian Defence Force will be given new powers to both take the lead and assist state police forces in the case of domestic terror attacks, Prime Minister Malcolm Turnbull and Defence Minister Marise Payne will announce today. While police forces remain as first responders, the new powers mean defence forces could be seen on Australian streets, with the legal authority to shoot and kill terrorists, The Sydney Morning Herald reports. The new powers come as part of the fallout from the 2014 Lindt Cafe siege in Sydney’s Martin Place. Under current laws, domestic police can only call on the defence force if it is believed that police capability or capacity to respond has been exceeded. This provision will be abolished. The Daily Telegraph quotes Turnbull saying: “The overhaul will make it easier for Defence to work together with federal, state and territory police in the event of a terrorist incident.”

Internal Liberal Party power struggles are still front-page news, with battles fought on a few fronts this weekend. New federal Liberal Party president Nick Greiner says PM Malcolm Turnbull and his sniping and undermining predecessor Tony Abbott must meet face to face to resolve their issues or face losing the next election to the Labor Party, The Australian reports.

“All of this is not just about strong personalities, people who’ve lost jobs, got jobs, this is ­actually very bad for the country because what it’s doing is sucking the energy out of really difficult, complicated, long-term issues,” Greiner said yesterday.

In the SMH today, Griner writes:

“The challenge for the Liberal and National parties is to present a united, competent front against this revived brand of Labor populism, not to squander political capital on barren internal jousting over personalities or labels that are of little or no interest to the electorate.”

While former Victorian premier Jeff Kennett backs calls for a meeting between the pair, everyone is not on the same page. Conservative backbencher Kevin Andrews says it’s up to Turnbull to resolve the issue: “The central issue is how the PM, as leader, reconnects with our base and rebuilds the support we have lost. That is the priority.”

In other Liberal Party news, supporters of Tony Abbott have been accused of “stacking” next weekend’s NSW Liberal convention, where delegates will vote on changes to preselection rules.

British actress Jodie Whittaker has been announced as the 13th Doctor Who, the first woman to play the role. Whittaker, known to audiences of British crime drama Broadchurch, will take over from Peter Capaldi. She says:

“I’m beyond excited to begin this epic journey — with Chris and with every Whovian on this planet. It’s more than an honour to play the Doctor. It means remembering everyone I used to be, while stepping forward to embrace everything the Doctor stands for: hope. I can’t wait.” 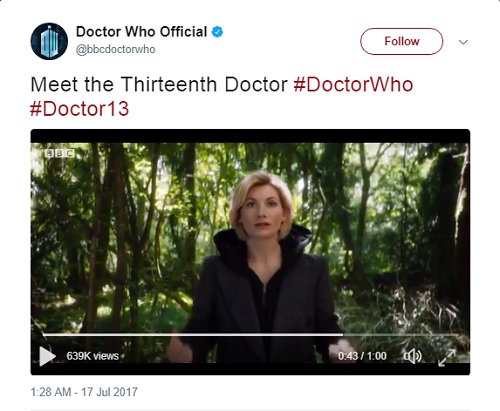 “I wonder if she could say the same of him?” That’s Foreign Minister Julie Bishop, responding to Insiders host Barrie Cassidy‘s question on how she would react if US President Donald Trump were to say that she was in “great physical shape” after he made the comment about Brigitte Macron, wife of French President Emmanuel Macron.

Holsworthy Barracks: Prime Minister Malcolm Turnbull will announce new laws that will allow Australia’s defence forces to be part of the response to domestic terror attacks.

Amsterdam, Netherlands: The third anniversary of the shooting down of Malaysia Airlines MH17, killing all 298 onboard, will be marked today.

Sydney: Justice John Sackar is due to hand down his judgment in the case between the Seven Network and former employee Amber Harrison. Seven has requested that Harrison pay their legal costs, which she says would bankrupt her.

Broome: Hearings continue into 13 youth suicides in Aboriginal communities in the Kimberley between November 2012 and March last year.

Whyalla: Sanjeev Gupta, the British billoionaire who is the boss of GFG Alliance, the company that has bought Arrium steel, is set to visit the Whyalla steelworks.

Your lounge room: Season 7 of Game of Thrones returns today.

The challenge to Liberals and Nationals is to unite and focus on winning — Nick Greiner (The Age): “The challenge for the Liberal and National parties is to present a united, competent front against this revived brand of Labor populism, not to squander political capital on barren internal jousting over personalities or labels that are of little or no interest to the electorate.”

COAG Energy Council turned around the Australian energy ship — Josh Frydenberg (Australian Financial Review $): “Political posturing by Labor states threatening to go it alone on the CET would only exacerbate problems in the market not diminish them.”

Government’s letter to conservation groups has ominous implications — Lenore Taylor (Guardian Australia): “A cynic might think the greenies have been winning in the court of public opinion so the miners are trying to silence them by convincing politicians to change the regulations and the law.”

Roger Federer has won his eighth Wimbledon championship, a record for the men’s competition that leaves him just one behind Martina Navratilova‘s all-time record. Federer was the first men’s player in 41 years to win the tournament without dropping a set. In the women’s, Spaniard Garbine Muguruza overcame 37-year-old, five-time Wimbledon champion Venus Williams.

Four Pakistani soldiers have been killed in Kashmir after being shelled by Indian forces. The incident is the latest in a series of deadly exchanges that have tested the 2003 truce signed between the two nations, which jointly rule parts of the territory. — Reuters

Several thousand people have turned out at demonstrations across Poland as the ruling conservative party tries to pass a bill that would move the power to appoint judges away from legal circles and vest more authority in the justice minister. — BBC

Waking up to the Trumpian world (New York Review of Books): “A washed-up British tabloid journalist, a tasteless Russian singer with a filthy rich father bankrolling his career, a corrupt Russian lawyer, an American reality TV star running for president, his son, and a tacky international beauty pageant that binds them all together. This list reads like an insult to American democracy. It also provides some clues about what really happened.”

Did Airbnb kill the mountain town? (Outside): “From Barcelona to Boston, the world has been grappling with the ­arrival of home-sharing platforms. Amid any number of skirmishes — neighbor against neighbor, tourist against townie, lobbyist against legislator — cities have scrambled to get a handle on this ‘wild west’ (one of the most common descriptors of the new home-rental landscape) and rushed to enact regulations. Everywhere you look, the battle is raging.”

Greens fail on sexual assault allegation (The Saturday Paper): “The final report was zealously guarded by the party to prevent its leaking. ACT Greens members, entitled by their membership to read the document, had to make an appointment and read it in central office.”

The general joy of Roger Federer, Wimbledon champion once again (The New Yorker): “He spotted Yuichi Sugita, a twenty-eight-year-old Japanese player who had just notched his first match win in the main draw of a Grand Slam. Federer turned and came down the hall toward us, then congratulated Sugita on the excellent win. It was a small moment, easy for Federer; still, it was something to see. Federer seemed to enjoy the encounter as much as Sugita did.”

Police are trained to protect lives. Soldiers are trained to kill. This move to allow soldiers to fight on home soil is stupid and dangerous. Has anyone reported on the number of civilian casualties in places where our ADF are working overseas? Expect them on our own soil.