With friends like these … Given the sheer amount of taxpayer money being wasted making defence equipment in Australia when we could be saving billions buying the stuff overseas, the government is understandably keen to boost our exports of Australian-made weapons and other military gear. But that immediately creates a problem: when you flog weapons, you’re usually flogging them to countries with dodgy human rights records. After all, the world’s major developed democracies are all exporters too — they’re not normally going to be interested in buying our stuff.

Defence Industry Minister Christopher Pyne has already copped grief for flogging arms to one of the world’s most objectionable human rights abusers, Saudi Arabia, an Islamic fundamentalist theocracy that systematically oppresses women, treats foreign workers as slaves, refuses to have national elections and is engaged in a giant war crime against the people of Yemen. On the weekend, Pyne told Fairfax’s national security guru David Wroe that he has his sights trained on another Gulf state theocracy, the UAE. “Why wouldn’t we want to cement our relationship with a country like the UAE, which shares many of our values in terms of the geopolitical issues?” said Pyne. Well, apart from the UAE’s shocking human rights record and loathing of free speech — but then Pyne did caveat his remarks by referring to “geopolitical” values. Right on cue, The Washington Post revealed that the UAE had been behind those incendiary false comments attributed to Emir of Qatar, which sparked the current high-stakes stand-off between Qatar and its regional neighbours. So the UAE used hackers to plant the pretext for the boycott and blockade of Qatar by the Saudis, Bahrain and Egypt. And then they got found out. Yep, sounds pretty Five Eyes to us.

Joyce tells GQ he and Turnbull aren’t mates. To our great disappointment, politicians doing interviews and photo shoots with GQ magazine seem to have learnt a lesson from Greens leader Richard Di Natale’s black Wiggle moment, with deputy PM Barnaby Joyce staying sensible in a suit, RM Williams boots and an Akubra in his chin-wag with the magazine. In true Joyce fashion, the member for New England doesn’t hold back in the chat, revealing that he and PM Malcolm Turnbull aren’t best mates: “We respect each other and work closely together, and we’re friendly… but we’re not close.”

He also reveals that when it came to discussions between the two over the carbon tax years ago, Joyce was removed from the room after a “huge blue”, with “shouting, screaming, the whole lot”:

“Well, other people kept a cap on it by getting me out of the room. Bundling me out like I used to do folks at the Wicklow [a pub where Joyce worked as a bouncer when he was a student]. So after that, it was raw but now we respect each other. We work well together. He completely trusts my confidence and I trust his.”

Joyce says his experience as a bouncer gives him a unique way of judging people he meets in politics:

“No, but it does help fine-tune your skills for working out who can really hurt you and who’s a bluff. And it sharpened my contempt for people who throw their ego around. I still find myself sizing rivals up and thinking, ‘You’re not that thick a wheel, mate.’ In politics, that sort of bravado usually comes from people who’ve never done a hard day’s work in their life. The Wicklow taught me that if they said that anywhere other than Parliament, someone would be handing them their teeth back on a plate.”

GQ‘s Angus Fontaine probes Joyce on said judgement of his political foes, to which Joyce gives this assessment of Labor Senator Doug Cameron: “Dougie Cameron is a crazy, left, lunatic unionist but if you told him where you hid your keys, he wouldn’t tell anybody.”

Kiribati revisited. Minister for International Development and the Pacific Concetta Fierravanti-Wells and her opposition counterpart Claire Moore are jetting off to the warmer climate of Kiribati today, with Fierravanti-Wells saying in a release that they will meet the Kiribati President Taneti Maamau and open a primary school. Mention of the Pacific country reminds Ms Tips about one of her favourite moments in recent political history — the vision of Labor leader Bill Shorten dancing with locals in November 2o15, showing off his dad moves. Despite watching it repeatedly at the time, we think the vision gets better with age. 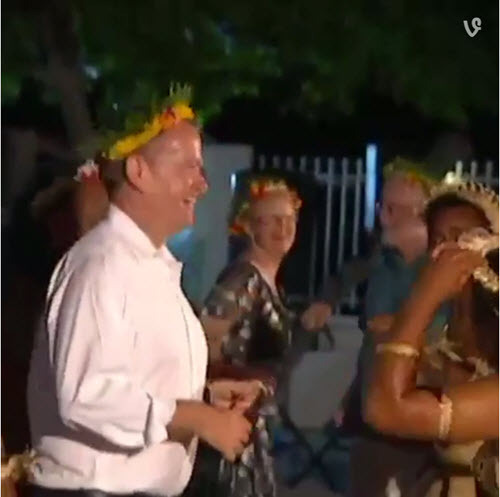 Cash’s new Fair Work mates. On Friday, Minister for Employment Michaelia Cash announced three new deputy president appointments to the Fair Work Commission. That they are all from employer-aligned backgrounds should be surprising to no one who follows these things. The announcement only listed the former employers for two of the appointments, Abbey Beaumont and Amber Millhouse. Beaumont is the human resources and employee relations manager at Fortescue Metals Group and Millhouse is a workplace relations lawyer for Seyfarth Shaw, which provides advice to employers.

The third, Ian Masson, got only a reference to his “extensive experience as a workplace relations manager with an extensive career in the resources industry, most recently in Victoria”. For the last two years, Masson has been industrial relations manager for Exxon Mobil. Fairfax’s CBD column today reported on his complaints to the AMMA conference in 2014 (back when he was at Woodside) that “unions’ ‘monopolistic rights’ in the bargaining process and the lack of ‘effective alternative agreement-making options’ was something that needed fixing”.

He also told the conference that companies had to deal with “the legislation that exists at the time, and navigate your way through, and not use the legislation as an excuse as to why you can’t do things”. This is something Exxon Mobil certainly did during Masson’s time as a senior member of the IR team. During the long and ongoing pay dispute with oil and gas workers, the company threatened to terminate their agreement and cut their pay by up to 40%. As Crikey has previously reported, the termination of agreements is a controversial — but legal and increasingly popular — method by which employers can tip the balance in their favor during agreement making, dropping the basis for negotiations from more generous agreement provisions to the minimum entitlements of the award. Why not mention his time with Exxon Mobil? We would have thought his experience dealing with the commission and his understanding of how employers can undercut conditions would be very relevant to his appointment?

Eric Beecher’s second career. Crikey boss Eric Beecher’s name often pops up in conversations about the future of the media — but we were shocked when a tipster told us Beecher’s face was showing up in one of the murkier parts of the media’s future (and present). Fake news site The Jackson Telegraph, purporting to be news from the US city, uses a photo of Beecher as a byline dinkus for “Dean Dwyer”, author of gems like “Cop accidentally overdoses during arrest”. The other author photos appear to be stock photos. 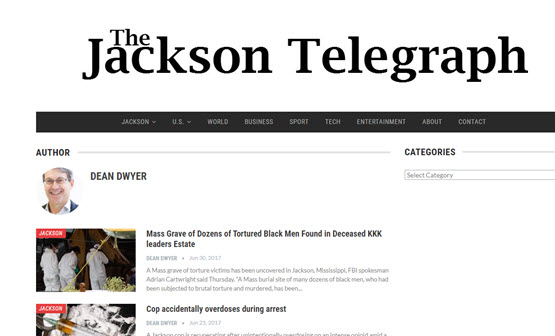