Good news and bad news. The staff working for Education Minister Simon Birmingham know how to let you down easy. Birmingham sent these letters in May to schools alerting them to changes in their funding arrangements under Gonski 2.0. The letters telling schools they would get a funding increase were triumphant, with the information pertaining to the school featured on the first page of the two-page letter.

The letter telling schools that they would be receiving less funding was not so triumphant, and the information regarding a decrease wasn’t featured until the second page. As the Catholic schools’ fight against Gonski showed, though, they did notice they were being snubbed. 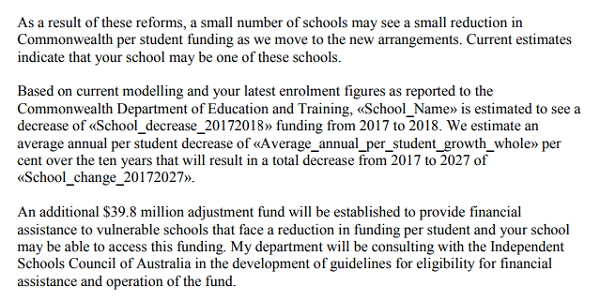 K-Rudd to release autobiography of years before anything happened. Former prime minister Kevin Rudd has confirmed that he has written a book, to be titled “Not for the Faint-hearted”. As reported in Crikey last month, the book will be published by Pan Macmillan (so that’s why they wouldn’t return our calls) and will be released in October this year, just in time for the Christmas season. The announcement left a lot to be desired though, with Rudd tweeting that it would cover “the highs and lows 1957-07”. No offence to K-Rudd, but everyone knows the really juicy revelations that we want to read about all happened after 2007. Does this mean we have to wait until the sequel? Will there be a sequel? Books by pollies don’t generally sell that many copies — former PMs Julia Gillard and John Howard are exceptions to the rule. Will many people be interested in Rudd’s early years without the years of power? 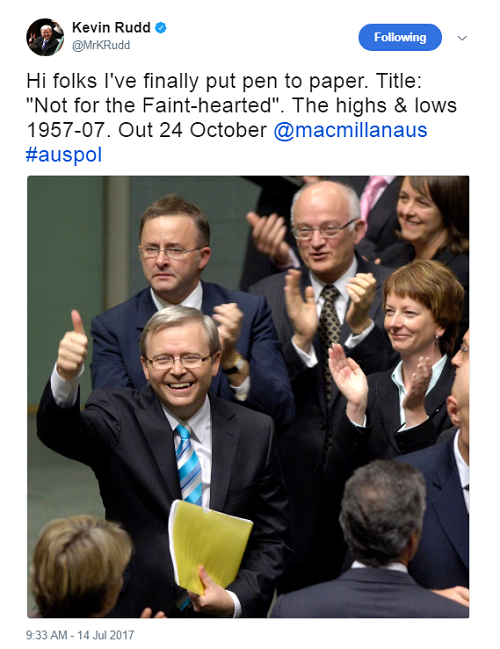 On a good wicket. Earlier this week, Prime Minister Malcolm Turnbull told a London media conference that he wanted to see the current dispute between Cricket Australia and players to be settled quickly: “Forty years ago I was working for Kerry Packer setting up World Series Cricket. So there is a sort of a players/administrators conflict that’s got a certain ring about it, a resonance about it, for me,” Turnbull said.

“But, Australians want their team on the field beating the Poms. I encourage both sides to settle it as quickly as possible.”

The PM made it seem like his connection to cricket’s troubles was a thing of the past, but it turns out he is much more closely connected than he let on. The ABC reported this morning that the PM has sought advice from Cricket Australia’s chairman David Peever on who should be appointed as the new secretary of the Defence Department.

“The ABC can reveal he has recently turned to former Rio Tinto managing director and current Cricket Australia chairman David Peever for guidance. In 2014, the former mining boss led a sweeping examination of the Defence Department known as the First Principles Review, and until last month was still chairing the oversight committee charged with implementing its recommendations.”

The Prime Minister clearly knows Peever, so why didn’t he say so in London?

Watch this space. The Reserve Bank clearly has something to say on the Australian economy and monetary policy, with some of its most senior executives on the speaking trail in the next two weeks, led by governor Phil Lowe and his deputy Guy Debelle. Lowe was last in the public eye on June 19 when he focused attention on the weak pace of wage growth by urging Australian employees to ask their employers for big pay rises. This month he speaks on July 26 to the Anika Foundation lunch, an annual Sydney event where the speech is always from the current governor of the Reserve Bank. The topic of his speech hasn’t yet been posted by the RBA on its website.

Nor has a topic been revealed for the appearance on Wednesday in Sydney for Alex Heath, the bank’s head of the economics analysis department, at the women in economics panel at the Australian Conference of Economists, Sydney. And we are yet to see the topic for the speech on Friday, July 21, from Michele Bullock, the RBA’s assistant governor (financial system), at the Melbourne Institute/The Australian Economic & Social Policy Conference in Melbourne. Politicians tend to seize on comments from senior RBA figures when their message aligns with the barrow they are pushing, so look out for that in the next fortnight.

“Leave it to Peever”?
Turnover and his ties to the Rio Tinto boss that wanted to damn, slash, burn mining unions ….. where he gets his opinions on unions and workers; the joys of stagnant wages and unaffordable homes?

If the PM is looking to anything remotely connected to CA he is a damned fool. Cricket Australia, especially at board level are incompetent and we should have seen the CEO and High Performance manager gone some time ago.

I’m horrified to agree with the Libs on this…but…

I sent my step daughter to a private school and have no issue with having to have paid their fees. She went on to do well and became a teacher herself. Private schools should cover their own fees and not try to get public money above and beyond what public schools need.

All kids need a decent shot at a fair go…that applies to Universities to.