Iced over … Murdochs told to cool their heels … is Fairfax a good investment? …

Today in Media Files, the newspapers measure up the Larsen C iceberg for their readers, and News Corp’s bid for control of Sky in the UK has been delayed again.

Newspapers measure up iceberg. How big is that giant iceberg that broke away from Antarctica? Is it two ACTs, or one Kangaroo Island? Helpfully, newspapers are putting it into a local context for its readers. For Queenslanders, The Courier-Mail says its the “length of the distance from the Sunshine Coast to the Gold Coast”. 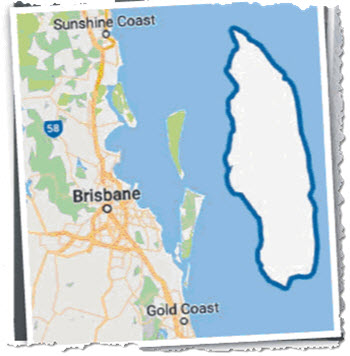 The Sydney Morning Herald measures it as covering “an area from Sydney to Newcastle”, while The Daily Telegraph just put it at twice the size of the Australian Capital Territory. 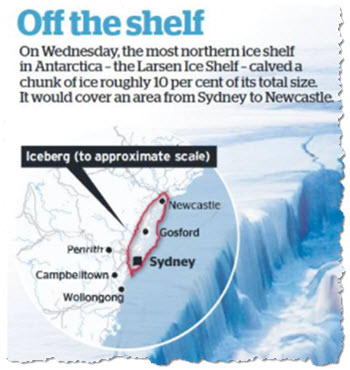 In Melbourne, the Herald Sun has a map to show the iceberg in comparison to the city, but The Age has pulled in a syndicated graphic that shows a comparison to Hawaii. 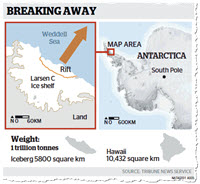 In Adelaide’s Advertiser, it is a bit bigger than Kangaroo Island.

For a national measurement, The Australian Financial Review stuck with syndicated news copy from The New York Times, putting the iceberg at the size of Luxembourg.

Overseas, Quartz Media has had a look at how the iceberg is being described around the world. In Spain, it’s as big as 10 Madrids, in the US it’s one Delaware, in Turkey it’s four times the size of Istanbul and in the UK it’s a quarter of the size of Wales.

News Corp bid for Sky delayed. The Murdoch family’s US$18 billion bid for control of UK pay TV giant Sky plc is set to be delayed until the end of the year after widespread media reports in London that 21st Century Fox will not offer any further concessions to protect the editorial independence of Sky News. That means the bid (for the 61% of Sky that Fox doesn’t own) referred to a full-blown competition inquiry, which will take up to 24 weeks.

Last month, UK Culture Secretary Karen Bradley told the House of Commons she had set Fox a deadline of 5pm this Friday (London time, or 2am Saturday, AEST) to offer fresh undertakings that might remove concerns the takeover would hand Rupert Murdoch’s empire too much power over the UK media. It was thought Fox would do that because Murdoch wants the bid wrapped up sooner than later.

But now reports say that Fox will not be offering a new arrangements on the future of Sky News, so the will be bid pushed to the Competition and Markets Authority for a new investigation into whether the deal will affect media plurality in the UK.

The UK media regulator Ofcom has already conducted a three-month inquiry, that concluded that while there were concerns over plurality, it found no reason to block the deal on the grounds of broadcasting standards. A separate report from Ofcom also found that Fox and its chief executive James Murdoch would be “fit and proper” holders of a UK broadcasting licence. Fox had offered to establish an independent editorial board for Sky News, and to ring-fence funding for the channel for five years. Ofcom said these mitigated the plurality concerns, but Bradley rejected the offer, saying Fox needed to go further.

The Financial Times reported: “People with knowledge of the process said Fox executives concluded that the government’s reduced majority following last month’s UK election had created political uncertainty that made it less likely that the deal would be waved through”. According to The Guardian, “With a weakened Tory government failing to win a parliamentary majority, there is also a view that there is no hope of accepting any offer over fears it will be seen as a political decision”. We will find out early tomorrow morning. — Glenn Dyer

Blackrock comes back to Fairfax. Blackrock, the world’s biggest fund manager, remains a believer in the Fairfax Media-Domain spin-off story, even though two big US private equity sharks in TPG and Hellman and Friedman didn’t find the Fairfax offering as tasty as they first thought. The duo walked away from mooted bids for Fairfax at about $1.22 to $1.25 a share, or more than $2.8 billion, and the Fairfax shares slid back under $1 ($2.22 billion), where they have remained. Blackrock re-emerged with a 5% stake in Fairfax Media in a filing on Monday, six weeks after it sold down its initial holding to less than the 5% disclosure level. Blackrock had originally emerged as a 5.02% shareholder in Fairfax on May 5, then traded down in a selling spree and dropped under the 5% level in late May.

But according to Monday’s filing after a concentrated buying spree in June and early July the holding hit the 5% stake late last week. The filing also reveals that much of the buying was done well above the current price of 96 cents. In fact, the bulk was done in June at prices above $1.20 a share (the high appears to be $1.25, which is just one cent under the most recent high for the shares). Blackrock kept buying shares up to June 30 when it emerged that neither TPG or Hellman and Friedman had put in bids for Fairfax.

That was confirmed on July 3 when Fairfax said it was going alone with the spin-off of part of Domain later this year. Blackrock started at 97 cents the same day and bought more than a million Fairfax shares last week at less than $1 each. Much of its holding was bought earlier in the year at prices well under $1 each. But it did splurge in June buying over 5 million shares above $1.23. — Glenn Dyer

Skull picture breach Press Council standards. The Geelong Advertiser breached Australian Press Council standards with a front-page composite picture of a skull representing half a face, and the face of a missing man representing the other half. The story connected a skull that had washed up in Corio Bay with missing man Paul Kingsbury. The Press Council found that the image was likely to cause distress to the man’s family and the community, that the picture was unlikely to help in the investigation, and the man’s criminal record did not justify using the image.

Glenn Dyer’s TV ratings. Hangover night. After the sparkle and hot air of the Ninja Warriors and grunt and sweat of Origin three, last night was a perfect example of let down TV. Nothing happened, no program dominated except MasterChef (1.24 million and the most watched non news program) which again stood out for at least being of interest, even to non-foodies. The Tour De France saw some great racing through the rain, mists and fogs of the Pyrenees and a change in the lead.

On Nine, the tiresome football shows bored and bored. Brisbane viewers of the NRL version celebrated the Origin win by tuning in with 126,000 and outnumbering the 96,000 who watched the Sydney version (which was down on previous weeks. Sore losers?). In Melbourne 184,000 watched the AFL program. Nationally Janet King on the ABC at 8.30pm was watched by 728,000 viewers for the final and The Footy Show by 693,000.

The weekend — football of various codes, Ninjas on Sunday night, the TDF. Oh and Seven insults our intelligence for a second time with Little Big Shots on Sunday night. After the dross that is Yummy Mummies, this one is just weak — an old TV go to for ratings black holes. Children should be seen in small doses on prime time TV, as should animals. Adults quickly tire. — Read the rest on the Crikey website

At the end of the day, it doesn’t matter what the size of the iceberg is, it was already floating, so it doesn’t add to the sea level rise.

What will matter, is what happens with the ice it was holding back before it broke off.