Chris Smith apologises, Prue MacSween doesn't and the Daily Tele kind of does. Plus other media tidbits of the day.

Today in Media Files, 2GB’s Chris Smith has apologised for comments made by Prue MacSween on his program while The Daily Telegraph‘s editor has offered a non-apology for a graphic in yesterday’s paper.

Tele‘s same-sex health risk graphic was ‘misinterpreted’, says editor. The Daily Telegraph‘s editor Chris Dore has issued a non-apology for a graphic in yesterday’s paper used to illustrate the health of young people, which included same-sex attraction alongside drug and alcohol use, psychological distress and weight. 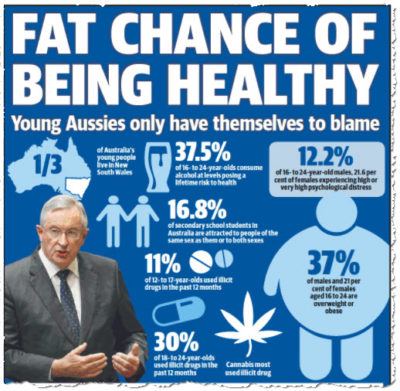 The graphic was widely criticised on social media yesterday and Dore published a note on social media — but not in the newspaper today — saying the illustration had been misinterpreted. The story was based on statistics from a NSW government report looking at young people’s lives. Dore doesn’t apologise or explain how the graphic was approved, instead saying the story did not suggest, or intend to suggest, that same-sex relationships were unhealthy.

“(The report) is a statistical picture of young people’s lives, from where they live to how they live. Unfortunately the presentation of the story has been misinterpreted … There is no judgement expressed at all in the story other than about diet.”

Cuts announced at News Corp earlier this year included cuts to subeditors and production staff, who, among others, are responsible for checking copy and checking pages before they go to print to make sure graphics and pictures cannot be “misinterpreted” against stories and headlines.

The Tele‘s got the Origin blues. What a difference a day makes. Yesterday’s Daily Telegraph was full of bravado for NSW’s team in last night’s State of Origin decider, with a wrap-around, editorial and nine pages of sport dedicated to the game. 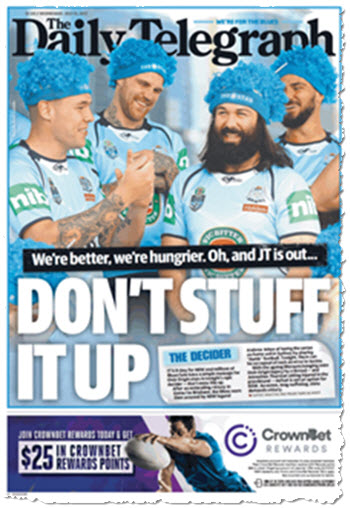 But come this morning, as the Blues come to terms with the loss, all mention of Origin has been banished from the front page, bar a cheeky pointer headlined, “QLD LOSES … its bid for the Olympics”. 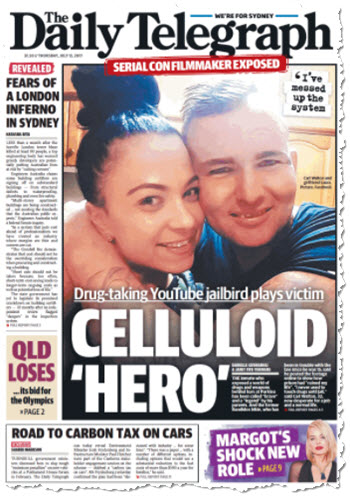 Origin sledging between the Tele and Brisbane’s Courier-Mail is a hallmark of the series each year. When Queensland lost the series in 2014, its front page featured a doctored Blues team full of famous con artists, under the headline, “FRAUDS”.

Fine issued over spam marketing emails. An e-marketing company has been fined $39,600 for sending out spam emails without the name and contact details who authorised the message. Upside.Digital was fined after the Australian Media and Communications Authority found the company had sent a “significant number” of marketing emails that did not carry the required authorisation. The company had also sent emails through a third party that it could not show it had consent for.

Smith apologises, but MacSween doesn’t back down over Yassmin Abdel-Magied comments. 2GB radio host Chris Smith has apologised over comments made by commentator Prue MacSween on his program yesterday. MacSween and Smith were talking about Yassmin Abdel-Magied when MacSween said if she’d seen the writer — who has recently announced she’s moving to London — she’d have run her over. Smith apologised on his program shortly afterwards, but MacSween was unrepentant, calling those going after her on social media “Twitter ferals”. 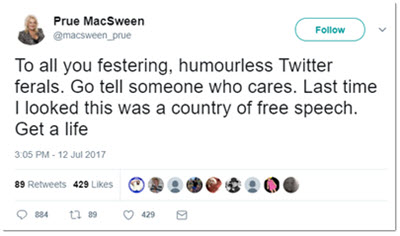 Macquarie Media executive chairman Russell Tate told Crikey that 2GB had spoken to MacSween about her comments, which she agreed were in poor taste.

“The comments were not intended to be anything other than a flippant expression of disgust with Yassmin Abdel-Magied’s publicly expressed comments … she will be counselled further on the incident before any future appearances on 2GB.”

Broadcast regulator the Australian Communications and Media Authority cannot accept complaints until complainants have first lodged one with the broadcaster.

NY Post calls Trump Jr an idiot. The New York Post has blasted Donald Trump Junior, the US President’s son, over a meeting with a Kremlin-connected lawyer who he believed would offer compromising information about his father’s opponent in the presidential campaign, Hillary Clinton. In an editorial under the blunt headline, “Donald Trump Jr is an idiot”, the Post quoted Kyle Smith: “Don Jr. is why Nigerian email scammers keep trying their luck,” and called the blunder “criminally stupid”.

The Trump Jr story has also called for an explanation from The New Yorker of its notoriously old-fashioned usage of grammar. Its style guide demands a comma after Trump Jr’s surname, and a full-stop after the Jr, causing some readers a headache when there is also a possessive apostrophe: 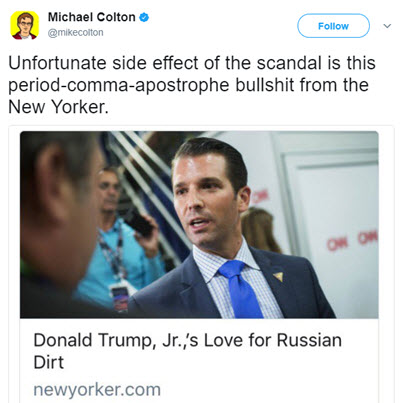 The New Yorker’s copy department boss Andrew Boynton explains the messy headlines as a “collision of conventions”. “This styling doesn’t come up very often in the magazine, and its occurrence in a headline of sorts has brought it a weird kind of notoriety,” he wrote.

First of News Corp restructures announced for Wall Street Journal. The pace of change at News Corp’s Wall Street Journal continues, announcing the second major re-organisation of its newsroom in 19 months, this one aimed at transforming the 128-year-old newspaper into a mobile-first news operation. And it is clear that a further massive change is coming in the paper’s editing process similar to the one that is causing problems at rival New York Times.

The big question for News Corp and the Murdochs is whether this revamp of the Journal drives similar changes in the other papers in the UK (The Times and The Sun) and in Australia, starting with The Australian and then the tabloids. The Journal management and no doubt News Corp’s board and CEO Robert Thomson support this dramatic change, meaning there is a good chance these changes will happen elsewhere. Facebook and Google and social media generally were not mentioned in the memo, but they were there in spirit and as the unmentioned gorillas in the newsroom.

The most dramatic changes are in structure and personnel. In a memo, editor-in-chief Gerard Baker assured staff the “far-reaching reorganization” wasn’t a “job-cutting exercise” and that the newsroom’s count of about 1300 positions would remain “roughly stable”. Baker told staff that as resources dramatically shift toward digital and mobile initiatives, some existing roles could be eliminated, forcing some people to find other positions within the company. — Glenn Dyer

IVE Group announced Thursday that its subsidiary, IVE Group Australia Pty Ltd had entered into the agreement. The majority of titles will transition to IVE from mid-October, with the remaining two mastheads (New Idea and Better Homes & Gardens) moving in January 2018.

The shift is an obvious cost-cutting exercise. Last October Pacific chopped 20% of its staff in a matter of days. It is suffering from falling revenues and profits, but it’s not alone. IVE must have offered a low-cost printing deal to drag Pacific away from its long-time partner, PMP. The deal leaves PMP with magazines from Bauer Australia and NewsLife (part of News Corp Australia), as well as hundreds of catalogues and other publications for retailers and marketers. Distribution for the Pac Mags titles remains with PMP’s Gordon and Gotch. Gordon and Gotch and PMP also handle the distribution for newspapers from Fairfax Media and News Corp Australia. PMP claims to distribute 150 million newspapers a year for Fairfax and News Corp. — Glenn Dyer

Glenn Dyer’s TV Ratings. Origin, you monster. Good on Queensland for winning — particularly for the likes of Cameron Smith, Cooper Cronk, Billy Slater and Jonathan Thurston (who deserved to go out on a high last night).

Next for Nine, the Ninjas on Sunday, Monday and Tuesday night and Seven can go back to contemplating misery with Behave Yourself and Yummy Mummies. For the rest, it didn’t matter. The ratings for Offspring (618,000 nationally) and Shaun Micallef’s Mad As Hell (668,000 nationally) were squashed last night, though Gerard Henderson and his curious media obsessions were sent up very nicely on Mad As Hell. And poor Nina’s desire for domestic tranquility continues. Perhaps she should have watched the Origin game and barracked for Queensland.  — Read the rest on the Crikey website

MacSween – living the dream in the land of free speech? She’s not complaining is she?

Donald Trump Jr – without the requisite full stops and apostrophes – is a chip off the old block. Not much good genetic material to be inherited there.

The entire assembly of Deplorables on the Chris Smith show is a study in political pathology.